The show's centerpiece catastrophes are still impressively imaginative, but there's a disconnect when it moves to everyone's private lives. 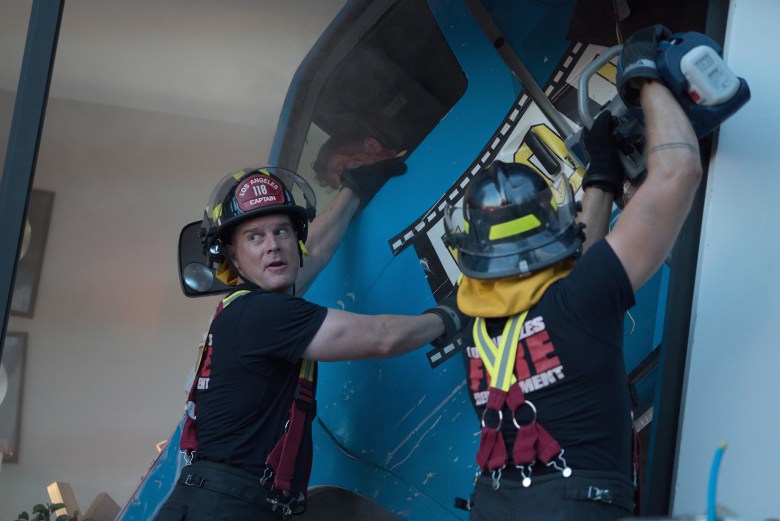 “911” is the kind of show that would feature a massive, city-crippling earthquake at the end of the first hour of its season premiere instead of its season finale. Teased to kick off Season 2, the latest escalation from the Fox drama is another example of the show committing to the broadcast niche it’s carved out for itself: a first-responder drama that lives comfortably and loudly at opposite poles of an end-of-the-world spectrum.

True to form, the series returned to the air with another episode telling life and death stories, living side by side with the relatively incremental changes for the people tasked with responding to the most bizarre Los Angeles horror stories. Watching the team mobilize and literally deflate a mechanic is an effective early example of how compact and efficient some of these “911” stories can sometimes be. This one also pulls double duty introducing the firehouse’s newest shirtless hunk, Eddie (Ryan Guzman). Relieving the pressured air from the mechanic’s abdomen gives Eddie a chance to demonstrate his military bona fides and cut through some meaty jargon, and it’s no wonder Buck (Oliver Stark) feels somewhat expendable by comparison.

Sometimes the overstuffed nature of “911” allows it to really turn into the skids of its own outrageousness. Even with a giant kickoff set-piece of a celebrity tour car driven through the roof of a house and a “Grey’s Anatomy”-reminiscent sequence where the team has to diffuse a live grenade round from a guy’s lower leg, the better indication of the show’s truest self in “Under Pressure” might be the doomed microwave prank. (It’s one of those “911” segments that almost seems reverse engineered from the call itself.)

At once this horrible YouTube stunt gone wrong feels like a Loganpaulstradamus vision of the deadlier fame-grabs of tomorrow, while still so trapped in a 2005 conception of what the internet is that it picks “Sugar, We’re Goin’ Down” as the backing track. (To be fair, we’ve all probably done at least one dumb thing to a Fall Out Boy song at some point in our life.)

These smaller scale incidents carry with them some unspoken need to escalate at all costs, the thing that presumably requires that this poor, unfortunate dude be wearing a suffocating plastic bag in addition to being crushed by quick dry concrete. The weirdness that this show strives for — sometimes to an almost-fatal degree — is enough to carry these emergency responses. Segments like this that force the team to come up with a solution to a problem are captivating enough without the extreme ticking-clock urgency that often comes with it. But that forced layer comes from smushing so many of these predicaments into the course of an hour.

Maybe a solution like “just hammer and chisel the guy’s head out” is the only way to have saved him if/when that occurred in real life. But when rushing to get this story out of the way, it leaves the necessity to sneak in some backstory shortcut like “He’s been my best friend since kindergarten!” as a cheap way to distract from the fact that some of these incidents are almost solely means to a dramatic end. 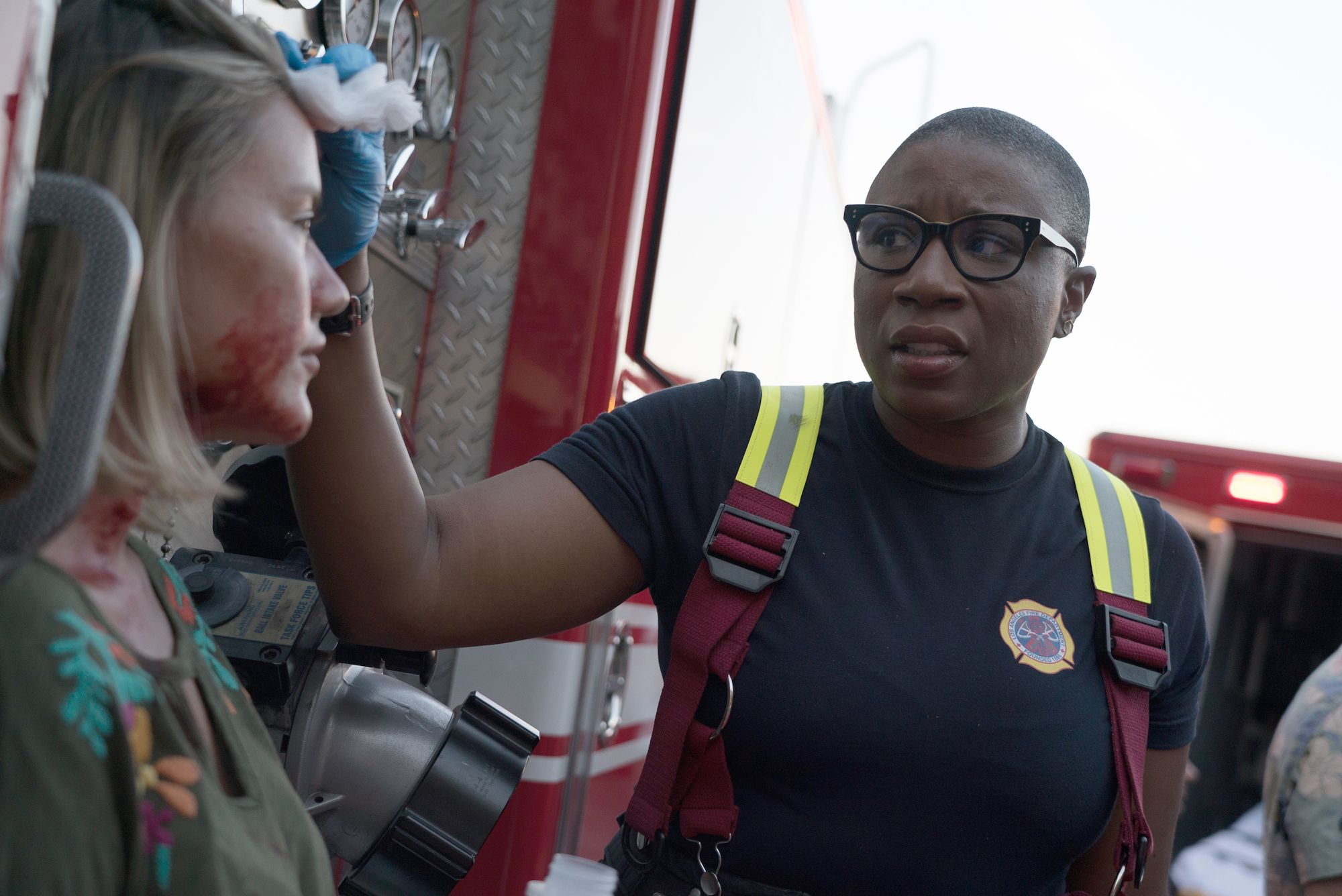 At least those protracted scenes of medical problem-solving give the show some slight breathing room in showing the main character’s personal lives. In a carryover of the most promising development from the Season 1 finale, Athena (Angela Bassett) and Bobby’s (Peter Krause) relationship returns, albeit with a bit of a stumbling block. Their dining room confrontation is another example of the show falling back on writing that might as well be italicized, underlined, and bolded on the page, but the show has found a satisfying on-screen pairing in Bassett and Krause. The former gets to play Athena’s vulnerability while taking advantage of the character’s bolder side. Meanwhile, Krause playing a stoic man’s version of suave is another entry in the ongoing collection of Bobby counterbalancing the odd broadness of the show with a specific kind of removal that weirdly works.

And then there’s the calendar subplot. Chimney being the surprise pick would have carried a little more weight had it not been telegraphed, but again, watching a conversation between Kenneth Choi and Aisha Hinds is the kind of scene that makes it so easy to keep coming back to this show. Seeing them latch onto some real emotional weight, even in the middle of their sometimes-soapy off-the-track lives, is a real testament to the cast’s continued strength.

Heading off some of the inevitable Connie Britton comparisons, the show wisely chooses to make newcomer Maddie (Jennifer Love Hewitt) Buck’s sister rather than his love interest. Britton managed to keep Abby from being a perfunctory connection to the fire/police threads by bringing some care to the interactions with her ailing mother. It’s too early to say if Maddie’s fraught relationship with her ex will offer Hewitt the same chance, but keeping the familial connection between her and the fire crew might benefit the show in the long run, even if it’s as clunky as some of the pair’s catch-up dialogue here.

Regardless of how that plays out, Season 2 has already shown that it’s already in the business of heightening things whenever possible. Maddie has to throw her phone against the wall after getting that threatening call. Bobby has to toss the cement bro’s phone in the pool (instead of leaving it at that fantastic expression Krause gives when he turns around and sees the camera). The grenade absolutely has to explode, leaving the charred-out remains of a fire truck in its wake. In the past, “911” has demonstrated better ways to add on those sensational layers. Perhaps what’s coming up in the second part of the premiere will galvanize the trio of crews around something that’s a more natural result of their immediate circumstances.

“911” is constantly operating at such a high emotional level that it would take something really drastic to make a severe challenge for everyone involved. Lucky for them, that snaking line of cracked pavement looks like the chance for them to do just that. The real test, though, is what “911” is ready to do when the dust settles.

This Article is related to: Television and tagged 9-1-1, Fox, TV Reviews