There are no easy answers in Paul Weitz's operatic drama, which stars Moore opposite Ken Watanabe in a delicately rendered emotional thriller. 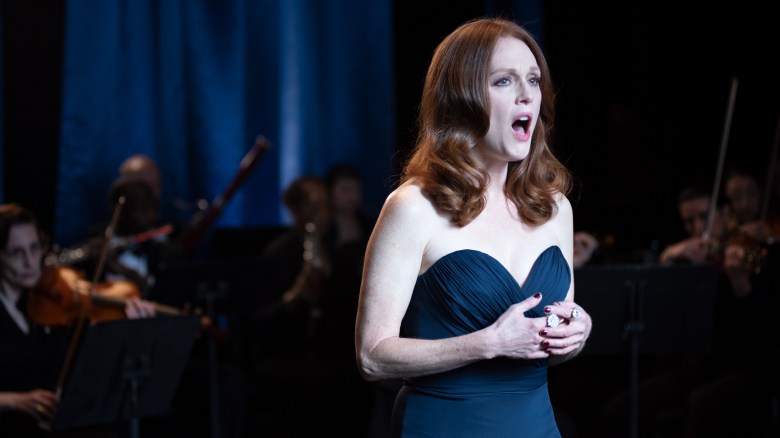 The musical term bel canto refers to a lighter, smoother style of operatic singing, as opposed to the florid coloratura style for which Maria Callas was famous. From the Italian for “beautiful voice,” bel canto strips away ornamental staccato runs and trills in favor of a simpler, more graceful soprano. True to its name, the film “Bel Canto” strikes a delicate balance between forbidden romance and hostage thriller, eschewing clichés to reveal a tender love story that is as much about the human condition as the power of music.

Julianne Moore (with Renée Fleming’s voice) is cast against type as an opera singer named Roxane Coss, who has begrudgingly traveled to an unnamed South American country to give a private concert for the president and a group of elites. Among the crowd is Katsumi Hosokawa (Ken Watanabe), a Japanese businessman whose love of opera (and Ms. Coss) is so fervent that he feigns interest in a development deal to secure the invitation. The tuxedoed guests rub elbows before the show, kvelling about the “opportunity of a lifetime” to hearing the renowned singer in such an intimate setting.

When we first see Moore as Coss, she is framed from a distance, her back turned slightly to the camera. An amusing contrast to the genteel niceties downstairs, she gripes about the bumpy flight and armed soldiers to some poor soul on the other side of the phone. Pacing in her cascading silk ball gown, she instructs sharply: “Italy, England, United States, for the next year at least.” As she descends the stairs to begin her performance, the crowd is stunned into silence. 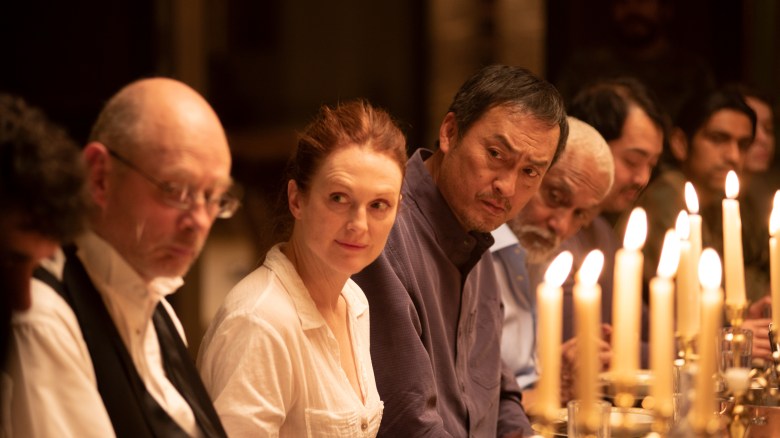 Coss barely gets out a few luscious bars before the event is violently interrupted by a group of armed rebels, who quickly take the group hostage in search of the president. When his emissary explains that the president stayed home at the last minute, they change tactics and keep the hostages anyway. Releasing the women and children, Coss is almost in the clear until one rebel pulls her back by her hair, intuiting that she is too important to let go.

This all occurs within the film’s first ten minutes, a testament to writer-director Paul Weitz’s economical screenplay, which he and co-writer Anthony Weintraub adapted from Ann Patchett’s novel of the same name. Stripping the story down to its bare essentials, the bulk of the film takes place over the course of a few weeks, illustrated by tally marks etched on the wall, as the hostages and the rebels co-habitate in the hijacked mansion. With precision and care, unlikely alliances and romances develop over time, lulling the viewer into a false sense of security — the same one the characters experience. 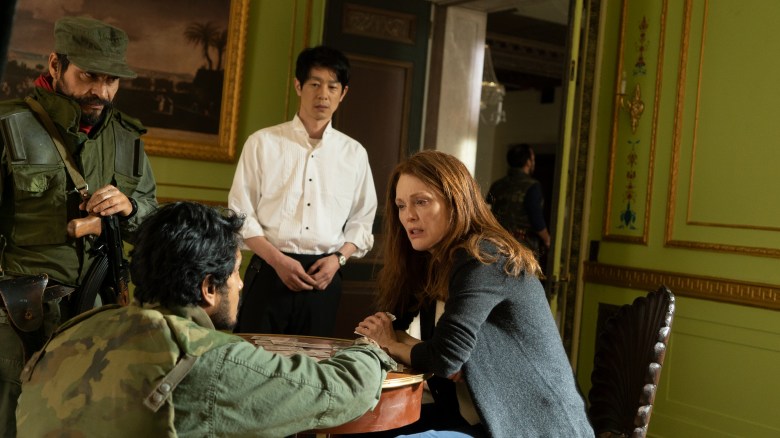 By its dramatic conclusion, “Bel Canto” is no longer just Moore’s movie, though she’s charged with delivering a line so ominous that it’s hard to imagine anyone else pulling it off so casually. In her first conversation with Hosokawa, an innocent flirtation before the deluge, she quips: “It’s opera, so in the end — everybody dies.”

Weitz uses color and lighting to brighten the heavy material; muted sunlight streams through tall door frames, and an empty tiled pool takes on a kind of abandoned beauty. Catherine Riley’s costume design are a study in crumbling elegance — she complements Moore’s famous red locks with as many rich greens as she can find, and the gradual discarding of tuxedo pieces emphasizes the hostages’ transition from the real world to the strange new one in which they suddenly find themselves.

Moore and Watanabe play off each other beautifully, their chaste affair unfolding over chess games and piano lessons. Gen follows them diligently at first, translating every blushing remark, but the two eventually develop their own way of communicating. Like a grand opera, “Bel Canto” weaves many stories into one sweeping epic. Unlike most operas, however, the line between good and evil isn’t always so clear. They say it ain’t over ’til the fat lady sings, but sometimes an ending comes before she even opens her mouth.