The indie mainstay and the "Under the Skin" breakout star in an inventive "mind trip" of a movie about representation, the entertainment industry, and everything in between. 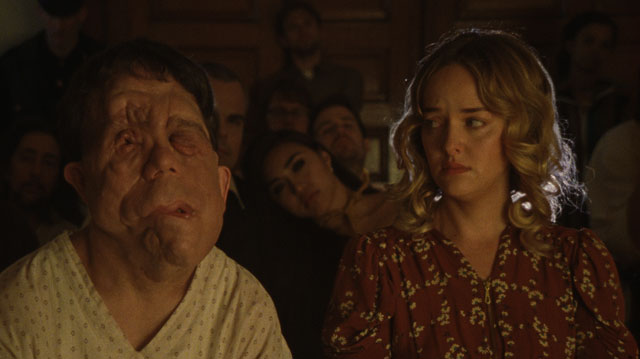 Mabel is a movie star looking for something daring, and when she signs on for an outré art-horror film set to film in a semi-abandoned hospital (fun, right?), it seems as if things are finally about to get markedly different in her professional career. She has no idea. In “Chained for Life,” filmmaker Aaron Schimberg toys with one hot button Hollywood issue after another, from on-screen representation to true diversity, and wraps it all together in a trippy, inventive new spin on smart satire.

The film also stars “Under the Skin” breakout Adam Pearson alongside indie mainstay Jess Weixler (as Mabel), as the gentle-natured Rosenthal, set to star alongside Mabel in an increasingly gonzo new film. Like his character, Pearson has a severe facial deformity, and his looks — and what they mean for both the film and Mabel — serve as a compelling entry point for the film. That’s something very close to Schimberg’s own heart.

In an official director’s statement, Schimberg shared, “As a filmmaker with a facial difference, I have never seen my experience accurately represented on screen. … ‘Chained for Life’ is my response to the way people with disfigurements have been portrayed in films (for instance, in ‘Freaks,’ ‘The Elephant Man,’ ‘Wonder’) throughout cinema’s history. It asks whether the sum of these portrayals has adversely affected the way we are regarded in real life. I consider it a comedy, but if you think it’s a tragedy, I wouldn’t argue with you.”

Earlier this year, IndieWire’s Eric Kohn wrote of the film that “as questions of representation swirl around modern cinema with a greater intensity than ever before, Aaron Schimberg’s fascinating, enigmatic ‘Chained For Life’ provides a remarkable new angle on the discussion. … There’s an extraordinary uncertainty to many scenes that call into question the nature of filmmaking itself, and the degree to which physical exhibition can lead to exploitative extremes, but Schimberg manages to pose more tantalizing questions than firm answers.”

He added, “In other words, a truly mesmerizing mind trip of a movie sure to leave audiences reeling and pondering its mysteries long after the credits roll.”

The film premiered at this year’s BAMcinemaFest and will next screen at Fantastic Fest and BFI London. Take a look at IndieWire’s exclusive trailer below.

This Article is related to: Film and tagged Adam Pearson, Chained for Life, Jess Weixler, Trailers