Moore strikes an alarming tone rooted in the grim realities of the present, but this angry movie spotlights the potential for a new chapter. 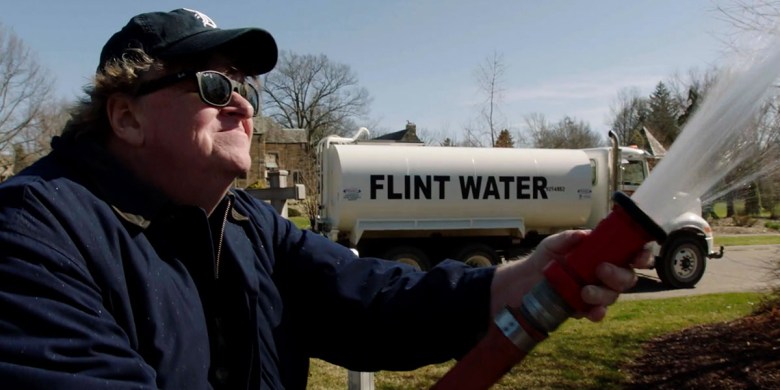 “How the fuck did this happen?” Michael Moore asks in the opening moments of “Fahrenheit 11/9,” after a dramatic recap of the traumatic 2016 presidential election. His exasperation defines the movie’s pressing tone. Over the course of two hours, Moore’s freewheeling cinematic essay attacks that question from countless angles, assaulting the Democratic Party for its compromises even more than the Republicans for standing by their monstrous leader.

Moore isn’t making one movie here — he’s making a whole bunch of them, all colliding at once, in a sprawling quest to save America and highlight Trump’s biggest threats. Among the more incendiary diatribes strewn throughout this angry treatise, Moore compares Trump to Hitler. It’s not a fresh parallel, but rarely drawn in such precise terms, and speaks to Moore’s desire to hack away at his target with relentless intensity in this scattershot portrait of a country under siege.

The movie’s frightening temperament should come as no surprise to anyone following Moore’s work. Whereas the 2016 prophetic concert film “Michael Moore in TrumpLand” envisioned a cartoonish Trump presidency weeks before the election, “Fahrenheit 11/9” strikes an alarming note rooted in the grim realities of the present. And in that hopeless place, he spotlights the potential for a new chapter.

Moore’s witty, caustic voice still comes through, but it takes on a renewed sense of urgency as he veers through the many shortcomings that propelled Trump to power, the continuing dangers he poses, and why those circumstances call for a whole new playbook. Firing off multiple arguments and observations, the movie falls short of the cogent perspectives found in “Bowling for Columbine” and “Fahrenheit 9/11,” the two movies that best illustrate Moore’s capacity to assail a broken system. But the rushed pace engenders a jarring, indignant attitude unlike anything else in his career.

It might not be his best filmmaking, but “Fahrenheit 11/9” is fraught with a critical mindset that syncs with the zeitgeist. It’s a messy movie for messy times.

In many ways, however, Moore’s narrative follows a familiar pattern. He begins by assembling a sprawling montage of archival footage from news reports and other sources, interspersed with his own community engagement, and laces the whole package together with a deadpan voiceover. But this time, he doesn’t have to say much to convey the desperation at hand. Cross-cutting between the Clinton and Trump headquarters on election night as an operatic soundtrack swells, he recounts the unnerving twist that left the bulk of the country with a leader it didn’t want, who didn’t expect to get there. As Trump and his cohorts take the stage for a victory speech, Moore notes, “It looked like a perp walk.”

From these familiar beginnings, the movie goes to some unexpected places. Moore spends a large portion of the movie — perhaps more than this epic overview needs — revisiting his beloved hometown of Flint, Michigan, recalling the water crisis there overseen by Republican governor Rick Snyder. Moore positions Snyder as a proto-Trump character who gets away with his scheme to switch Flint’s water source from Lake Huron to the contaminated Flint River, endangering the largely African American communities throughout the region. Moore talks to locals and captures their mounting frustrations with the local government, arguing that Snyder’s capacity to get away with poisoning the lower classes must have inspired Trump’s confidence that he could get away with so much more. 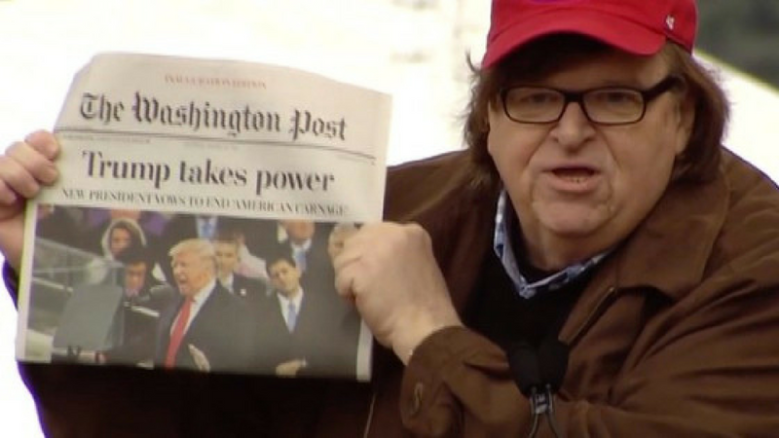 Needless to say, it’s refreshing to see a take on the Trump presidency that wastes little on the most familiar complaints about Trump’s presence in the White House. “Yes, it was Russia and Comey,” Moore admits early on, “but…” In that eclipses lies the rest of the movie: Moore takes on old-school Democrats whose willingness to compromise sealed their fate. He highlights the influential league of sexual harassers who went easy on Trump while grilling Clinton from every angle. He even places some blame on himself.

Yes, Moore recalls, he appeared on Roseanne Barr’s talk show with Trump in the early nineties and tried to play nice. He didn’t take note when Steve Bannon praised Moore’s filmmaking tactics. He even let Jared Kushner host a screening of “Sicko” in New York. Moore can no longer pretend to play the liberal avenger. He’s as much a part of the establishment as the targets he’s faced over the years. Even more shocking: Obama doesn’t fare much better.

And so Moore finds a new class of stars. The movie finds inspiration in a West Virginia teachers strike that pushed back on negligible salaries and inane health insurance policies, noting that their efforts spread to other regions of the country. He showcases radical new Democratic women entering politics and upending the landscape, including Alexandria Ocasio-Cortez and Rashida Tlaib. They don’t say anything in “Fahrenheit 11/9” that hasn’t been singled out in innumerable news reports, but they stand out in this upsetting overview as legitimate beacons of hope.

They’re complimented by the emergence of the Parkland teens, whose ability to mobilize in the wake of a mass shooting and even inspire new voters illustrates a kind of effectiveness that Moore’s own cinema could never replicate. On the occasions that he does indulge in his old tactics — in one sequence, attempting to place Michigan’s governor under citizen’s arrest, and later dousing his home with Flint’s contaminated water — the whole thing registers as quaint.

Still, while the stunts don’t hold the weight they once did, Moore excels at rapid-fire editing and unleashes his boldest arguments with gusto. When the Hitler comparison arrives, it endows the latest efforts to salvage the nation in a bracing historical context. It’s a blunt move: Moore shows black-and-white footage of a Hitler rally and plays audio of Trump speeches underneath it. But then he backs it up: The filmmaker talks to 98-year-old Nuremburg prosecutor Ben Ferencz to validate the comparison, and unearths a laundry list of fascist tendencies to make the case as foolproof as possible. Trump isn’t merely a zany moron with dictatorial aspirations; “Fahrenheit 11/9” proves that he’s following a familiar playbook every step of the way.

It’s a chilling conclusion, and as the movie gathers steam, it doesn’t exactly present a tidy solution. Instead, Moore tips his hat to a new breed of activism and cedes control to their powerful diatribes instead of his own. By the end of “Fahrenheit 11/9,” he’s less invested in explaining how the fuck this happened, and more driven by the energy of those committed to ensuring it doesn’t happen again.

This Article is related to: Film and tagged Fahrenheit 11/9, Michael Moore, Reviews, TIFF