Sebastian Silva's innovative drama is like "The Florida Project" by way of "E.T." 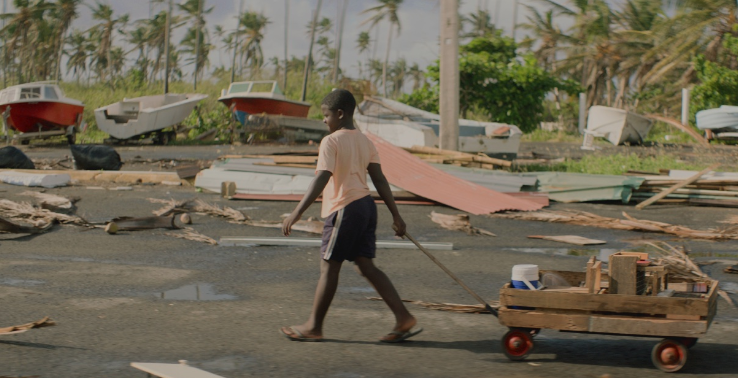 For the first 20-odd minutes, “Fistful of Dirt” is a fascinating neorealist exercise, the story of a young boy set against the backdrop of Hurricane Maria’s aftermath in Puerto Rico in 2017. Then it becomes a mermaid movie, taking an ambitious leap that’s impressive even if it doesn’t always gel. As Sebastian Silva wrestles with several different kinds of movies, the child’s perspective fuses them together, and the movie becomes a startling representation of a society collapsing into chaos. Appropriately shot by “The Florida Project” cinematographer Alexis Zabe, “Fistful of Dirt” captures a modern apocalypse through innocent eyes.

The Chilean writer-director excels at subverting genre expectations, often melding dark comedy and suspense in surprising ways in movies ranging from “Nasty Baby” (an irreverent hipster farce that turns into a creepy thriller in the last act) to “Tyrel” (a race relations comedy until it becomes a creepy suspense story). “Fistful of Dirt” exists in a category of its own: After establishing its “The Florida Project” roots, Silva turns to “E.T.,” and there’s a remarkable confidence to its messy trajectory as the filmmaker roots each twist in a fully realized world.

On the face of it, the production reflects a tradition stretching back to Roberto Rosselini’s “Germany Year Zero,” which was shot in the bombed wreckage of Berlin post-WWII; a more contemporary example would be Sebastian Lelio’s “The Year of the Tiger,” a drama set against the aftermath of Chile’s 2010 earthquake. But “Fistful of Dirt” is particularly fascinating for the way it borrows from discordant storytelling traditions — the gravitas of Hurricane Maria’s destruction, which plunged an island of 3.2 million people into darkness, doesn’t stop Silva from pushing into a realm of allegorical fantasy that wouldn’t seem out of place with Guillermo del Toro, even as it maintains a scrappiness that endows the otherworldly circumstances with an authentic foundation.

At its center is Yeiyei (Julio Gaston), a 12-year-old who spends his days dashing across a shoreline strewn with wreckage, cobbling together supplies for the village where he and his ailing mother have taken refuge after the storm. With their home destroyed, Yeiyei’s family squats with fisherman Alicio (Modesto Lacén), a drunk, angry man who contends with constant berating from his mother (Hilda Juana Pizarro).

Meanwhile, Yeiyei cares for his mother, who requires an oxygen tank at all times as she struggles with a debilitating illness (his father dropped out of the picture long ago). The first act ventures close to documentary territory, as Yeiyei roams the village attempting to do right by his mother while taking in the rhythms of a daily routine that continues despite the disarray. He engages in lively bomba dancing with other kids his age, undulating to drum beats in energizing sequences that recalls the power of jazz in New Orleans following Hurricane Katrina; elsewhere, he watches a local cockfight, and fishes for crabs that dot the beach as the adults urge him to find more.

It’s never enough: As their resources keep dwindling, the future dangles outside the frame as a constant uncertainty. Silva captures the community in such impressive detail that the first few minutes alone provide a bracing contrast to the eagle’s eye perspective on Puerto Rico’s hurricane struggles as they’ve been filtered through American media. The roving camerawork simultaneously captures the wondrous island scenery and the griminess that has overtaken its interior.

Having laid the foundation for a grounded drama, Silva pitches it in the abrupt new direction, as Yeiyei discovers a strange, hairless aquatic being hovering in the water near a crumbled dock. The abrupt introduction of this CGI critter threatens to completely ruin Silva’s unconventional narrative all at once, but the grotesque effects are convincing enough to sustain the sudden shift, as Yeiyei attempts to feed the creature and track its movements. At first, he aims to develop a bond with it, but when the scheming Alicio finds out about it, he naturally decides they need to capture it. That’s when things get ugly.

Silva’s such an involving filmmaker that these scenes remain absorbing even as the conceptual wizardry shows its seams. Clichés crop up and don’t always stick — chief among them, the tired trope of a boy escaping the specter of a parent’s death through his wild imagination. (“A Monster Calls” and “I Kill Giants” are two of the most recent offenders along these lines.) However, “Fistful of Dirt” manages to decontextualize familiar beats through Yeiyei’s source of desperation. The adults are either despondent or furious about their circumstances, leaving Yeiyei to avoid their pessimism with the prospects of a new adventure.

Yet even here, dark themes of greed and desperation overtake the drama, setting the stage for a poetic finale that manages to veer from celebratory to tragic, landing somewhere in between. “Everything’s rotten,” Alicio concludes, and through a series of striking images, Silva suggests that his young protagonist has chosen to embrace that conclusion and make the best of it. Yeiyei’s evolving mindset conveys the essence of survival at the core of this peculiar movie, where the biggest threat to making it through each day is maintaining the commitment to do it at all.

“Fistful of Dirt” premiered at the 2018 Telluride Film Festival. It is currently seeking distribution.

This Article is related to: Film and tagged Fistful of Dirt, Reviews, Sebastián Silva, Telluride