Sebastian Lelio's faithful treatment of his 2013 drama is a terrific platform for a great American actress. 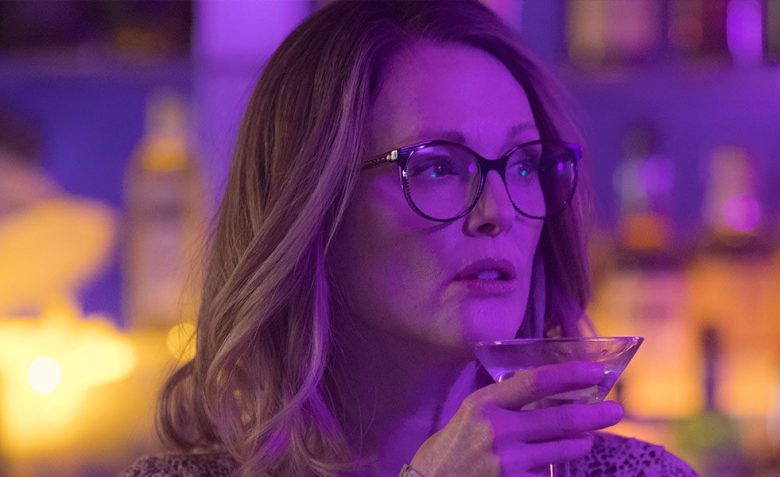 In Sebastian Lelio’s 2013 drama “Gloria,” Chilean actress Paulina Garcia played a 58-year-old divorcee who mostly enjoys her life, blending nightclub outings with a stable job and cozy family time, until a misguided romance disrupts that careful balance. Much of the acclaim surrounding the Spanish-language movie noted the absence of similarly complex, authentic roles for a middle-aged actresses in American cinema. It should come as no surprise that one of them was not only eager to work with Lelio on a future project, but to play Gloria herself. Julianne Moore hasn’t missed out on playing substantial characters, but Lelio’s English-language remake “Gloria Bell” places her at the center of a fascinating cinematic experiment, as the movie delivers such a faithful shot-for-shot version of the original it’s almost as though Moore has been copied and pasted into every scene.

Some may question the reasoning behind the project, which threatens to bury the impact of Garcia’s original performance and implies that most English-language audiences would never take a chance on the original. However, Moore does away with those misgivings from the very first shot, turning “Gloria Bell” into the cinematic equivalent of a new theatrical staging for a beloved play. Unlike Gus Van Sant’s bizarre “Psycho” remix, Lelio boils the essence of his project down to a handful of new faces. At the same time, he wisely stays close to the material, adapting the screenplay he co-wrote with Gonzalo Maza into a fresh platform for Moore to give some of her best work in recent memory.

Once again, the story is bookended with Gloria on the dance floor, enmeshed in a neon glow. This is her natural habitat: Over a decade since her divorce, she’s found a comfortable groove as an independent woman. For a time, the movie simply hovers in a collage of moments from Gloria’s life, underscoring just how much she’s managed the ideal work-life balance. Moore, wearing large-frame glasses and a loose grin, buries herself in Gloria’s layers of personality. As she speeds down the freeway belting out Olivia Newton John’s “ A Little More Love” on the radio — one of the biggest changes to this version is an updated playlist — it’s clear that Gloria lives every moment like the party rages on.

She brings the same ebullience to the time she spends with her hippie daughter (Caren Pistorius) and son (a subdued Michael Cera), who recently became a father; at work, she counsels a troubled friend, and at a yoga class, she tosses herself into a pile of giggling women. Her biggest hurdle is the hairless cat that keeps wandering into her apartment.

In the midst of this stable existence, she meets Arnold (John Turturro, replacing the original’s Sergio Hernandez), a seductive fellow divorcee who catches her eye at the bar. He’s slick, she’s game, and the two find themselves in bed without hesitation.

In short order, they’ve mounted a passionate affair, but warning signs trickle in — Arnold’s still getting worried calls from his ex-wife and needy children, with whom he refuses to discuss Gloria’s existence. “They’ll make fun of me,” he moans. Turturro, always an intriguing character actor, takes especially well to a part hovers in contradictions: He’s ultra-confident until the real world comes rushing in, but Gloria’s so excited by him that she’s willing to let his flaws stand. For a time, anyway.

Like the previous version, “Gloria Bell” builds the bulk of its appeal around a handful of absorbing sequences. In the first, Gloria takes Arnold to dinner with her family, including her ex-husband, where Arnold confronts relatives who are far more functional than his own. The drama builds to an unexpected flashpoint in the relationship, with Lelio’s remarkable use of mise-en-scene frequently capturing Gloria’s interaction with her family as a bemused Arnold looks on, baffled and envious of her ability to maintain a happy life.

The second major turning point comes in the form of a lengthy act set in Las Vegas, where the couple attempts to escape Arnold’s troubles with a vacation that goes very wrong. Lelio and his cinematographer Natasha Braier (“The Neon Demon”) work wonders with the visual possibilities of this environment, capturing Gloria’s descent into a dreamlike fantasy that gradually transforms into a disorienting wake-up call. As with the original, Gloria’s realization that she’s given too much of herself to someone else’s agenda registers as an internal process: She never manages to summarize her problems, but her face tells the whole story.

The final setpiece finds Gloria back home and undertaking a sudden, darkly comical act of revenge to regain control of her life. As with the original, this visually driven trajectory is an involving journey that relys on a fully inhabited performance to complicate the emotions in each scene. Moore brings a feistier interpretation to the character than Garcia’s understated version, with more raised eyebrows and telling half-smiles. But both actresses ground the character in a kind of authenticity that provides the movie with a continuing emotional resonance.

As a general rule, English-language remakes tend to suffer from comparisons to the original. But Lelio is a serious filmmaker whose other recent efforts — the Oscar-winning trans drama “A Fantastic Woman” and the lesbian Jewish romance “Disobedience” — suggests a penchant for deconstructing traditional female archetypes in new ways. In that sense, “Gloria Bell” engages in an explicit dialogue with its predecessor, and collectively they make the case that the character’s experiences transcend any particular national context. The “Gloria” template doesn’t need much updating so long as the actress fits the part (and so long as Laura Branigan’s eponymous song plays over the credits). Moore’s compassionate performance confirms the strength of the original and its beloved heroine’s universal appeal. More than that, “Gloria Bell” proves that the best stories can be told endlessly, so long as they’re told well.

“Gloria Bell” premiered at the 2018 Toronto International Film Festival. A24 will release it next year.