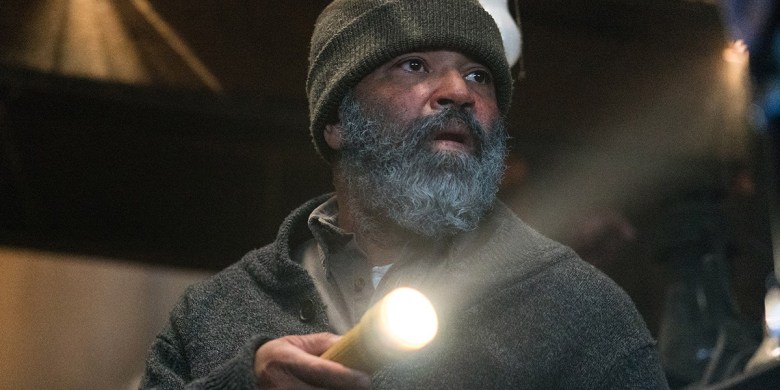 Jeremy Saulnier was a breakout genre sensation with his taut revenge thriller “Blue Ruin,” but “Green Room” solidified his aesthetic with a punks-versus-skinheads survival story that dovetailed from taut survival drama to war movie. With “Hold the Dark,” he continues that fascinating hodgepodge approach, transforming the eerie backdrop of the Alaskan wilderness into an expansive playground for various genre tropes.

By merging a riveting outdoor survival yarn worthy of Jack London with bloody shootouts and supernatural thrills, Saulnier solidifies an aesthetic steeped in the delicate art of merging many kinds of movies into a formidable whole. It’s not always satisfying — this time, the approach yields a confusing and sometimes convoluted narrative — but Saulnier and screenwriter Macon Blair maintain their gripping atmosphere with a rapid-fire pace, and the relentless experience adheres to its own homegrown beats.

The movie begins with a haunting scenario that would sound absurd if Saulnier didn’t play it dead serious: Medora Stone (Riley Keough) writes to wolf expert Russell Core (Jeffrey Wright) to report that her son was dragged off by a pack of the hungry beasts and why she wants revenge. Living in a remote settlement in the northern part of the state, Medora already sounds as though she’s lost it by the time she reaches out. But Russell, whose estranged daughter lives in Anchorage, figures he’ll take the gig as an excuse to visit her in Anchorage.

But he doesn’t take into account the extent to which this distant town exists apart from the more settled regions of the state. (“That city,” Medora tells Russell, “is not Alaska.”) He soon finds himself holed up in her eerie residence, less invested in tracking down the hungry predators than in helping her work through the grieving process, realizing that her husband’s stationed in Iraq and she’s been left to process the loss on her own.

The movie’s first chapter has the haunting elegance of an old-school ghost story, with Russell spending the night at Medora’s home as he witnesses her sleepwalking and engaged in inexplicable late-night behavior. From there, “Hold the Dark” ventures in a series of unexpected directions: Russell heads into the wilderness to witness strange behaviors from the wolves, only to return to the village in the wake of a new tragedy and Medora nowhere to be found. And just like that, Saulnier abandons Alaska for a detour to the Middle East, where the missing woman’s husband Vernon (Alexander Skarsgard, muted and creepy) engages in a harrowing showdown that results in a free ticket home. This tense, disturbing sequence establishes Vernon as a silent killer with his own moral compass and no shortage of psychological instability. The ensuing events take cues from that mindset.

Back in Alaska, the movie unfurls in new directions, with a series of grisly murders that catch the attention of no-nonsense local police chief Donald Marium (James Badge Dale). This leads to a zany, Peckinpah-inspired shootout that continues for a large stretch of the movie’s middle section as it transforms into something else altogether. At the center of all these jarring twists, Russell is thrust into a labyrinthine mystery involving local folklore and demonic possession with no tangible solution. At least, that’s one potential explanation; the other involves the turmoil of post-traumatic stress and alienation leading people on the outskirts of civilization to act out in horrible ways. Taking their cues from William Giraldi’s novel, Saulnier leaves both possibilities on the table and leaves viewers to sort it out.

More abstract than his previous efforts, “Hold the Dark” evades the payoff of easy explanations, but the filmmaker crafts such an immersive blend of shocking, violent developments and lyrical imagery that the specifics rarely matter  — at least not as much as the frantic emotional instability of the vapid snowy landscape. With a howling wind dominating the soundtrack, and the blinding white mountains lurking in the corners of almost every frame, “Hold the Dark” develops a post-apocalyptic aura unique to the desolation of America’s last frontier.

And at its core, it digs into the plight of a couple who have given up on humanity for good. Finding each other in the woods after leaving a pile of bodies in their wake, Donald and Medora both experience a descent into insanity that speaks to the chaos of the natural world overtaking them. This nightmarish, mythological process unfolds with evocative imagery that takes on a kind of primal energy. It’s not always a credible journey — poke holes all you want — but the filmmaker’s slow-burn approach turns up the suspense at every turn. While the police struggle to understand the couple’s motives as they vanish into the wilderness, “Hold the Dark” makes it clear that no single explanation can solve the problem at hand. They’ve merged with a chaotic process beyond human comprehension.

As a result, Russell becomes the key to stabilizing the movie’s unwieldy trajectory. As with his ever-shifting role on “Westworld,” Wright excels at scowling and grimacing as he peers out at a world so overloaded with bizarre developments that he hovers in a perpetual state of astonishment; he’s a natural access point for audiences. Wielding a variety of weapons while undertaking both human and animal foes, he becomes the story’s makeshift hero, struggling to piece together a mythological world through the practical tools at his disposal. As “Hold the Dark” sputters to an unsatisfying finale, Wright’s character promises to explain everything that came before. The movie’s great punchline is that he’ll never be able to sort it out all out — and we’re right there with him, reeling from a disquieting saga that has no patience for anyone in need easy answers, but keen on leaving us gasping for breath.

“Hold the Dark” premiered at the 2018 Toronto International Film Festival. It premieres on Netflix on September 28, 2018.

This Article is related to: Film and tagged Hold The Dark, Jeremy Saulnier, Reviews, TIFF