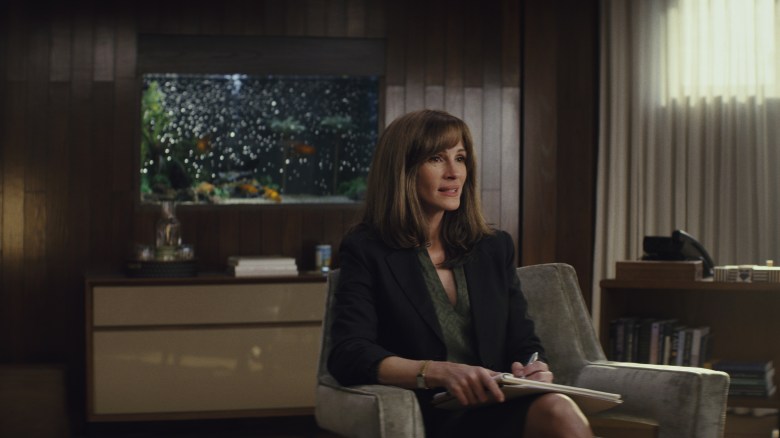 From its opening shot onward, Sam Esmail’s “Homecoming” is designed to throw you off-kilter. What appears to be a palm tree in the night sky is quickly revealed to be a decoration inside a fish tank. That fish tank is within an office, and that office is within a compound. But where’s the compound, and what are they doing in there?  Who’s watching and why? Subversion runs rampant throughout Esmail’s joyfully paranoid first four episodes, as the “Mr. Robot” creator builds a universe where keeping your head on a swivel is as instrumental as acknowledging what’s right in front of your face. Forged from inventive long takes and killer audio cues, the upcoming Amazon original series feels like Alfred Hitchcock has made a new mystery, and it’s a deliciously good time.

Based on the podcast of the same name (and written for the screen by creators Eli Horowitz and Micah Bloomberg), the half-hour conspiracy thriller bounces between two timelines: In one, Heidi (Juila Roberts) is a case worker — really a therapist, of sorts — for a program called Homecoming. Run by the Geist group, it’s meant to help soldiers adjust back to civilian life after extended periods in combat. Heidi interviews the men once they arrive back, while other employees lead them in practice interviews (to help them get a job) and provide calming activities (like board games) to help pass the time.

But in the future timeline, Heidi is waiting tables at Fat Morgan’s, a diner on the side of a bay with a giant walrus wrapped around its sign. She’s not on the phone all the time with her controlling boss, Colin (Bobby Cannavale), nor is she donning professional attire for her formal sessions in a giant office. She’s not affiliated with Homecoming at all, and she’s not to eager to talk about it when Thomas Carrasco (Shea Whigham), an agent from the Department of Defense, shows up asking questions. 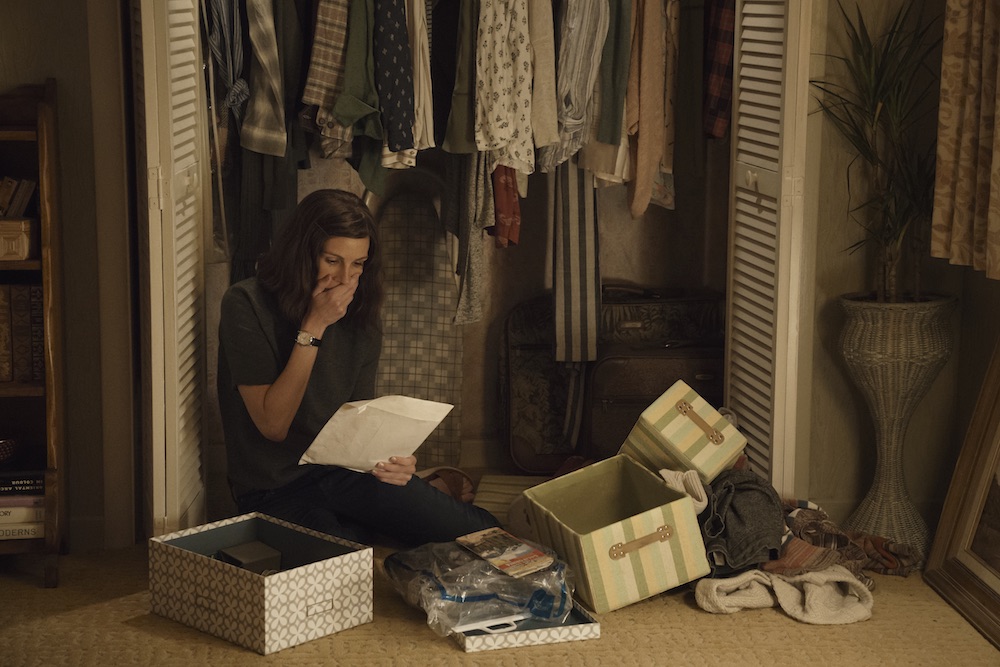 The obvious question is, “What happened?” But Esmail delights not only in teasing out that answer but evoking a rising level of paranoia along the way. The director of all 10 episodes uses a vertical framing — not unlike an iPhone video, which is how some Amazon Prime subscribes might watch this — to designate the present from the past, filling each tall rectangle with daunting images of endless cubicles, imposing figures, or simply more tall rectangles. (There’s a shot/reverse-shot in Episode 4, “Redwood, where three beautifully lit black pillars illustrate the power of what they’re holding up, while one wide pillar casts a shadow on a man who’s trying to fight his way out of the dark.) Aerial shots look down on vans working their way through never-ending roads or a stairway straight out of an M.C. Escher print. Slow zooms on worried faces ramp up the tension even when they don’t lead to a big reveal.

And then there’s the score. While the podcast built its mystery through the brilliant inflections of its amazing voice cast, plus the clicks and buzzes of phone lines and voice recordings, the series comes alive through its playful audio cues. Music supervisor Maggie Phillips uses original work and select ’70s film scores to invoke the era and define the series’ distinct personality. Eerie notes float through a casual conversation to alert the audience that, hey, something might be wrong here. A rush of sound, as if you’re traveling through a wind tunnel at warp speed, ushers in transitions between time periods. There’s an ominous hum running through a mundane office space, as if the fluorescent lights are talking to you; telling you how this seemingly ordinary setting is too ordinary to be trusted. 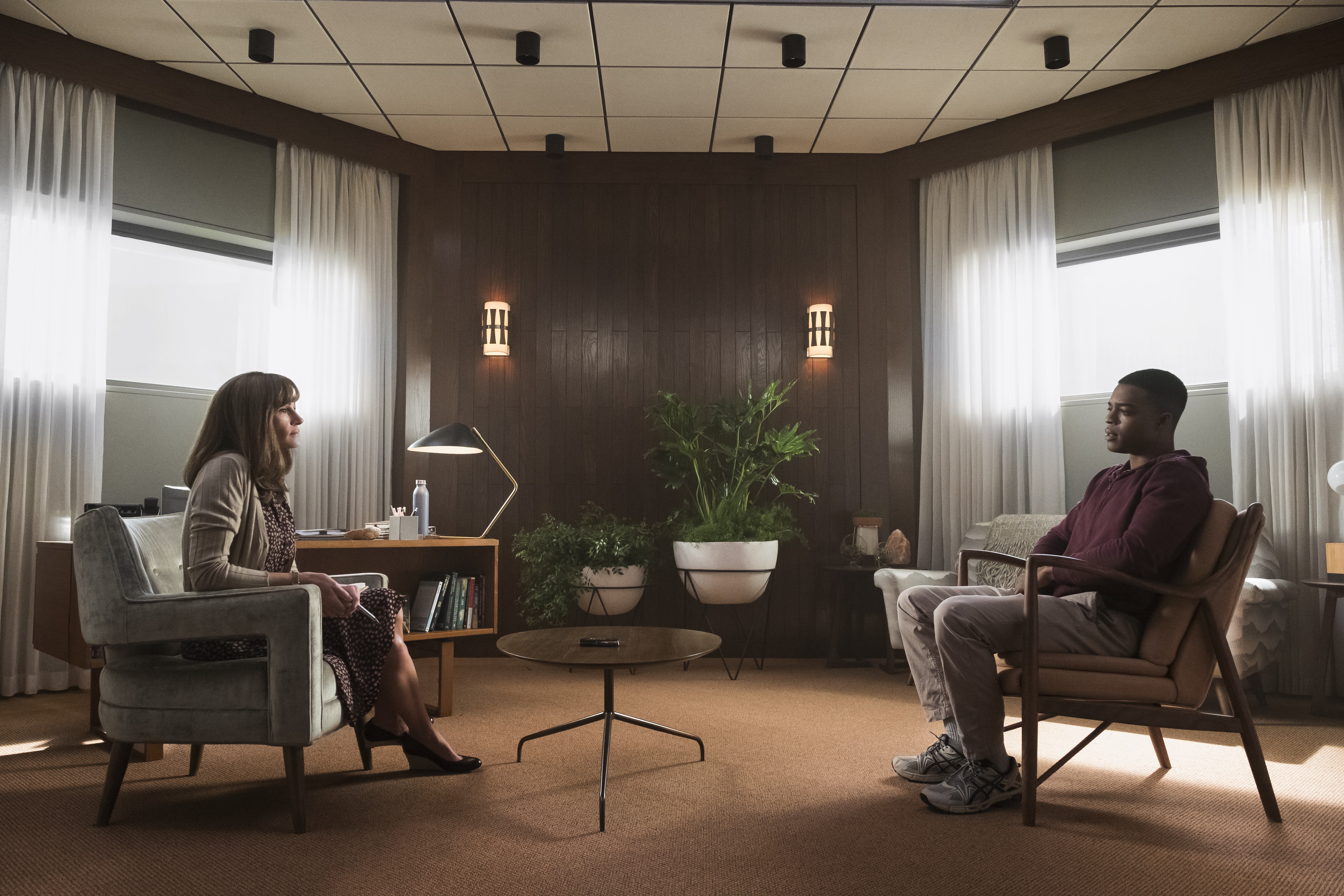 Pair all of this glorious audio with the furtive glances of characters on edge, and “Homecoming” becomes gleefully angsty. The half-hour episodes fly by, pulsing with jittery excitement that borders on sensory overload. For short bursts early on, it can feel like an emotional connection is needed to bridge the gap between the series’ ethereal sensations and corporeal attachment. Yet just as the missing link proves nagging, Roberts steps in with her movie star might to fill the void.

Despite playing a character in two timelines, four years apart, Roberts expertly deconstructs both versions of Heidi along parallel planes. At Homecoming, Heidi slowly sheds her disconnected professional demeanor as she learns more and more about the program. In the present day, she’s ditching the defenses erected to protect her from the past. Roberts has always been effective with her shields up, tossing attitude with delicious verve at anyone in her way (think “Erin Brockovich” and “Pretty Woman”), but she wrenches our hearts when she’s vulnerable. Be it the “I’m just a girl” scene in “Notting Hill” or when she’s trying to protect Little Charles from a crushing secret in “August: Osage County,” Roberts wields a unique power with her ability to draw viewers in, again and again.

She pulls it out just in time here, and given there are still six more episodes to go, Roberts helps set up “Homecoming” as a creepy, fun thriller and a gripping, human drama. Don’t be afraid to look closely.

This Article is related to: Television and tagged Homecoming, TIFF, TV Reviews