Carrey's comments arrived just hours after Donald Trump slammed Nike for the decision to make Kaepernick the center of a new ad campaign. Jim Carrey is returning to television this week as the star of Showtime’s half-hour series “Kidding,” but that doesn’t mean he’ll be giving up his role as a painter any time soon. The comedian reacted to Nike’s decision to make Colin Kaepernick the face of its new “Just Do It” advertising campaign by publishing a portrait of the athlete kneeling during the national anthem and celebrating Nike for its controversial decision.

“Thank you, Nike, for just doing it,” Carrey wrote in the caption accompanying the painting. The image contextualizes Kaepernick’s kneeling to other historic moments featuring black athletes, including Jesse Owens’ appearance at the 1936 Olympics in Germany and the U.S. Olympic athletes who raised their fists at the 1968 Mexico City games.

Carrey’s painting arrived just hours after Donald Trump, a usual subject of ridicule in Carrey’s artwork, took to Twitter to slam Nike for its decision. “Nike is getting absolutely killed with anger and boycotts,” Trump noted. “I wonder if they had any idea that it would be this way?”

Kaepernick is well known for peacefully protesting violence against blacks in America by kneeling during the national anthem before NFL football games. His act inspired others to take part in the protest, causing a nationwide debate over whether or not kneeling during the National Anthem is unpatriotic or not. While Nike’s decision to feature Kaepernick in its new ad campaign has garnered praise, it’s also inspired detractors to boycott the brand.

Carrey can be seen in “Kidding” beginning Sunday, September 9 on Showtime. 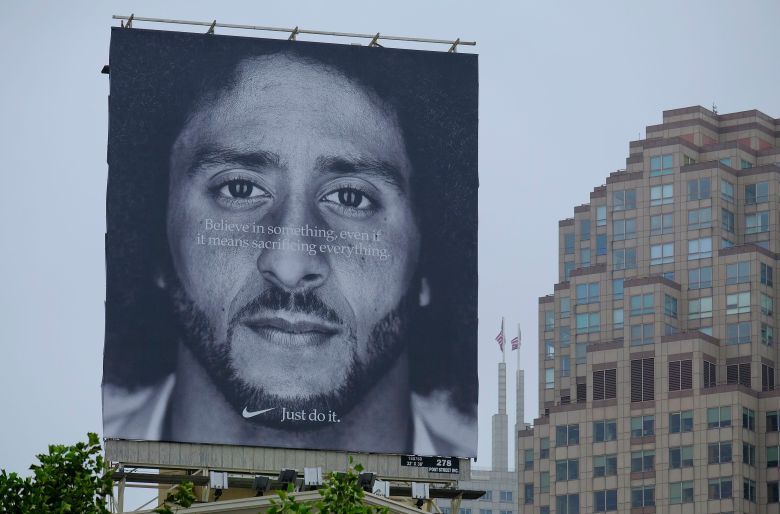 This Article is related to: Film and tagged Colin Kaepernick, Jim Carrey, Nike