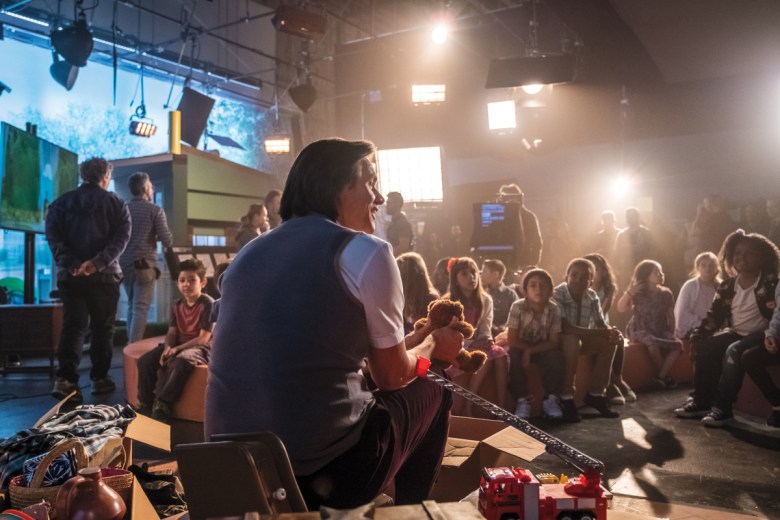 For a show that can be described as a dark, screwy take on the legacy of Fred Rogers, “Kidding” makes a deliberate effort to escape the legacy of the man with infinite cardigans and good cheer.

“I certainly didn’t want Jim to approach the role thinking of Mr. Rogers like the original man,” director Michel Gondry said. “I really didn’t want that. It’s not the story of Mr. Rogers. It’s much more. I mean, I don’t know much about Mr. Rogers, but we tried to get away as much as possible.”

The inspiration is undeniable. Jim Carrey plays Jeff Piccirillo, aka “Mr. Pickles,” the host of a wildly popular children’s show who’s also dealing with the disintegration of his real life behind the scenes, a concept concocted by creator/showrunner David Holstein.

When he first began writing “Kidding” as a spec script, Holstein had just spent seven years writing for the Showtime comedy “Weeds,” which he thought was part of a larger conversation born of shows like “The Sopranos,” “Mad Men,” and more. 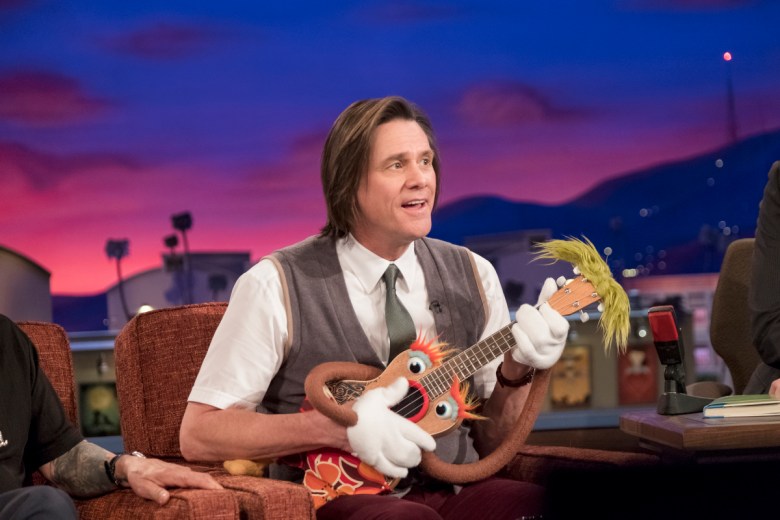 “What was pushing me was the desire to find the next chapter in that story, and for me it was finding someone who didn’t want to break bad, but wanted to stay good, you know? I didn’t want to write a premium cable character who wanted to fuck hookers, do drugs, and kill people. I wanted to flip it and figure out,” he said. “Take someone who’s really really good, like a Mr. Rogers kind of character, and make the world around them that dark, edgy, premium cable kind of space, and watch them fight against it. Watch them struggle to remain good in sea of dark people.”

The direct connection to Mr. Rogers, Holstein said, came pretty quickly, but not necessarily because Mr. Rogers was an obviously sunny persona.

“I thought Mister Rogers was a really scary person because he never got angry,” he said. “So to me it was, how can someone over 30 years never get angry? And what would happen the first time they did? And to me that was where I wanted to start with this character. Let’s take someone who is legitimately kind, and good, and optimistic, and wants the world to be this beautiful place, doesn’t curse, doesn’t lie. What would be his breaking point?”

Mr. Pickles’ breaking point is the death of his son, which triggers a whole series of spiraling emotions not just for Jeff, but for his entire family. “And then what sort of came out of it when we began to expand it into a series was, times are kind of dark, truth is relative, and people just go on TV and they lie, and they’re mean, and they’re bullies. To me, it brought back this need, this demand for someone like Mr. Rogers, and to tell that story now was exciting,” Holstein said.

While the inspiration was clear, co-star Catherine Keener, who plays a puppeteer working on the Mr. Pickles show, said to IndieWire that comparisons to Mr. Rogers “never” came to mind. “I don’t know why. I never thought of it,” she said. “I don’t think we ever talked about it.” 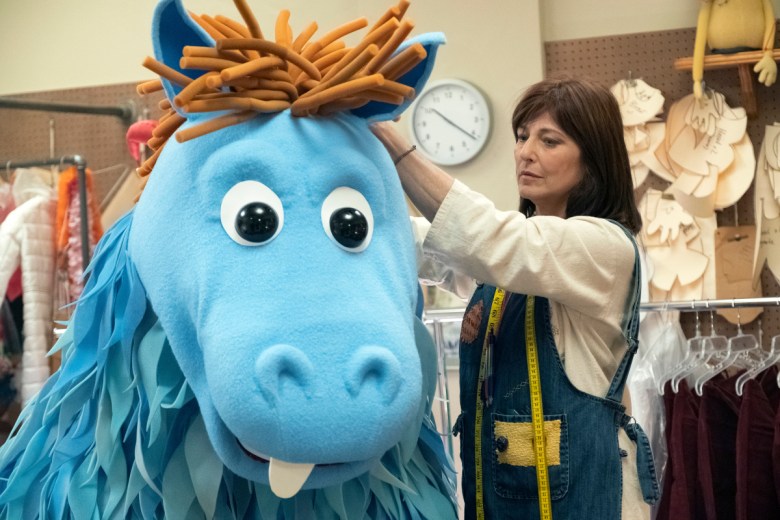 This might in part be due to the influence of Showtime as a network, which Holstein said would often push for the edgiest possible version of this character and story. But for Gondry, the key to keeping Mr. Pickles separate from Mr. Rogers was simple: “Just thinking of [Carrey] took me away from Mr. Rogers,” he said.

It helps that Holstein wrote the role specifically for Carrey, without ever believing there was a real chance Carrey would agree to do it. “I was just this writer who decided to wake up one day and say, ‘I’m going to bring Jim Carrey back to television,’ and my agents were like, ‘You’re crazy.’ And they were totally right,” he said.

“But I had this weird obsession with ‘The Truman Show,’ and ‘Eternal Sunshine of the Spotless Mind,’ and I really wanted to create a part with Jim in mind. And what’s funny is that what then happens is reality sets in and everyone says, ‘Well, who can really play this role?’ Then you start to go down that road, and the beautiful irony of this project for me is, we went down that road. And nobody really fit the bill.”

That is, Holstein said, until “Jim read it, and then Jim wanted to do it. I mean it was the coolest moment of my life when I got pulled out of a room by Jim to say, ‘This is the script I’ve been waiting to read for years.’ Your heart just hits the floor and it bounces back up. I did a crazy thing, and it turned out better than I could have hoped for.”

“He evolves,” Gondry said. “So there is this picture on the show that is constant, but in his private life, he evolves. Little by little he… cracks open and you see the sadness and madness, but what would define him? I mean, it’s a sort of chaos due to his position of wisdom, his moral, working for young children, and his real life where this wisdom doesn’t apply at all. So that’s how I define him.” 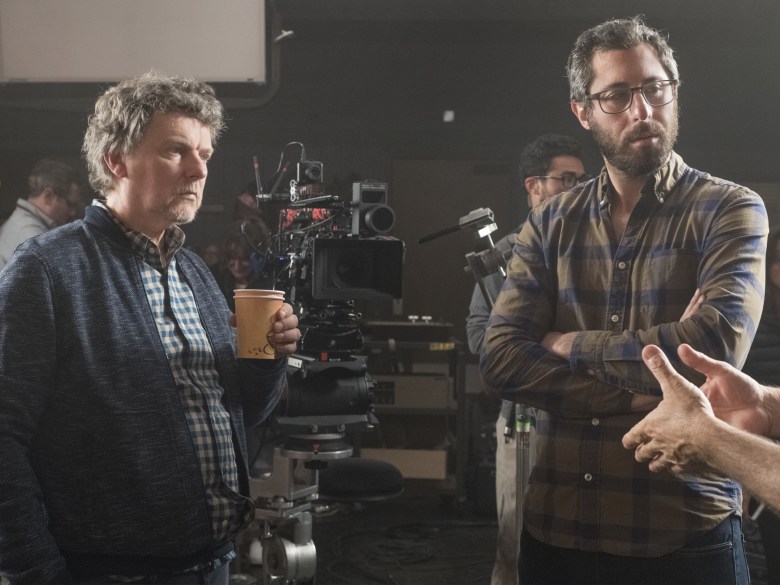 Michel Gondry and David Holstein on the set of “Kidding.”

There’s another factor in ensuring that Mr. Pickles avoids feeling too similar to Mr. Rogers: Holstein poached Joey Mazzarino, who was a writer and puppeteer for “Sesame Street” for years, to help create the world of “Mr. Pickles’ Puppet Time.”

“And so he came in every day and built us a show within a show, that was a legit children’s show, that had a mythology, and had a language to it, and had rules, and things that you would have to keep us from taking the easy route of making it a satire or parody,” he said.

That might, ultimately, be the key. “The easy version of this show was making Mr. Rogers become Bad Santa. That’s an easy show to write, and we did not want to do that. We wanted Mr. Rogers to fight to stay Mr. Rogers — because that was the more emotional ask of the audience.”

“Kidding” airs Sundays at 10 p.m. ET on Showtime. For more on the opening episodes of “Kidding,” make sure to listen to this week’s Very Good TV Podcast with IndieWire TV Editor Liz Shannon Miller and TV Critic Ben Travers.

Don’t forget to subscribe to Very Good TV Podcast via Soundcloud or iTunes. Make sure to follow IndieWire on Twitter and Facebook for all your TV news. Plus, check out IndieWire’s other podcasts: Screen Talk with Eric Kohn and Anne Thompson, the Filmmaker Toolkit Podcast with Chris O’Falt, as well as Michael Schneider’s podcast, Turn It On, which spotlights the most important TV each week.

This Article is related to: Television and tagged Catherine Keener, Kidding, Michel Gondry