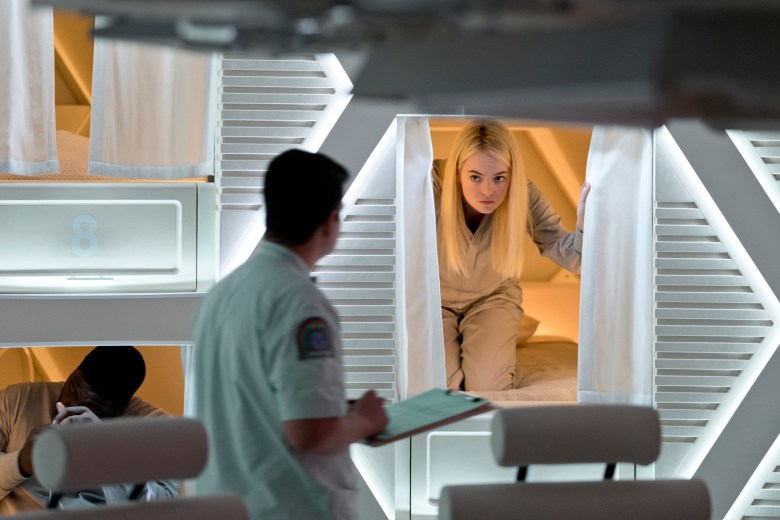 The Netflix series “Maniac” may bring its characters into some truly strange realms, but even the baseline world where mentally disturbed Annie (Emma Stone) and Owen (Jonah Hill) reside is one completely outside our current society, especially when it comes to pop culture and technology. All computers use acid-green interfaces, people can get free services by signing up for in-person Ad Buddy commercials, and there’s a Statue of Extra Liberty hanging out in the New York harbor.

Director Cary Fukunaga said the idea of setting the show in a new plane of existence grew with its development. “As [creator Patrick Somerville] and I started working on it, I think we both thought that the real world should also be a heightened reality, and I don’t think we knew exactly why we were doing that, initially,” he said. “It just felt like an instinct.”

Later, they realized that the question of “what is normal?” was something to be manipulated. “Because there is nothing normal. Nothing should feel familiar,” Fukunaga said. “The unfamiliar part of it is what you know existed, so it really does feel like … it’s always feeling foreign somehow.” 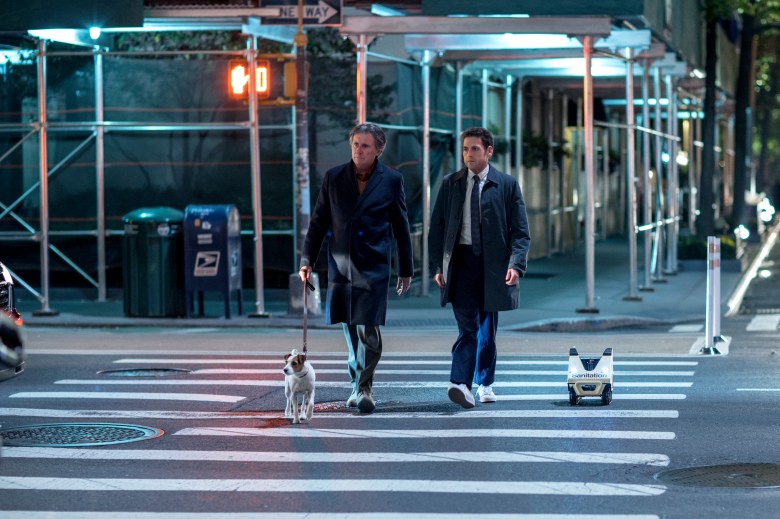 Star Justin Theroux noted that while creating a future world may suggest unfettered freedom, it demands its own logic. “It’s sort of this slippery slope,” he said. “Okay, let’s have a cell phone. Well, what does the cell phone look like? Okay, let’s make it a piece of glass. Okay, well wouldn’t it not be a piece of glass, wouldn’t it be on your eyeball? Eventually, it can sort of cannibalize itself … It doesn’t have to be ‘Minority Report.'”

The “Maniac” aesthetic also stems from story elements like the gig economy-esque services that color the show, such as Ad Buddy, in which people follow you to read advertisements aloud. “My take on ‘Maniac’s’ reality is that it’s our opportunity to portray a different history of technology,” said Somerville. “So, the idea behind the Ad Buddy was just, how do we get this feeling into the show? The feeling of being inundated, but do it in our way, do it in a different way.”

As he added, “There’s something world-building about those moments, but when you have an actor to build them, it’s fun and weird. And so, I think the idea of the Ad Buddy was just like, how do we create that sense of being inundated by, not just advertising but by media, by explanations of who you’re supposed to be and what normalcy is, but do it in a way that was just completely unique.”

One very specific way in which “Maniac” feels unique in 2018 is the characters’ unabashed love of cigarettes. Annie casually smokes throughout the series (something Stone said she loved getting to play), and Dr. Azumi Fujita (Sonoya Mizuno) is constantly filling ashtrays inside the NPB lab.

“The baseline reality is not quite clear when we are or what it is,” Somerville said. “To me, it’s not the future; it’s another version of where we could be right now. There’s plenty of ’70s, ’80s, and ’90s things that [happened] as normal in that world, that aren’t happening for us anymore. We just like the idea of making our world a place where people still smoked where they worked. And then once that happened, then there was smoking constantly… It wasn’t exactly intentional, but I think it grew out of that questioning of normalcy that’s in the show.”

Somerville also noted that the term “McMurphy,” which NBP scientists use to refer to a catatonic patient, is a direct reference to the 1962 Ken Kesey novel/1975 Jack Nicholson film “One Flew Over the Cuckoo’s Nest.” Therefore, those properties exist within the pop culture of the “Maniac” universe; so does the the board game Balderdash, which debuted in 1984. Both fit under one of Somerville’s primary guidelines: “The rule that we ended up landing on is that stuff that came into the world after 1990 started feeling not okay.”

Little by little, the “Maniac” rule book began to take on a life of its own. “This thing happened with the art department, with our production designer, with props, where everybody was sort of slowly learning the aesthetic of the show … me included, Cary included. It kind of came down to a thing where it just was a binary. It would be like ‘Maniac’ no, ‘Maniac’ yes. This works here, this doesn’t work here.” 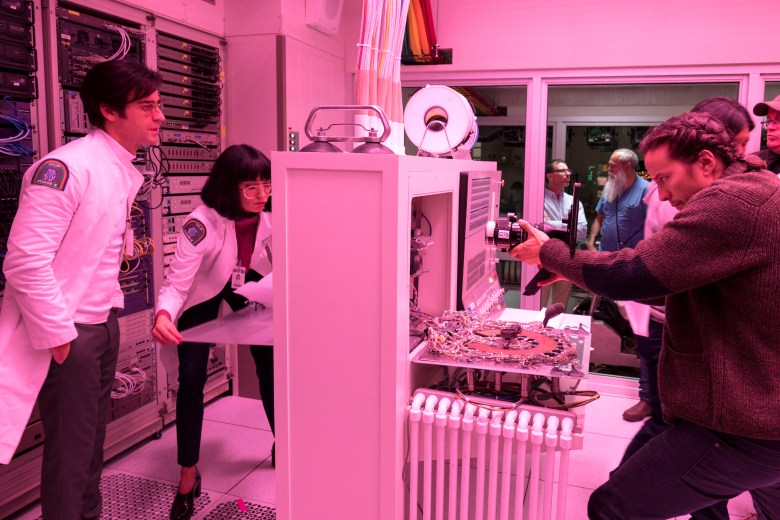 Cary Fukunaga on the set of “Maniac”

Not everything made the cut. “One of my favorite ones that didn’t make it in was a Therapeasy booth, which was like a basically coin-operated therapy session, where you buy like credits in multiple sessions,” Fukunaga said. “It was just going to be like a mezzanine of subway stations.”

“I think that is a good idea,” Stone said. “Where you spend like five minutes just asking a question and talking to someone? That’s really smart.”

Somerville said credit for the world building came down to collaboration. “I think some was on the page, and then a lot more came out of the production design, and a lot more came out of ideas [Fukunaga] was thinking at 5:30 in the morning before we were getting picked up to go to set. The whole production was always alive … The details in the show, I feel like everybody that worked on that show got a chance to throw some detail in somewhere. You know?”

Somerville noted that production designer Alex DiGerlando “really had an intuition, a deep intuition about those rules. And then from there, location and costume and hair and makeup, everyone started playing by those rules, even though they weren’t written down. It was deeply organic.”

“Maniac” is streaming now on Netflix.

This Article is related to: Television and tagged Cary Fukunaga, Justin Theroux, Maniac