Ambitious and messy, obtuse and on-the-nose, Cary Joji Fukunaga directs a visual spectacular handcuffed by its own big ideas. 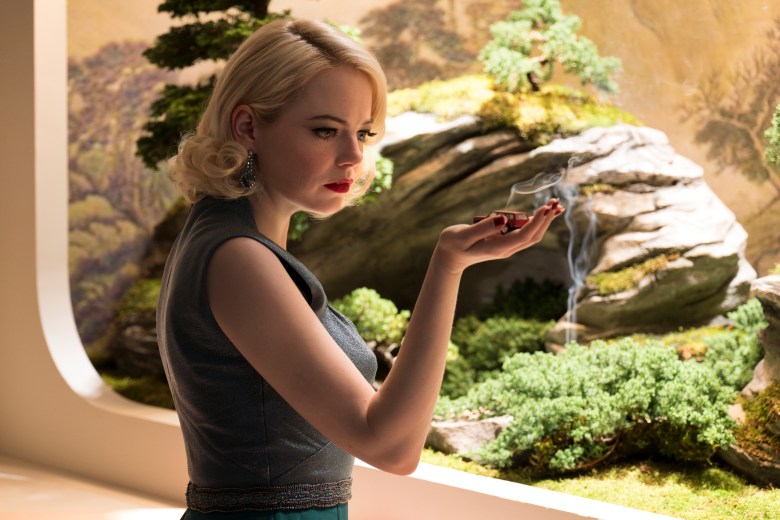 “Maniac” is a peculiar original series in almost every way. Intimate to the point of feeling very small, yet stuffed with more grand existential ideas than it can ultimately coalesce, the new 10-part Netflix limited series is filled with some really weird shit. Specifically, there’s a chess-playing purple Koala bear and pills capable of sending your mind into Middle Earth. Then, looking at the series as a whole, one episode is shaped like an ’80s sitcom about a married couple getting their groove back, and the next is a spy thriller with a violent long take made to rival the body count in “Oldboy.”

Written largely by Patrick Somerville and helmed entirely by Cary Joji Fukunaga, the duo’s kaleidoscopic vision comes to life in fits and starts; the many tonal shifts aren’t always well-finessed, but the star-studded, wildly ambitious miniseries serves up enough brilliant flourishes to leave a mark.

Meet Owen Milgrim (Jonah Hill). Owen is an office drone put on permanent leave due to an unknown series of incidents that may or may not be related to his condition. Owen sees people who aren’t there. He sees things that don’t happen. He’s suffering from schizophrenia, and being the fifth son in an uber-wealthy Manhattan family has forced him into the shadows. They don’t want to talk about his problems, or even fully acknowledge he has them, for fear of tarnishing the family name. Embarrassed and ashamed, Owen just tries to do what he can to keep his family happy, even it makes him miserable. 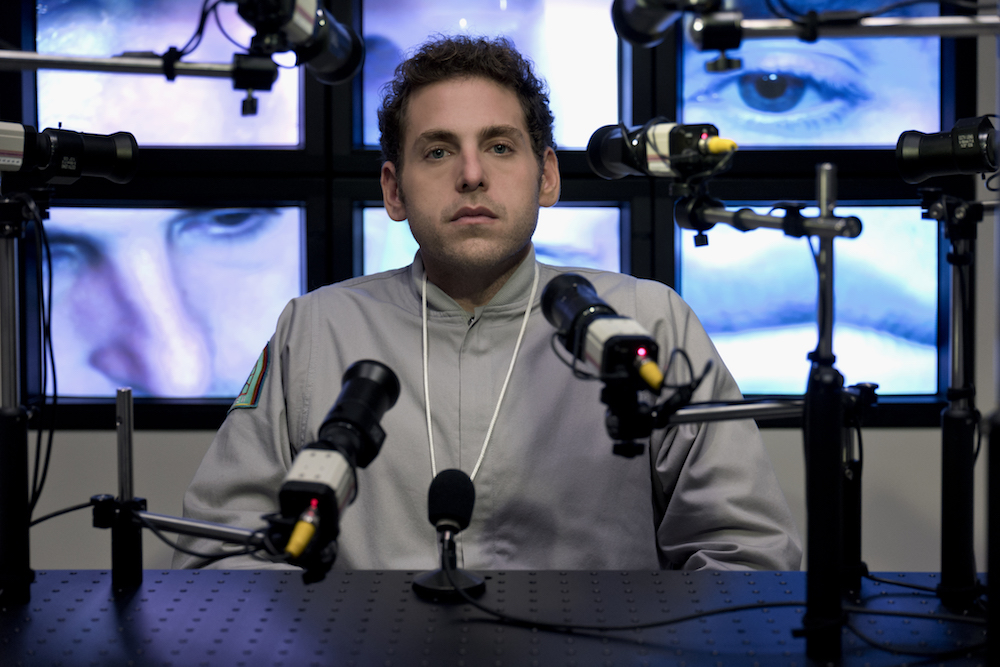 Floating around elsewhere in the five boroughs is Annie Landsberg (Emma Stone), a chainsmoker and a minor con artist who’s looking to score more “A” pills as much as she wishes she could kick the habit. The mysterious A-shaped drug sends her into a deep sleep for days, but little else is known about it, and what really matters is how Annie reacts to her craving for the escape. Short on direct connections to the pill (and following troubling encounters with her father and roommates), Annie works her way into a drug trial simply so she can get one more pill.

Of course, she’s in far deeper than she bargained for. Created by a mad scientist of sorts and run by some very fallible doctors, the experiment starts by giving its subjects the A-pill before moving onto the B and C pills. Combined with the machinations of a super-computer called GRTA, each drug is designed for a seemingly simple yet vastly complex purpose: to eradicate sadness, mental illness, or any flaw in the human mind. Easier said than done applies to both the patients’ and doctors’ ensuing struggles.

The plot is simple: After the above setup, viewers watch as Owen and Annie go through the trial, taking each pill and reporting their experiences. It’s easy enough to track the narrative through-line, but the intricacies of the story, however, are absolutely nuts. You’ll find no spoilers here, but a quick glimpse at the trailer or the many production stills released by Netflix should show you what kind of imaginary “reflections” Owen and Annie experience, as “Maniac” changes from an examination of mental illness through science-fiction into a genre-blending, reality-hopping, identity-shifting jubilee.

Within these alternate realities, “Maniac” starts to experiment with tone. The aforementioned sitcom episode spins off into an action sequence and dark drama, barely prepping the audience for such drastic changes. The only warning could be an eerie sound cue or a mysteriously significant truck driving by, but suddenly the temperament is too somber to befit the joke here or the sight gag over there. One could argue these mood swings are purposefully disorienting; that even the seemingly off-key comic timing is meant to be an octave (or six) off the mark to better illustrate the characters’ perspectives. Perhaps the audience is meant to feel as lost or confused as Annie and Owen, but a) there’s nothing particularly insightful there, and b) the heavy-handed exposition meant to keep everyone up to speed would have needed to be jettisoned. 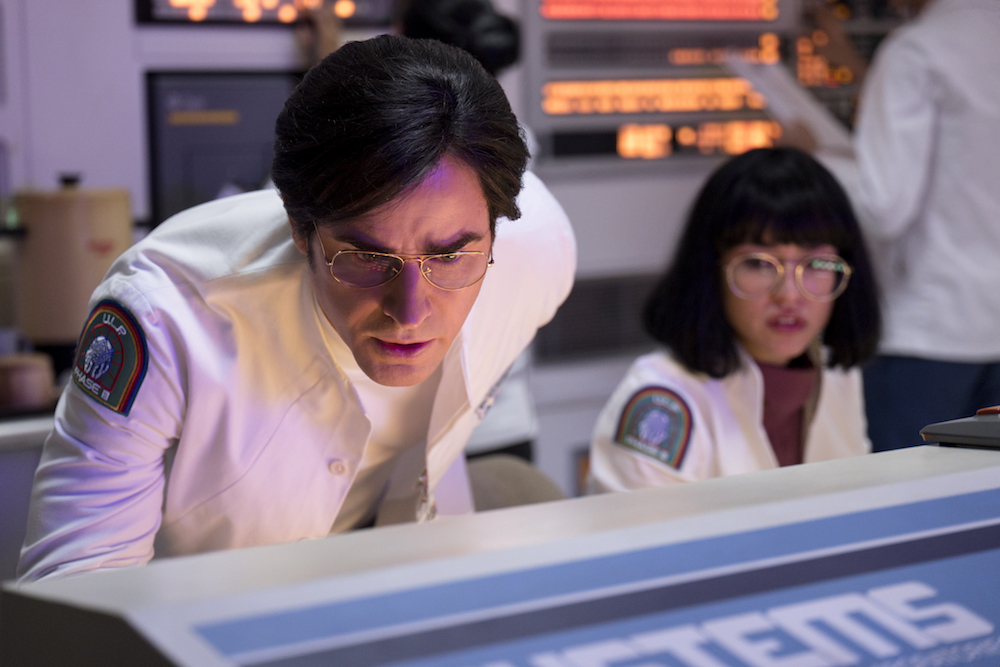 Only some of the cast can keep up with all these adjustments. Emma Stone is saddled with the tallest challenges; as the co-lead and less complicated character, she needs to command every moment of Annie’s journey to keep audiences hooked, and the Oscar-winner does just that. Whether she’s working a Southern accent or wearing elf ears, Stone grasps the reality and, more importantly, can pivot on a dime between delicate human moments and laugh-out-loud bits. She does more than keep up; she drives the dramatic journey.

And yet if any one performer embodies an ideal version of “Maniac,” it’s Justin Theroux. As the experiment’s founder, Dr. James K. Mantleray, Theroux is tasked with the most outrageous scenes — he has three introductions, and each is more extraordinary than the last — yet the doc never flies off into dismissible buffoonery. Despite it all, Theroux reads between the lines of each scene and mines the most authenticity out of a pretty preposterous character. He understands how a moment can be played for laughs and tragedy simultaneously, and he finds both, time and time again. (Let it be known Sally Field is just as good, albeit less pivotal, and the only reason more is not said of her talents now is for fear of spoilers.)

Hill, however, struggles. Convincing as a despondent, trapped, and isolated figure in the real world, the actor slips off-base when Owen has to transform into an imaginary character. While Stone can find a little bit of Annie in each of her alt-reality personas, Hill disappears into each new role so much it’s hard to see Owen in there, and the new identities aren’t as compelling on their own. He lacks the elasticity to spring back and forth without losing the tether, making each slice of Owen’s psyche engaging, but less than invigorating.

There are no answers to many of the questions raised in “Maniac” — not the least of which is how to fix a mind that may not need to be “fixed” — so it’s the series’ responsibility to find profundity, meaning, and humanity within the characters’ search. On occasion, Somerville and Fukunaga deliver these responses within their many spinning wheels. Other times, the monotony of exposition or redundancy of the actions become tiresome. By the time the C pill kicks in, it’s enough already with these fake worlds — the sheen of their unpredictable non-realities have worn off and reality is in high demand. Yet what’s expected to be a deflated emotional payoff is still powerful enough to stoke a reaction. There are simmering feelings where you may not expect them.

To that end, “Maniac” is a lot like its scientists. Academic and alienating yet surprisingly grounded, the miniseries should inspire many hot takes, term papers, and devout study of its visual prowess. For those looking to study a TV show, look no further. For those looking to fall in love, well, there’s no pill for that.

This Article is related to: Television and tagged Maniac, Netflix, TV Reviews