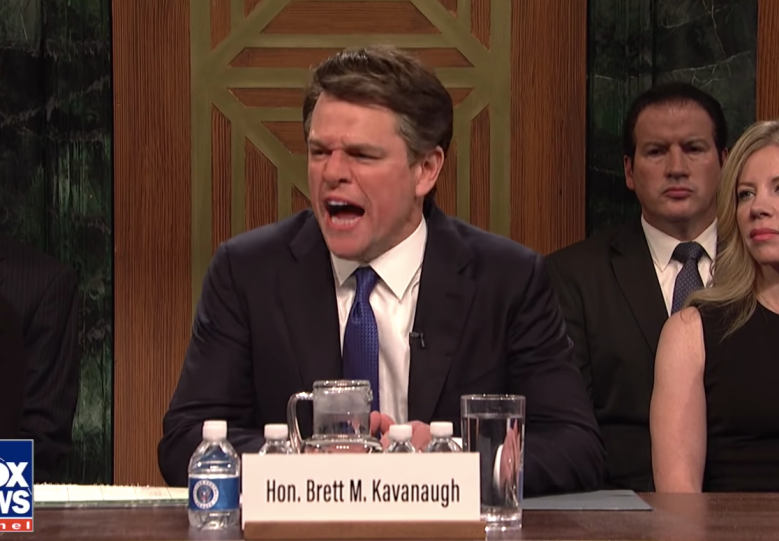 Brett Kavanaugh likes beer. You know who else likes beer? Matt Damon’s version of Brett Kavanaugh, which debuted to raucous applause during the cold open of last night’s season premiere of “Saturday Night Live.” The skit aired just two days after the Supreme Court nominee went on an angry, unhinged, and conspiratorial rant before the Senate Judiciary Committee over Dr. Christine Blasey Ford’s accusation that he sexually assaulted her when the two were in high school.

“Let me tell you this,” Damon says as he begins his furious screed. “I’m going to start at an 11. I’m going to take it to about a 15 real quick. First of all, I showed this speech to almost no one — not my family, not my friends…this is my speech. There are others like it, but this is mine. I wrote it myself last night while screaming into an empty bag of Doritos.”

He displays a full range of emotions during his minutes-long rant, veering from anger to tears as he discusses the “con job” he’s enduring as well as those “beautiful, creepy calendars” Kavanaugh couldn’t stop talking about during the hearing. “I’m not backing down, you sons of bitches,” Damon says with open defiance. “I don’t know the meaning of the word ‘stop!’”

Asked by Rachel Dratch’s version of Senator Amy Klobuchar whether he ever drank to excess, Damon offers one of his funniest responses: “You mean was I cool? Yeah.”

Mostly, though, he’s just mad. “Am I angry? You’re damn right, but if you think I’m angry now, just wait until I get on that Supreme Court — because then you’re all going to pay,” he says. Suddenly the skit doesn’t seem so funny anymore, but you can still watch the full thing below.