"Mayans MC" is the next chapter in the "Sons of Anarchy" saga, but that doesn't mean its star is anything like the original prince. 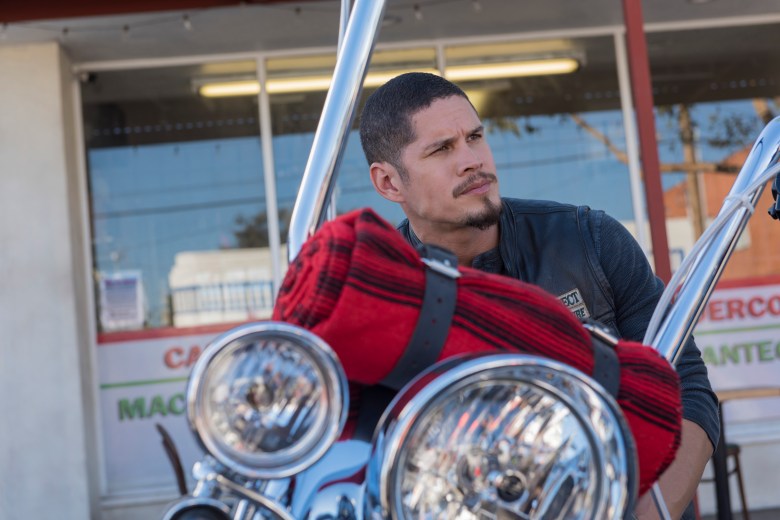 Watching Ezekiel “EZ” Reyes walk around “Mayans MC” is like watching a big kid try to find his way through a new school. He’s reticent, hunched, and observant, yet you can tell he’s learning a lot as he goes, even if he doesn’t quite belong. EZ keeps to himself, unless he’s pushed or can’t help but speak up, and the furthest his arms get from his sides are when they’re draped over the handles of his chopper.

But JD Pardo is sitting on a couch with his arms spread wide, sporting a black t-shirt and beaming smile — he’s so open and excited, the star of “Mayans MC” practically bounces on the sofa while breaking down his new role.

“[Creator] Kurt [Sutter] said it always fascinated him to think of a story where a character was so far from the crime world, who’s super intelligent, and all of a sudden he’s part of the crime world,” Pardo told IndieWire. “What does that look like?”

To Pardo, a key detail was EZ’s time behind bars. 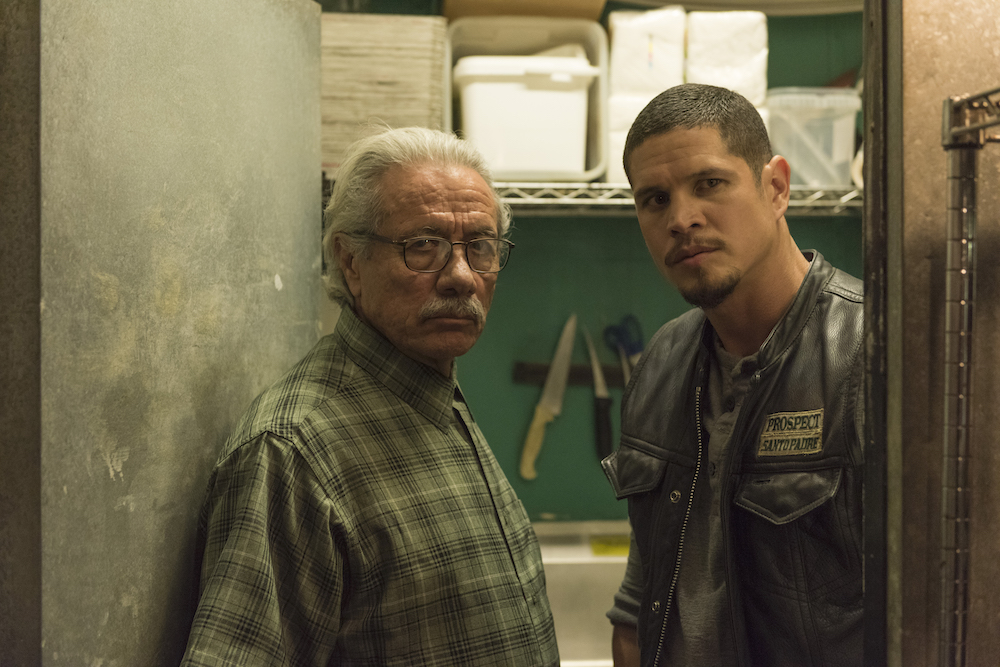 The conversations about who Ezekiel was and how he fit into the Mayans’ group started early. Sutter, who created “Sons of Anarchy,” wanted to start his follow-up series with a new protagonist far removed from his former one.

“We talked a lot about the character and how different he was going to be from Jax,” Pardo said, referencing Charlie Hunnam’s lead in “SOA.” “This show feels a little more grounded than ‘Sons of Anarchy’ felt to me. ‘Sons of Anarchy’ felt like this fantasy: You get to see the club life and the fantasy behind it, especially with someone like Jax Teller, who in the beginning is the vice president and has no problems, really. His opening scene is riding into town to buy a box of condoms. So there’s a fantasy element to that, but with Mayans […] EZ was never supposed to be a part of this club, and he did go to prison. You get to see how all this affected him. I wouldn’t expect to see the next Jax Teller.”

When it came to depicting an ex-convict, Pardo credits “Mayans” co-creator Elgin James, who was sent to prison for extortion in 2011, for informing the character. Making movies helped turn James’ life around, and Pardo is grateful for the writer/director’s insight into a life he hasn’t experienced.

“Elgin really helped me with the psychology that goes on; the emotional and mental impact that serving time has on an individual,” Pardo said. “That’s what I really wanted to focus on with EZ. I think in watching ‘Sons’ and a lot of other shows, if you go to prison, it’s just another day. Then you come out and you’re fine. You just go back to doing what you’re doing.” 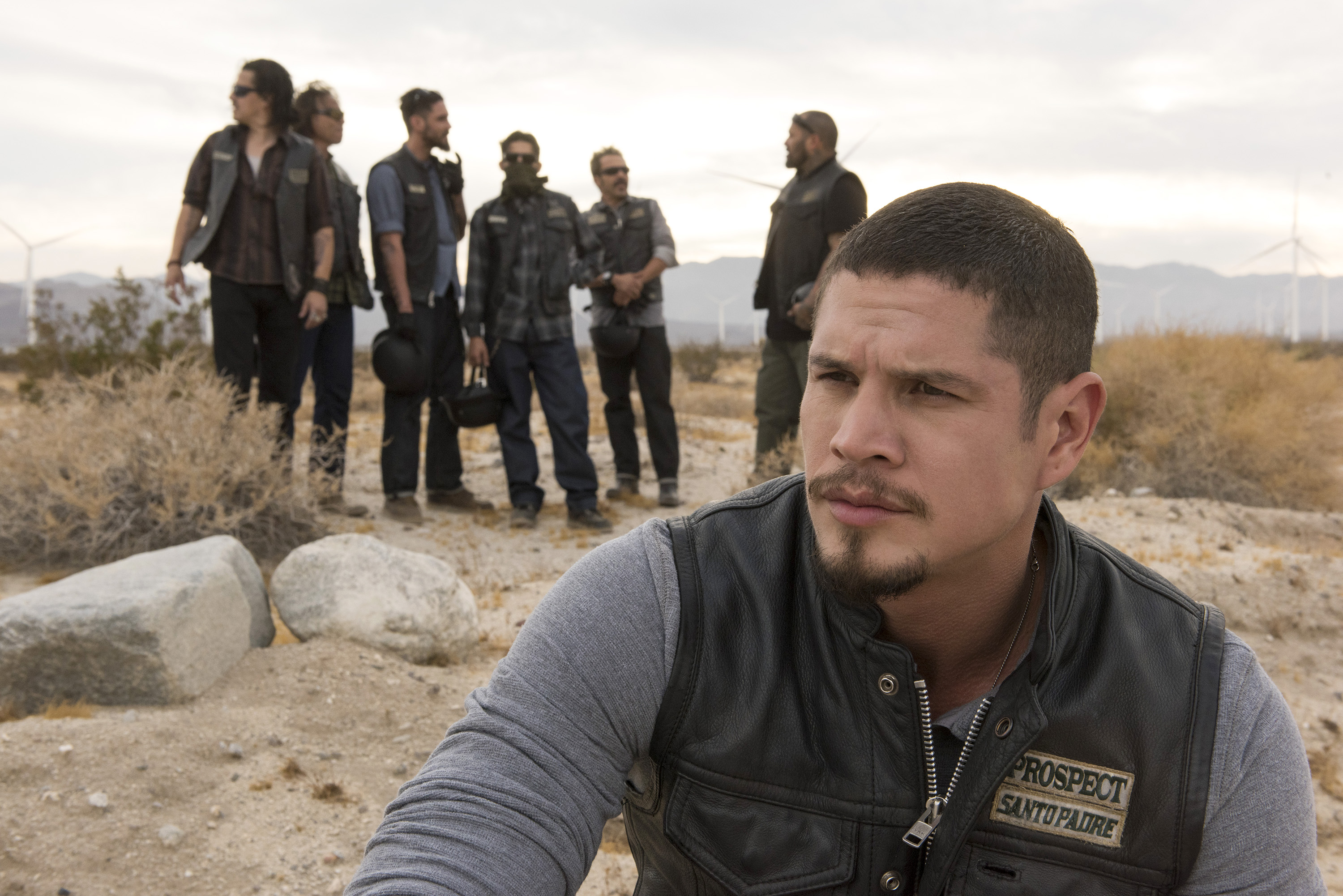 That’s not the case here. The effects are lasting, especially given EZ’s mysterious origins. In the premiere, he’s shown wearing a Stanford sweatshirt in a flashback and appears to be on the straight and narrow. But something happened to push him into becoming a DEA informant instead of a university graduate — something the audience hasn’t learned yet.

“I knew that he was going to Stanford, that he wasn’t a part of the MC life, that he was a golden boy in his community, and that he was super smart — that he had this photographic memory, which I thought was super cool,” Pardo said, recalling his early conversations about EZ. “I knew he went to prison, but I didn’t know exactly why. And then when they told me, I was like, ‘Oh, OK. But…why?’ […] they said, ‘Yeah, we can’t tell you that yet.'”

Pardo said he wishes he’d known, but in time, more and more layers of the stoic central figure will reveal themselves — to everyone.

“I know where EZ’s going to go, and I’ll be able to show a little bit more of his charisma and a little bit more of his personality and who he is as a whole person,” Pardo said. “The survival aspect of this character comes in, and he eventually says, ‘No. No, I’m here for a reason, and I’m not going to just be a follower. I’m going to be a leader.’ So I think as it goes on, you’ll see EZ open up. […] But for right now, I wanted to start off with this guy who’s just locked up and haunted.”

This Article is related to: Television and tagged FX, JD Pardo, Mayans MC