In Mikhail Gorbachev, the eighth and final President of the Soviet Union, Werner Herzog has finally met his match. 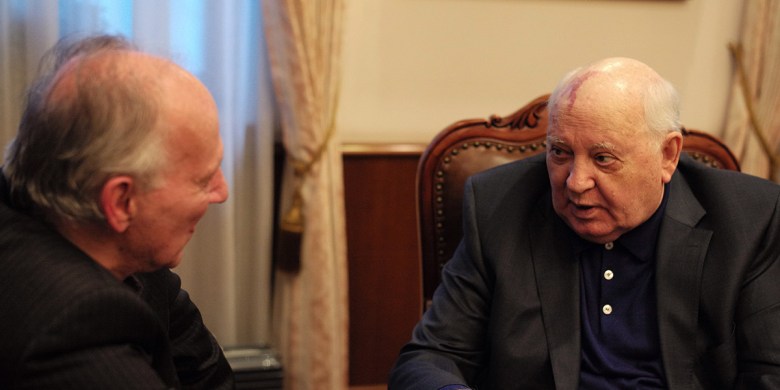 With Mikhail Gorbachev — the eighth and final President of the Soviet Union — Werner Herzog has finally met his match. In the opening seconds of the legendary filmmaker’s latest documentary, Herzog sits across from the retired world leader responsible for hits like glasnost and perestroika, and attempts to hijack the man’s life story for his own ecstatic purposes.

“Meeting Gorbachev, for a German, is burdened by history” he narrates in his signature drone of despair, alluding to the violence of World War II and already trying to reframe the facts in order to heighten the emotional truths behind them. “The first German you met wanted to kill you,” Herzog declares to his star, hoping to gaslight Mikhail Gorbachev into believing that his life has always been a Herzog movie waiting to happen. It’s the same technique the filmmaker used to portray Dieter Dengler, the Woodcarver Steiner, and Timothy Treadwell, twisting their lives (and their deaths) into haunting stories about the beauty of demented men and the impossible burden of their dreams.

Gorbachev isn’t having any of it. “No,” he firmly replies to the filmmaker’s juicy conversation prompt, leaving Herzog with a stunned look on his face that we’ve never really seen before. Not even close. In reality, Gorbachev explains in Russian, the first Germans he met were the sweet couple who owned the local candy store in the bitter poor North Caucasus village where he was born. Record scratch.

Gorbachev might be 87 years old and starting to show his age, but — as will only become clearer as the film goes on — his mind is still too sharp for Herzog to successfully incept him with more exciting memories, and his will is forever too strong to be seduced into the deference the filmmaker has always demanded from the world around him. Not since Klaus Kinski has Herzog aimed his camera at such an uncontrollable subject, and that includes the erupting peaks of “Into the Volcano” and the radioactive crocodiles in “The Cave of Forgotten Dreams.”

And yet, it’s ultimately because of Gorbachev’s seeming unwillingness to fit the director’s usual mold that “Meeting Gorbachev” is able to become such a different and engaging bio-doc, as Herzog is left no other choice than to abandon the dark irony that tends to veil his work and embrace a more sincere approach. At one point, Herzog straight up tells Gorbachev that he loves him. 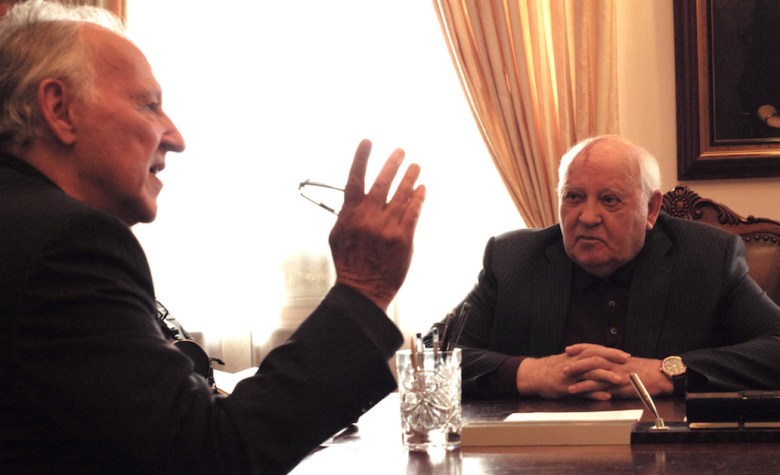 The film he’s made from their time together is a nostalgic, grateful, and surprisingly tender lament for a breed of politician that wanted to bring people together — that saw world peace as an extension of their patriotic duty, and not anathema to it.

Written by Herzog, co-directed by André Singer, and comprised of three conversations that were shot over the course of six months (a schedule that stretched out because of Gorbachev’s failing health), “Meeting Gorbachev” unfolds in a rather conventional fashion, the film moving through its subject’s life in chronological order. For the most part, Herzog’s mordant narration is lumped into the passages that cover Gorbachev’s childhood, his penchant for poetically bleak editorialization more present when the doc is sunk into the past. Shut in an editing room and safe from the buzzkill accuracy of Gorbachev’s corrections, Herzog gets to editorialize to his heart’s content. Privolnoye isn’t just a frigid peasant town in a remote stretch of tundra, it’s hell on Earth: “It’s hard to imagine that from such a godforsaken plan in the middle of nowhere, one of the greatest leaders of the 20th century emerged.”

The film starts to cede more control to its subject as Gorbachev matures, meets his wife, and begins to rise up the ranks of Nikita Khrushchev’s Communist Party. He’s a compelling documentary subject: candid and affable and burning with deep regrets. “Everything about Gorbachev was genuine,” Herzog intones, unapologetically steering the film towards hagiography as he uses archival footage and a smattering of talking head interviews to detail the upside of perestroika, the subsequent freedoms of Glasnost.

Former Prime Minister of Hungary Miklós Németh pops up to praise Gorbachev’s democratic ambitions, while James Baker (Secretary of the Treasury for one President, and Chief of Staff for another) drops in to reflect on the rare understanding between Gorbachev and Reagan, and to mourn their short-lived progress in halting the nuclear arms race. No one invokes Putin and Trump, but the implications are deafening, not least of all when Gorbachev insists that ending the Cold War was a global victory, rather than just an American one.

But while this might be an unusually straightforward Werner Herzog documentary, it’s still a Werner Herzog documentary, and the filmmaker makes sure you don’t forget that. Whether he’s swooning over Gorbachev’s story about walking the Soviet Union, poking fun at the hilarious measures that were used to make his dying predecessor look healthy enough to lead (shades of “The Death of Stalin”), or using some old Austrian news footage to illustrate a certain apathy towards the fall of the Iron Curtain (the lead story that night was about how much slugs love drinking beer), Herzog never lets Gorbachev hog the spotlight for long.

He may not get to exert the same authorship that he’s used to, but he refuses to cede his creative control. That tendency can be very amusing in the moment, but — when the last few minutes of the film suddenly pivot to the personal, with Gorbachev getting sentimental about his late wife — it’s hard not to wish Herzog had devoted more time to the full spectrum of his subject’s emotions, even if it meant he couldn’t include the scene that exists for no other reason than for Herzog to say “boogie-woogie.”

And yet, as the film winds toward its bittersweet farewell, an interesting reversal begins to take place. Gorbachev, as if sensing his failure to fit into the usual Herzog archetype, silently agrees to meet the filmmaker in the middle. Reflecting on his intentions for Russia, and ruminating on his unrealized dreams for reforming Communism in a more permanent way, we finally appreciate how much Gorbachev wanted to change the world, and how earnestly he believed that he could. He may not have been born as the hero of a Werner Herzog movie, but “Meeting Gorbachev” leaves no doubt that he’s going to die as one.

“Meeting Gorbachev” premiered at the 2018 Telluride Film Festival. It is currently seeking distribution.