Oscars are another possibility, but they aren't the focus for this 64-year-old filmmaker activist reinvigorated by the young Parkland protestors. 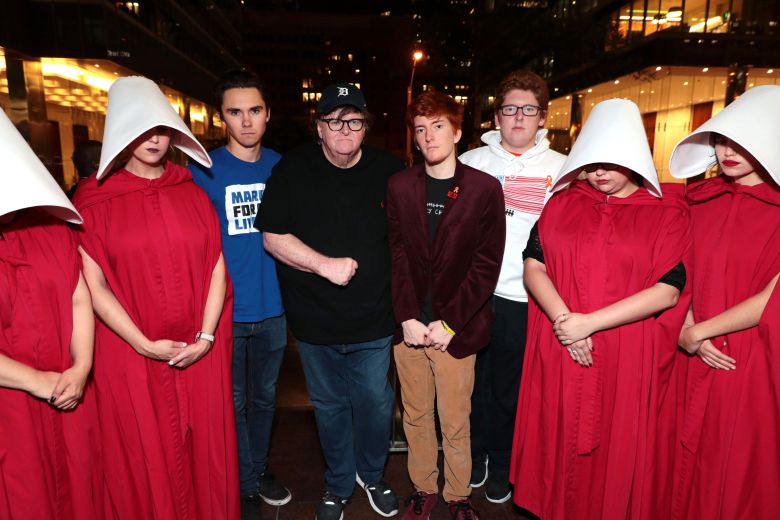 Michael Moore knows how to stage an event, especially where his star has always burned brightest. The Toronto International Film Festival welcomed him back with a standing ovation and cheers on opening night for his latest diatribe against the current political order, “Fahrenheit 11/9.” Moore pulled a surprise, bringing on stage the students from Parkland High School. “Who’s ready to save America?” asked political activist David Hogg, plugging for votes — in Canada.

“Michael for President!” yelled one fan. When Moore took the mic, he revealed that when he announced this movie, the IRS audited him for the first time. Given that he’s overpaid for years, “they have to give me the money back, with interest,” he crowed.

Always willing to embrace a marketing opportunity, Moore has commandeered a skeleton crew to release the film. They include refugees from the Oscar-winning “Spotlight” team at Open Road, led by Tom Ortenberg, and theatrical booker Steve Bunnell. “Fahrenheit 11/9” started out with an 800-screen release on September 21, expanded to 1,000 after the trailer broke, and is now at 1,600. Only a lack of P&A funds prevents it from going even wider, says Moore. (Don’t expect Alamo Drafthouse to play the film, still smarting from the acrimonious release of Moore’s last, “Where to Invade Next.”)

The movie marks a return to Moore’s anti-establishment sweet spot, and while it may not reach the heights of 2003 Oscar-winner “Bowling for Columbine” ($58.2 million worldwide) or 2004’s “Fahrenheit 9/11” ($221 million), audiences should turn up for this hugely entertaining and revealing call to action. And so might Academy voters.

One of the best scenes in the movie shows Moore sitting with high school activists in a Parkland, Fla. basement bunker in a half-empty strip mall, 10 days before the March for Our Lives. “They were planning the whole thing,” he told me at the after-party, inspired to listen to them rather them tell them what to do. “I am very sincerely moved by it. Maybe I’m in a different place. They were on that bus tour across the country to 61 cities. When they came to New York, I said, ‘come on over, I’ll show you a little bit [of the film].’ They were so moved: what they saw in America was encapsulated in this film. They have the same rage.”

Clearly, these two generations are on the same page. The movie is a rabble-rouser for anyone who opposes the Republicans. Moore sprays the mansion of Michigan Governor Rick Snyder with contaminated Flint water after he covered up the lead poisoning that still afflicts residents there, and skewers the screwy relationship between president Donald Trump and his daughter Ivanka.

The movie doesn’t spare centrist Democrats either, including Barack Obama, Hillary Clinton, and Nancy Pelosi. Moore has never hidden his leftist/socialist, Bernie Sanders-loving, leanings, and celebrates rising new Democrats such as The Bronx’s Alexandria Ocasia-Cortez. Hugely entertaining, the movie veers from one subject to another, and spends less time on Trump and Putin than on the growing resistance to them, and a lack of belief in our corrupt election systems. Of the 100 million people who don’t vote, Moore thinks most lean left, not right.

“What separates ‘Fahrenheit 11/9’ from traditional docs,” said his long-time producer Carl Deal, “is Michael has the ability to turn the film on the audience and get away with it, to force the audience to confront stuff about themselves. With every screening of the film we get closer to the answer of, ‘How the fuck did this happen?'”

The trick for Moore was to stay on track — the film centers on Flint’s water issues and the West Virginia teacher’s strike — and not be unwound by the president’s daily tsunami of breaking news. “It’s POV filmmaking, it’s Michael’s angriest work,” said Deal. “The Parkland kids landed in the forefront of everything we did in the process of finishing this film. Michael wants to encourage youth leadership. He’s waving the white flag. He’s saying ‘I’m sorry’ to the younger generation: ‘We let you down, and now save us.'”

In the editing room, Moore’s rules are simple, said Deal: “Don’t cut out a laugh, unless you absolutely have to. When in doubt, take him out. You don’t see him on camera a lot. His voice makes you believe that he’s there. The best idea wins, and it doesn’t matter where it comes from.”

Moore shut down production on the film he was developing at the Weinstein Co. well before the revelations of Harvey’s misdoings. Instead, he mounted a Broadway theater show (not a disaster, despite Trump’s tweets to the contrary), “The Terms of My Surrender.” Negotiations are already under way with producer Meghan O’Hara on reviving his series “TV Nation,” this time on TBS.

Why is he so overextended? “I have never seen Michael this driven,” said Deal. “The reason this film is so angry and passionate and effective is he’s not trying to make intellectual arguments. He’s splattered it all out there for you to see. Nothing is more important to him than creating this kind of art that will counter the horror that Trump brings to us. He’s very singleminded right now. It may seem like he’s taking on a lot, but he couldn’t see himself doing anything else.”

Moore’s plan when he hits the Flint and New York premieres and a series of talk shows: Exhort everyone to go to swing states and turn out the vote.