The original songs are a nice touch, but executive producers Phil Lord and Chris Miller can't rescue the weak humor this time. 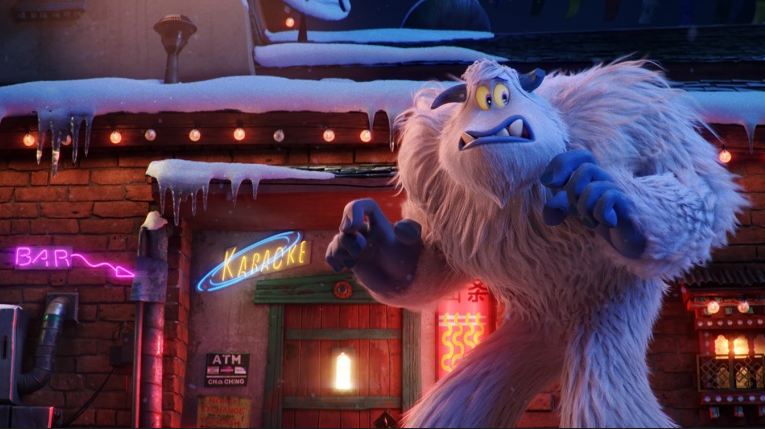 Phil Lord and Chris Miller may be executive producers on “Smallfoot,” but the movie feels like a pale imitation of their unique comedic energy. The double entendre-laden humor and catchy tunes that made “The LEGO Movie” a hit are woefully missing from “Smallfoot,” a musical that tries too hard to educate kids and not hard enough to entertain them.

The premise of “Smallfoot” is inventive enough — what if Bigfoot not only existed, but lived among a whole clan of other bigfeet in a highly advanced society on a mountaintop above the clouds? Such is the adorable village where we meet Migo (Channing Tatum), a simple gong-ringer’s son who wants nothing more than to grow up and continue his father’s (Danny DeVito) legacy. What, you may ask, is a gong-ringer? It’s not good to ask too many questions in this village, but…the gong-ringer rings the gong every day to make the giant snail rise in the sky. Migo’s community keeps busy with a string of such seemingly meaningless chores, as dictated by a robe of ancient stones that must never be questioned.

That is, until Migo stumbles into a fearsome creature only mentioned in tall tales — a “smallfoot.” The “smallfoot” in question is, in fact, a fame-chasing British television host named Percy (James Corden), whose enormous ego (and small feet) confirm that he is very much human. When Migo shares his discovery with the village, he is banished by the Stonekeeper (Common) for questioning the stones. With the help of the village misfits, led by the Stonekeeper’s daughter Meechee (Zendaya), Migo heads below the clouds to find Percy and bring him back in order to prove his legitimacy.

“Smallfoot” excels most with its physical comedy, including a prolonged Looney Tunes-esque sequence that Migo falling from the sky. When Migo and Percy finally meet, Percy’s frenzied ravings hit Migo’s ears like adorable high-pitched squeaks to amusing effect. The interspecies comedy reaches its peak with a gag about a fearsome bear’s roars, which translates to Migo as a Mama Bear’s (Patricia Heaton!) impassioned fretting that she just got the kids to sleep and only has six months to rest.

“Smallfoot” boasts some epic voice talent, but LeBron James, Gina Rodriguez and Yara Shahidi are wasted in under-written roles with few distinguishing characteristics (other than the tickling image of LeBron as a ridiculous puffy purple yeti.) Most memorable out of the band of misfits is Fleem (Ely Henry), simply because he has a personality, even if it’s just excessively irritating. The original songs are a nice touch, but never particularly memorable.

“Smallfoot” really flounders with its obligatory message-mongering: a hodgepodge of didacticism about the importance of celebrating differences, asking questions, never fearing the unknown, or judging someone because they look different. Plenty of sound lessons in there, to be sure, but without a singular focus, they all blend into one.

To the imaginary yetis of “Smallfoot,” humans are just as scary — if not scarier — than a hulking, hairy, roaring beast. In that way, writers Karey Kirkpatrick and Clare Sera put a mirror up to the baser instincts of humanity, and the reflection isn’t a pretty one. Unfortunately, the optimistic finale is too hurried to be fully convincing, and we’re left wondering whether Migo (and the audience) would have been better off staying up on his mountain.

This Article is related to: Film and tagged Channing Tatum, Reviews, Smallfoot