John Chester's chronicle of Apricot Lane Farms is like "Planet Earth" meets "We Bought a Zoo." 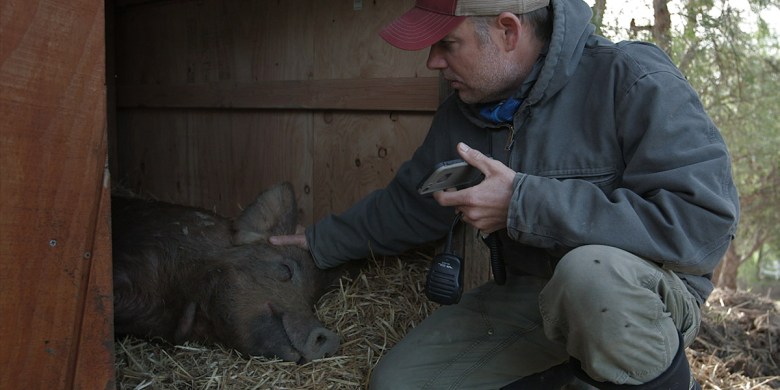 Editor’s note: This review was originally published at the 2018 Telluride Film Festival. Neon releases the film on Friday, May 10.

From the opening minutes of “The Biggest Little Farm,” John Chester makes it clear his utopian vision is going to fail. With his wife Molly, a culinary writer, the filmmaker abandoned their Santa Monica home to launch a sustainable farm an hour outside the city. The movie tracks this epic saga across seven years of hiccups and tragic developments as the reality of taming nature settles in. A gorgeous and often devastating look at good intentions slamming into harsh practical challenges, “The Biggest Little Farm” is the rare eco-friendly documentary that reaches beyond the celebratory formula to explore the application of its environmental message in detail. It’s a remarkable educational experience for anyone eager to go back to the basics. In the process, it arrives at a deeper understanding of the underlying impulse, while delivering an emotionally resonant narrative with plenty of cute animals to spare.

As Chester explains in a constant narration, the couple’s decision to launch Apricot Lane Farms stemmed from a rather adorable place: When their dog Todd can’t stop barking and drives the neighbors nuts, they decide it’s time to find him some bigger terrain. Ample home video footage and cheery animation chronicles their audacious vision of a farmland where every ingredient adheres to the same life cycle — plants and animals living in harmony, feeding off one another in a constant process of survival.

And then the work begins. Chester, a television cinematographer whose credits include “Safari Vet School,” seemingly had his camera running at every pertinent moment. When the couple first arrives at their sprawling new home, the terrain is anything but fertile. The ground is a cracked, dreary wasteland, the orchards need a lot of work, and the animals need to be seriously tamed. At first, their ace in the hole comes in the from of veteran farmer Alan York, who guides them through a process he assures them will take time to fit together. But when York abruptly drops out of the picture a year into the experience, the Chesters are left coping with a project far more unwieldy than they could have anticipated.

An official description for the documentary compares it to “Little House on the Prairie,” but Chester’s aw-shucks voiceover casts the family’s efforts as a real-life “We Bought a Zoo,” as these good-natured city dwellers come to terms with the harsh ambivalence of their new home. In short order, Chester’s bountiful footage recounts the various complications that threaten their farm’s survival: hungry coyotes, a nasty snail infestation, and one feverish pig all get their moments, but the stakes really kick up with the bigger threats of a crippling draught, toxic algae, and wildfires.

With each new development, Chester’s cinematic ambition expands, giving the material a richness not apparent in its cheekier first act. Spectacular time lapse of plants and animals, paired with swooning drone footage that captures the full scale of the farmland at various moments, create a stunning visual tapestry as profoundly moving as anything on “Planet Earth.” But recurring cutaways to Todd the dog, gazing at the changing processes around him, ground the story in the personal journey at hand.

At times, Chester overplays the dramatic nature of the material, with over-the-top music and a voiceover so inclined to offer poetic observations about every new twist that viewers never get the chance to think it through for themselves. Fortunately, many of his ideas are poignant enough to justify the intrusion, such as when he muses on “the power of uncompromising idealism,” or, witnessing the stars at night, concludes that “I spin inside that which I see.”

With so much material cobbled together to replicate this bumpy road to outdoorsmanship, “Biggest Little Farm” is often staggering in its exhaustive overview, and provides a handy guide to anyone dreaming of escaping city life to run their own show. Above all else, the movie demonstrates just how little nature welcomes good intentions with open arms — and why it’s worth seeking the hug anyway.

“The Biggest Little Farm” premiered at the Telluride Film Festival.

This Article is related to: Film and tagged John Chester, Reviews, The Biggest Little Farm, TIFF