From Dance Dance Resolution to Tay Zonday, here are some of the best Easter eggs from “Everything Is Bonzer!” 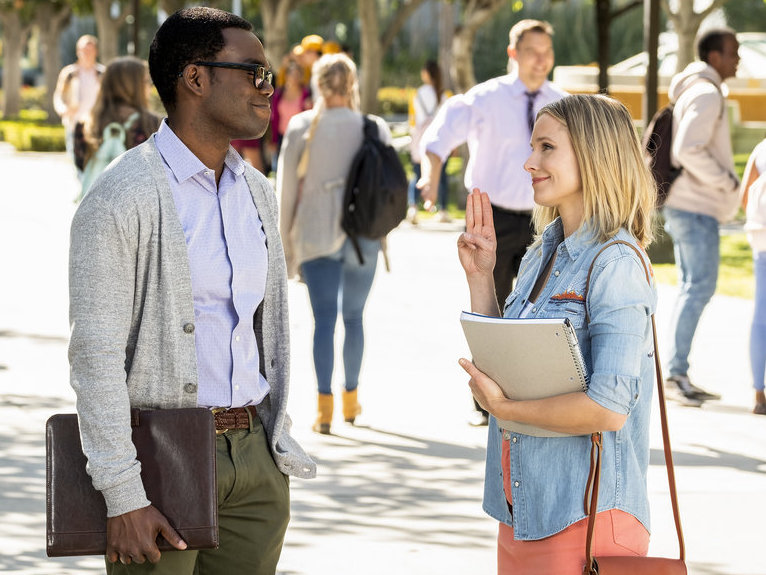 [Editor’s Note: The following contains spoilers from “The Good Place” Season 3, Episode 1, “Everything Is Bonzer!” For a non-spoilery read, check out IndieWire’s Season 3 review.]

“The Good Place” may have returned for a third season with yet another rejiggered premise, but it still delivered its signature laughs, wordplay and of course, the Easter eggs endemic to the show. The series is always worth a re-watch thanks to the background jokes, hilarious asides, and other sneaky bits of humor thrown in.

In the two-part premiere, each of the four Bad Place experiment subjects have their lives reset at the point of their death so that Michael (Ted Danson) can prove to Judge Gen (Maya Rudolph) that given a second chance, they’d become good people. When they all backslide though, he schemes to get them together so that they have the beneficial influence on each other that they had in the faux Good Place. (This season also includes the very welcome addition of Kirby Howell-Baptiste, who appeared as Sasha Smith in HBO’s “Barry” and as the incredibly candid Elena in BBC America’s “Killing Eve.”)

Seeing as how “The Good Place” is set on Earth this season, that has cut down on the usual deluge of punny names that seem to be part of the afterlife, but there are still plenty of others jokes to be found. “The Good Place” is also rife with pop-culture references, so we’ve had to be selective about what is highlighted and assume that most of the casual mentions — such as “The Bachelor” and all of Tahani’s name-dropping — don’t need any additional explanation.

Here then, are the best references and Easter eggs hidden in the Season 3 premiere:

Each season of “The Good Place” has opened with a similarly structured title. Season 1 began with “Everything Is Fine,” while Season 2 upgraded that to “Everything Is Great!” For the show’s third outing, in honor of its setting Down Under, the premiere episode is titled, “Everything Is Bonzer!” For those who need to brush up on their Australian lingo, “bonzer” means “excellent” or “first-rate.” Totally zonkatronic, right?

We Crumb From a Land Down Under 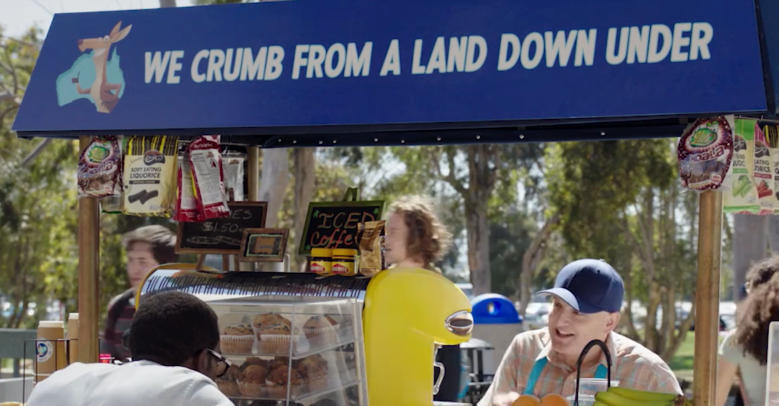 Look, just because writer/co-executive producer/two-time very serious Emmy nominee Megan Amram couldn’t fit in all of her food puns last season doesn’t mean that they’re the menu. (pause for groans). The beverage and pastry stand that Chidi (William Jackson Harper) frequents sports a name that is a reference to “Down Under,” the 1981 hit by Aussie band Men at Work. It features the line, “I come from the land down under,” and references to vegemite and “chunder,” which might be a normal bodily reaction if you topped your blueberry muffin with vegemite. Take a listen:

When Eleanor (Kristen Bell) tells Chidi she’s a garbage bag from Arizona, she adds, “Our biggest exports are racist sheriffs and HPV.” While we can’t attest to the STD, the sheriff she is referring to is Joe Arpaio. He served as the 36th Sheriff of Maricopa County, Arizona for 24 years and styled himself as “America’s Toughest Sheriff.” He’s known for his outspoken stance against illegal immigration, had been a staunch birther, and the U.S. Department of Justice concluded that Arpaio oversaw the worst pattern of racial profiling in U.S. history in his office.

The episode also includes a short interlude in which Chidi speaks French briefly to someone who visits his office. He explains to Eleanor, “I grew up in Senegal so my native language is French, but I went to American schools so I also speak English and German and Greek and Latin, just in case it ever comes back.”

In “The Good Place” Season 1, it was explained that it seemed to him everyone was speaking French because the neighborhood Michael created translates everything into the language each individual person is most comfortable with. Therefore, when the show reset yet again in the Season 2 finale, fans wanted to know why Chidi was speaking English on Earth, and this exposition answered that. 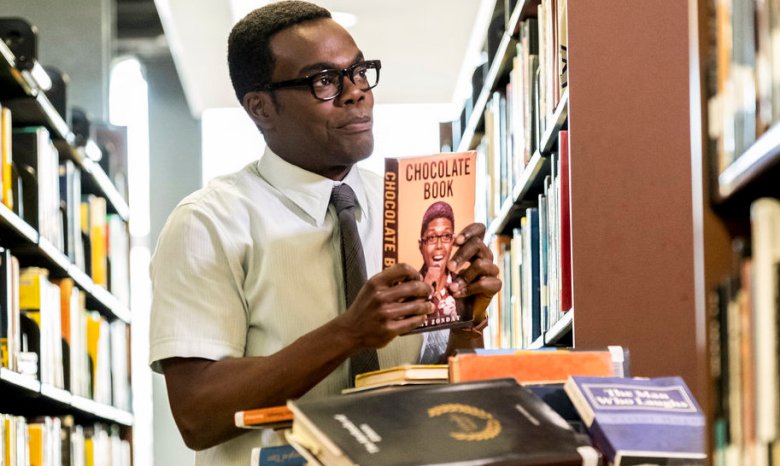 Ah, if only this were real. YouTube sensation known for his bass singing voice became a viral sensation in April 2007 with his original song “Chocolate Rain,” which now has over 118 million views. He’s been able to parlay that fame into appearances, commercials, parodies, guest vocals (such as on Weezer’s “Pork and Beans”), and voiceover work on “Transformers.” It’s been over 10 years since his voice captured people’s attentions, and “The Good Place” still hasn’t forgotten him. May his chocolate reign never end.

One of the people that the demon Shawn (Marc Evan Jackson) has punished comes into his war room carrying a telltale pink box labeled Dunkin’ Spiders, a reference to Dunkin’ Donuts, which in real life is dropping the “donuts” part of its name.

As evidence of his truly wretched nature, Shawn requests his assistant to play a “deeply terrible” song, which turns out to be Richard Marx’s 1989 platinum hit “Right Here Waiting.” Judge for yourself:

While Eleanor listens to Chidi’s philosophy lecture, she doodles a picture of a burrito because she says that the name Aristotle reminded her of Chipotle. This could also be a sneaky reference to the Season 2 episode “The Burrito,” in which the four humans go to Judge Gen’s chambers for the first time, and ready to expect anything, see a lone burrito on a plate and think that must be the judge. (Also, in Eleanor’s honor, we shall henceforth call the establishment “Chip—o-totle.”) This isn’t technically name-dropping, but it should be noted that among the contacts that begin with “T” in Tahani’s (Jameela Jamil) phone are Taika Waititi, The Rock, and Tilda Swinton.

On his several trips to Earth, Michael portrays various alter egos in order to nudge the four along. The identities he takes on reflect his childlike ignorance and yet sense of fun at all things human. While the names don’t qualify as actual references per se, they are worth a shout-out, especially international talent scout Zack Pizzazz and Professor Charles Brainman (actually that could qualify as a reference to Marvel’s Professor Charles Xavier, a powerful telepath). 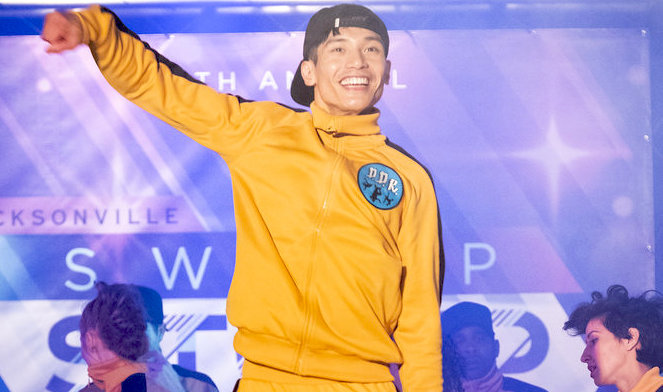 The references here are so layered, we want to cry from gratitude. The name of Jason’s (Manny Jacinto) new dance crew is Dance Dance Resolution, which is partly a reference to how he wants to turn his life around but also the Season 2 episode in which Michael reset the Good Place 802 times. Written by the aforementioned Amram, the title “Dance Dance Resolution” is also a reference to the dancing video game series Dance Dance Revolution by Konami, in which players step on a dance platform with arrows to musical and visual cues. It’s also known as DDR, which are the letters on Jason’s jumpsuit.

The jumpsuits that Jason and the rest of Dance Dance Resolution wear are not yellow with black stripes by accident. They’re a tribute to the legendary Bruce Lee’s outfit in the 1972 Hong Kong martial arts film “Game of Death.”

Everyone knows “NCIS,” but in order to distract Judge Gen, Janet (D’Arcy Carden) quickly recommends another Mark Harmon project to watch. In the 1988 coming-of-age romantic drama, Harmon plays a washed-up ballplayer, who goes back home to gather the ashes of his childhood sweetheart (Jodie Foster), who had killed herself. At the time of shooting, Harmon was part owner of minor league baseball team the San Bernardino Spirit, and used the team and home field for the opening and closing scene.

Remember that obnoxious demon who tried to take Eleanor to the real Bad Place on his train to hell? Apparently, Trevor (Adam Scott) is back to join Chidi’s near-death experience research study because he “almost run over by a train a few months ago.” Since his joining occurred on the heels of Shawn finding out what the four humans were up to on Earth, and said humans were not showing progress in becoming good, we suspect that Trevor may be a bad influence on them.

This Article is related to: Television and tagged Easter Eggs, NBC, The Good Place