The actress dazzles in George Tillman, Jr.'s entertaining and smart adaptation of Angie Thomas' popular novel inspired by the murder of Oscar Grant. 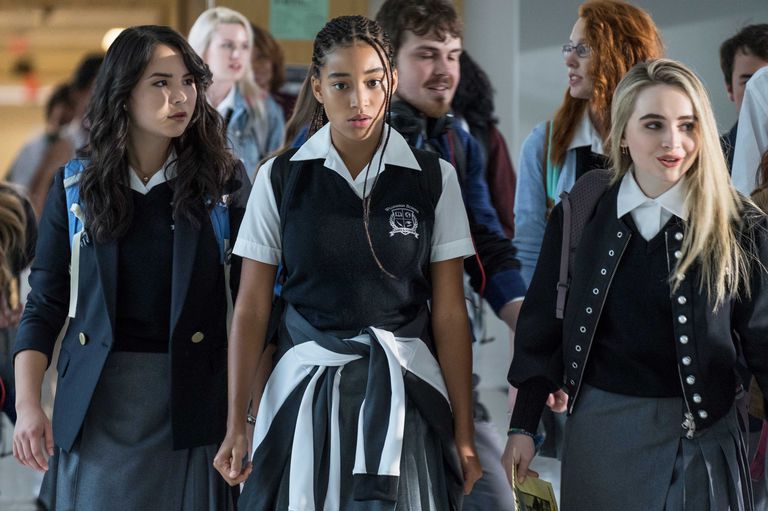 There are two Starr Carters. There’s the Starr Carter who was born and raised in the (fictional, though it’s easy to find real-world comparisons) neighborhood of Garden Heights. Predominantly black and consistently plagued by violence, it’s the same place her parents came from and one that her father is determined to stick with, no matter the cost. Then there’s the Starr Carter who attends the tony Williamson School with its mostly white student body, where she monitors every word she says and the way she says it so as to not be perceived as “ghetto.”

In George Tillman, Jr.’s “The Hate U Give,” adapted by Audrey Wells from Angie Thomas’ National Book Award winner of the same name, Starr’s duality is the driving force of a too-timely story, and star Amandla Stenberg easily embodies both sides of her character, continuing to prove why she is one of the most exciting young actresses working today. Part coming-of-age story, part ripped-from-the-headlines drama, “The Hate U Give” is consumed by seemingly disparate existences, and as Starr’s identities collide after a horrific tragedy,Tillman and his star hold together a story that seems ready to combust at any moment.

Stenberg, who is always good and somehow gets better with every role, is surrounded by a stellar supporting cast that keeps the film and its many messages ticking right along: There’s her father, Maverick (a heartbreaking Russell Hornsby), and her mother Lisa (Regina Hall, reliably great), bent on raising their kids to a better life. She has loving and smart brothers Seven (Lamar Johnson) and Sekani (TJ Wright), and even her well-meaning boyfriend Chris (K.J. Apa) is desperate to more closely understand his girlfriend. Starr’s desire to bisect her life has boxed in all of the people she loves most, and she is forced to join everything (and everyone) together after witnessing a terrible crime.

Thomas was inspired to write her novel after the 2009 police shooting of Oscar Grant, and Tillman has turned it into an urgent film that never feels cheap, a lived-in story with a major message. After a neighborhood house party turns violent, Starr and her childhood friend Khalil (Algee Smith, pure charm) make a break for it and end up getting pulled over for a throwaway traffic mistake. While Starr has spent her entire life being taught how to behave around police — the film literally opens with Maverick instructing the kids on how to survive a run-in, a heartbreaking and still-necessary lesson for many young black lives — Khalil is less concerned, and as a hysterical Starr begs her friend to stay still, he reaches back into the car for a hairbrush.

It’s not a gun, but that doesn’t matter to the police officer who has pulled them over, and he promptly shoots and kills Khalil as Starr struggles to comfort her friend. It’s a brutal, visceral scene, but Tillman continues to thread the needle between wrenching drama and classic coming-of-age, even as Starr’s ability to keep her worlds separate falls to pieces. As the only witness to the crime, Starr wants to honor Khalil, but doing so threatens her own safety and anonymity. A subplot about a nefarious local drug lord (Anthony Mackie) whom Khalil worked for further muddies the waters, and Starr’s predicament soon goes from being an emotional one to one that could threaten her life.

And yet, life goes on. As Starr cycles through a “normal” teenage experience, from prepping for prom to fighting with her boyfriend, she must also grapple with emotional trauma and her growing awareness of the movements taking shape outside her door, getting hip to #BlackLivesMatter just as her own classmates are using the same revolution as a way to act hip. For all of its weighty subject matter, “The Hate U Give” is consistently entertaining and unabashedly designed for a wide audience. Starr’s worlds coexist in the film just as they do in her life.

While the film is mostly concerned with Starr’s story, Wells’ screenplay includes a handful of on-the-nose histrionics from other characters that threaten to rob the film of its veracity. Common appears as Starr’s uncle Carlos, a police officer who delivers a speech designed to remind people that not all cops are bad. Issa Rae appears briefly as a well-intentioned community organizer who pushes Starr to realize the power of her own experience, a plot point that doesn’t need to be hammered home in a film entirely dedicated to that end.

Tillman course corrects those missteps, however, and the film ends on a powerful note that beautifully marries both sides of Starr’s world. It’s a film that contains multitudes, and only asks for a world willing to do the same.

“The Hate U Give” premiered at the Toronto International Film Festival. Fox 2000 will debut it in theaters October 19.

This Article is related to: Film and tagged Amandla Stenberg, Reviews, The Hate U Give, TIFF