Farmiga also promises that Ryan Murphy "has some tricks up his sleeve" for the upcoming "American Horror Story: Apocalypse." 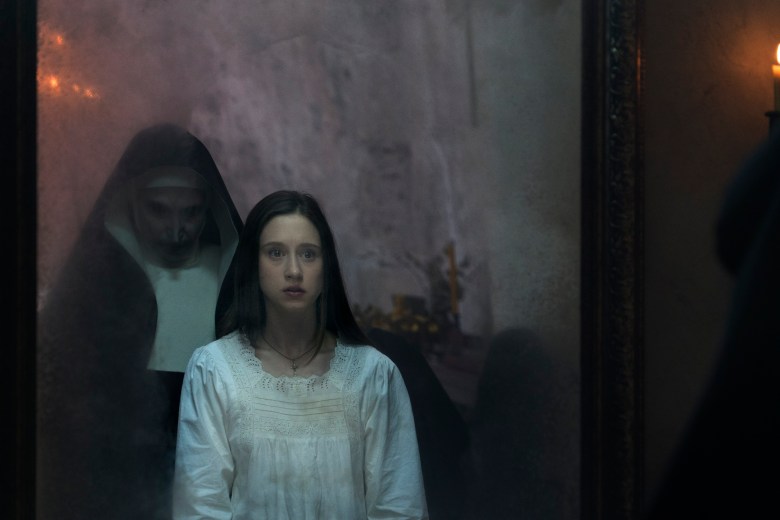 Bonnie Aarons and Taissa Farmiga in ‘The Nun’

In 2013, James Wan’s “The Conjuring” took the horror world and the box office by storm, with a terrifying possession film allegedly based on the real-life experiences of Ed and Lorraine Warren (Patrick Wilson and Vera Farmiga), demonology experts called in by the Catholic Church. In the 2016 “The Conjuring 2,” Lorraine is haunted by a truly horrific vision of a demonic nun, later revealed to be the demon Valek. The demon nun was one of the film’s scariest creations (sorry, Crooked Man), and it wasn’t long before an origin-story spinoff was in the works.

In “The Nun,” Taissa Farmiga stars as Sister Irene, a young novice who experiences holy visions and has yet to take her final vows. After the mysterious death of a young nun at an isolated Romanian Abbey, the Vatican sends Sister Irene along with Father Burke (Demian Bichir) to seek answers. There, they uncover a sinister evil lurking in what was once holy ground and this demonic force threatens to corrupt everything in its path.

With Taissa Farmiga front and center in the latest “Conjuring” universe film, it’s tempting to draw a connection to her sister Vera Farmiga’s portrayal of Lorraine. However, Taissa insists the casting was purely coincidental.

“I definitely know how much fun Vera had on the films, but honestly this was just a giant coincidence,” Farmiga said. “My agent sent me an audition for this movie that was a spinoff of ‘The Conjuring’ films so I thought ‘Oh great, I probably won’t get it, but I’ll go for it,’ because I really loved the script, I loved the characters, and I thought it could really be something with Sister Irene.”

Farmiga excels as the innocent Sister Irene against the venomous Valek. “The Nun” plays upon the light-and-dark battle throughout the film, continuing the genre’s obsession with Catholicism and offering beautiful but horrifying images of religion turned rotten. For her part, Farmiga understands the appeal, which goes beyond the struggle between pure and putrid.

“When [you have] someone who’s supposed to be so pure and so confident in their beliefs, and they get scared, I think that’s one of the most terrifying things,” she said. “I just got chills talking about it, because then you know there’s something to be terrified of.”

Taissa Farming in ‘The Nun.’

While horror fans will likely be thrilled by the scares packed into the “The Nun,” it’s not Farmiga’s first foray into the horror genre. After a breakout performance in older sister Vera’s directorial debut, “Higher Ground,” Taissa was cast in the first season of Ryan Murphy’s horror anthology series “American Horror Story” as star-crossed teenager Violet Harmon. Farmiga returned to the series once again in “Coven,” as teen witch Zoe Benson, followed by a starring role in the 2015 slasher comedy “The Final Girls.” Farmiga also made a guest appearance in an episode of “American Horror Story: Roanoke,” during the show’s seventh season.

Farmiga returns to “American Horror Story” with the new season, “Apocalypse,” as well as a starring role in an adaptation of Shirley Jackson’s 1962 novel “We Have Always Lived in the Castle,” which also stars Sebastian Stan and Alexandria Daddario. Despite her frequent work in the genre, Farmiga isn’t a horror fan, something she quickly realized while working on “American Horror Story.”

“I do not like horror movies,” Farmiga said. “I always had an amazing time on ‘American Horror Story,’ [but] it actually helped me discover that I’m a very scared person. I’m very jumpy, I scare very easily. So, when you have to go play these emotions like fear and terror, I realized that comes kind of natural to me.”

Despite being afraid of the finished product, Farmiga says being on the set of “The Nun” and “American Horror Story” was actually a lot of fun. In the upcoming “Apocalypse,” Farmiga will reprise both her “Murder House” and “Coven” characters.

While the fans of Ryan Murphy’s horror anthology hit will likely be thrilled to see her return, Farmiga said returning to the series was a scary prospect until she stepped onto the set again. Then, everything clicked into place.

“It was wild,” Farmiga said. “It’s just like going home to family you haven’t seen in a long time, so you’re a little nervous but then you walk in and you’re like ‘Oh, I know this, I know my place in this orbit, I know how we all connect and how we communicate,’ and then you’re just kind of in it and it feels like the years never happened. It’s really an extraordinary feeling.”

Farmiga remained tight-lipped on details about “Apocalypse,” but she did tease that fans would be excited for what was in store for the show’s eighth season.

“Ryan Murphy has some tricks up his sleeve,” Farmiga said. “I can hint at the fact that there’s a few characters that audiences loved and fingers crossed they’re most likely going to be able to get to see them one last time.”

This Article is related to: Film and tagged American Horror Story, Taissa Farmiga, The Nun