You can see what Shane Black was going for with his latest Hollywood sequel, but this compromised mess is the first bad film of his career. 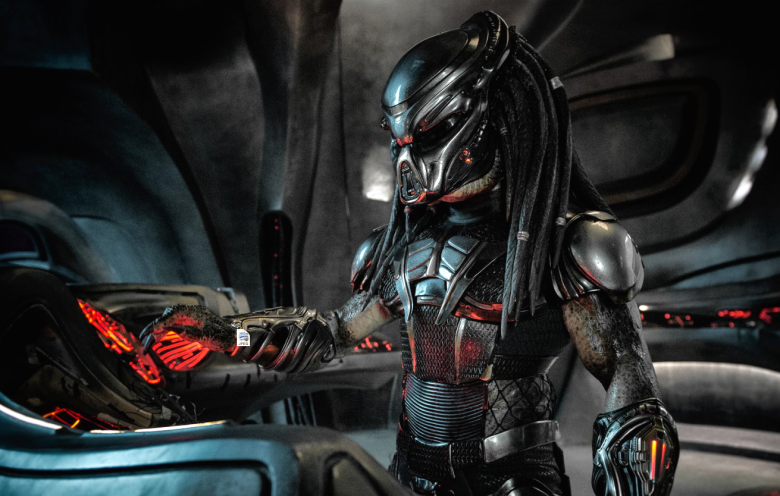 Perhaps the best thing that can be said about “The Predator” is that, at times, you can appreciate what Shane Black was trying to accomplish. A noble but profoundly botched attempt to crossbreed an ’80s action movie with contemporary franchise sensibilities, “The Predator” wants to take what’s old and make it new again. By the gutless standards of current studio filmmaking, that practically makes the film a mad science experiment. But this miserable chimera — skinned with Black’s wicked sense of humor, but too underdeveloped to survive on its wits alone — should never have been let out of the lab, as it poses a serious threat of boring people to death.

Arriving more than 30 years since Arnold Schwarzenegger first rumbled in the jungle with the ugliest hunter in the galaxy, “The Predator” channels the kind of muscular schlock you might have rented on VHS from your local video store. It’s full of ultra-violence, driven by testosterone, and scattered with those chintzy old explosions that erupted in welding sparks instead of actual fire. At the same time, it also aims to satisfy modern audiences (and studio executives) by offering an overdose of special effects (brace yourself for Preda-dogs), a mercenary franchise mentality, and an eclectic cast of today’s most exciting actors.

On one hand, “The Predator” is such an unapologetic appeal to the teenage delinquents who once made Shane Black the highest-paid screenwriter in Hollywood that it might as well have been called “To All the Boys I’ve Loved Before” (case in point: Keegan-Michael Key’s character communicates almost exclusively through “your mom” jokes). On the other hand, all but the best gags feel like they’ve been focus-tested to death, the nonsense plot has been ruthlessly engineered to lay the groundwork for a sequel, and the film’s half-assed efforts to reclassify cognitive disabilities as superpowers — however well-intentioned — come off as misguided at best, and dishonest at worst.

“The Predator” begins in outer space, as an alien spaceship tries to outrun the bogeys on his tail before warping into Earth’s atmosphere and crashing into the Mexican jungle (it goes without saying that this will not be the last overt nod to the original film). It’s bad timing for rugged Army Ranger Quinn McKenna (a bland, serviceable Boyd Holbrook), who’s right in the middle of trying to snipe a few drug lords. After surviving a short tussle with the dread-locked E.T. who pops out of the downed craft, Quinn salvages a bit of nifty alien technology and mails it north to America, because our country apparently doesn’t have enough problems already.

The package finds its way to Quinn’s autistic son Rory (Jacob Tremblay), who’s more comfortable with alien gadgets than he is with human beings. It’s awful to watch the bullies in the boy’s class refer to him as “ass-burger,” but fear not: Rory will have his revenge when he wears the Predator mask to go trick-or-treating, and his developmental disorder seems to magically clear up as soon as it’s no longer relevant to the story.

For better or worse, however, he’s hardly the only character in the movie to be struggling with some kind of mental issue. After Quinn is interrogated by a ruthless government operative named Will Traeger (a scene-stealing Sterling K. Brown, who finds beautiful music in lines like “they’re large, they’re fast, and fucking you up is their idea of tourism”), he’s thrown into a bus full of other “crazy” vets the Army has deemed to be liabilities. 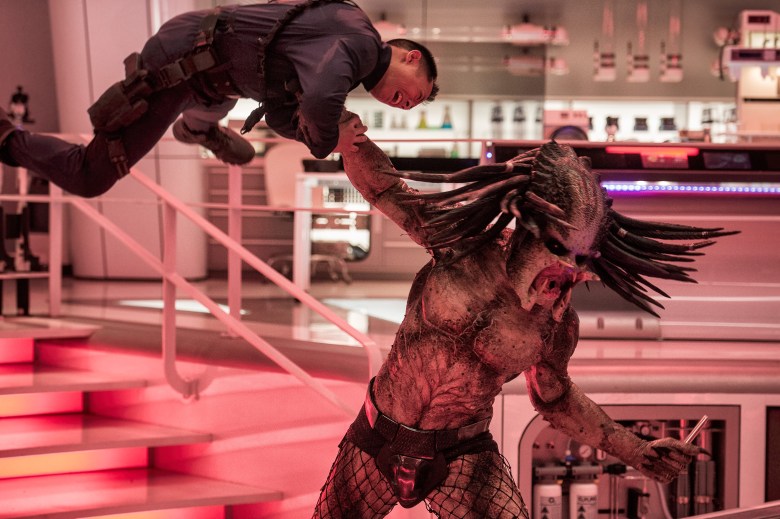 There’s something a bit off about each and every one of these violent rejects, and Black loves them for their foibles. “Moonlight” breakout Trevante Rhodes is genuinely fantastic as Nebraska Williams (birth name: “Gaylord.” Pause for laughter), an ex-marine with a penchant for self-harm. Key brings a homicidal sense of humor to the role of Coyle, while Augusto Aguilera expresses his character’s PTSD through acting really high, and Thomas Jane is saddled with a classic case of Movie Tourette’s. Alfie Allen is British.

Black’s comic instincts have never struggled to keep up with the times (“Kiss Kiss Bang Bang” inflected Raymond Chandler with a withering degree of sarcasm, while “Iron Man 3” afforded Tony Stark all of his best material), but most of the jokes here feel like they’re several decades past their expiration dates. “The Predator” bends over backwards to contort weaknesses into strengths, but there’s really no coming back from the bit where biologist Casey Bracket (Olivia Munn) deadpans that autism is actually the next step in human evolution.

It’s hard to say why Bracket, of all people, was called in for the most top-secret job in military history, but she’s pretty, she’s smart, and apparently — when she was six years old — she wrote a letter to the President expressing her interest in meeting an alien. Don’t hold your breath for Black’s script (co-written with Fred Dekker) to undercut that line with a more believable rationale, because you’ll asphyxiate and die before the scene where Bracket survives a run-in with a Predator by getting completely naked on the floor of a shower.

At least the movie doesn’t leer at her in the process. As compromised as this misbegotten project is, “The Predator” refuses to reduce its female lead to a sex object; Bracket is basically the most competent of all the characters, even if the best scenes in the film takes place after she shoots herself in the foot with a tranquilizer dart, leaving Quinn’s unit to take care of her like they’re the seven dwarfs. In fact, the only body that gets ogled here is that of the massive Predator who shows up to chase the runaway we met in the prologue, the camera drinking up every slimy inch of this towering extra-terrestrial Adonis.

Apparently, these killer space invaders are injecting themselves with the strongest DNA they can find as part of a ruthless bid to keep getting stronger and conquer new worlds. It’s an under-explained process that Black’s film hopes to replicate for itself, as it builds on the franchise’s core genetic sequence with bits that it borrows from Marvel, “Alien,” and whatever else Black can slip into its bloodstream.

The result is a tedious ordeal that strains towards a deeper story that it never bothers to flesh out, and winks at a pre-existing mythology that it only thinks of as fan service. Yes, someone says “get to the chopper.” No, it’s not amusing. Yes, someone references alien visits in 1987, 1997, and alludes to the fact that they’ve started to occur more frequently (okay, that dig against the “Alien vs. Predator” movies is actually kinda funny). No, those hints of self-reflexivity never take hold.

Despite a handful of ingenious kills, “The Predator” doesn’t feel like a throwback that’s stitching the past into the present — it feels like a confused and desperate reboot that’s totally lost in time. For a film about celebrating the things that make people different, it’s a shame that Shane Black’s latest studio offering feels like it could have been made by committee, and that it probably was.

“The Predator” premiered at the Toronto International Film Festival. 20th Century Fox will release it in theaters on September 14.

This Article is related to: Film and tagged Reviews, Shane Black, The Predator, TIFF