Tribeca TV: From a storytelling approach that turns the fourth wall into rubble to the legitimately bizarre characters involved, the upcoming Nat Geo docudrama promises to be a wild ride. 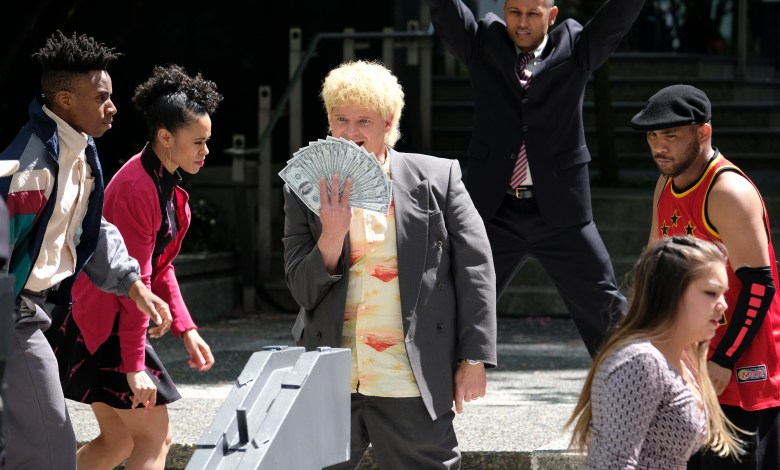 Steve Zahn in “Valley of the Boom.”

The story of how the rise of the Internet changed the world is an important one, but it can also be a little dry. That’s why creator Matthew Carnahan, when tackling the subject for the upcoming Nat Geo series “Valley of the Boom,” decided to have some fun with it.

“I’m interested in the subject matter, but not that interested,” he explained during a panel at the Tribeca TV festival. In the two episodes of the series screened, the story of three rising companies during the 1990s tech boom is told with documentary interviews, scripted reenactments, fourth wall breaks, interpretative dance, and a rap battle. “I just like to play with that stuff, always, and the prankster-ism of the piece is all in service of bringing the audience in on the fun, rather than it being this dry observational experience.”

Joined by cast members Bradley Whitford, Steve Zahn, and Lamorne Morris, as well as real-life participant Stephan Paternot, the conversation revolved significantly about not just the technology of the era being depicted, but how technology functions in our lives today.

For example, when asked how people today might try to regain the sense of in-person connection that could be considered missing today, Paternot responded that “I’ve been getting that question more often, and it took this show to make me realize that everything about the utopia I and everyone then had in our heads has been warped.”

“This world we’re living in has been very recently transformed and it scares me and it excites me,” added Whitford. “We live in the information age — it would be better if we lived in the wisdom age.”

Paternot, who appears in the show via talking head interviews and is also played in the scripted sequences by actor Dakota Shapiro, was the co-founder of TheGlobe.com, an early social network that predated Facebook by several years. He now runs the online film finance marketplace Slated, and said that he was initially impressed by the thoroughness of the interview process… then was surprised to learn that there would be a scripted portion — after friends in the entertainment industry there was a casting call out there for someone named “Stephan Paternot.”

Watching Shapiro play him for the first time, he said, was “an out-of-body experience… I had to sleep on it for a day or two.” But once he came to terms with it, he got caught up in the episodes, because “I want to know what happens next.”

Carnahan said that the writing process for the show included first drafts where the documentary portions of the script were simply fiction: “It was a bit of a clusterfuck… We just had to make up the interviews and hope Jim Barksdale says something like this.”

Also a major factor was the fact that while many of the people whose stories are told by the series are still alive, their participation wasn’t guaranteed. Netscape co-founder and venture capitalist Marc Andreessen, for example, is played by John Karna in the show, but the real Andreessen does not appear on camera.

Executive producer Arianna Huffington did try to convince him to participate, but the message Carnahan ultimately received from Andreessen was that “the two things I hate most are talking about the past and having people look at me — so why would I do this?”

However, Carnahan said, “Apparently we have [his] blessing.”

Another real-life figure who doesn’t appear as himself is Michael Fenne, the character played by Steve Zahn. “This character was insane,” Zahn said of the moment when he was approached with the role. “I couldn’t wait to read more scripts — couldn’t wait to find out what happened.”

With bleached blond hair, a huge personality, and clearly devious tendencies, Fenne is a wild figure in the series, and Carnahan did speak to him during the development of the show. However, when it came time to film his interviews, they weren’t able to get him on camera.

“He is not happy about this,” Carnahan said. “He had convinced himself of a different reality and started seeing the real reality and it was very confronting for him. We haven’t heard from him since.”

Paternot, meanwhile, is happy with what he’s seen so far from the series, especially given the questions it raises about today.

“It’s humbling and flattering and I’m really glad,” he said of the fact that “Valley of the Boom” was telling TheGlobe.com’s story. “We’ve come so far, and I’d completely forgotten how much things have changed.”

“Valley of the Boom” will premiere in January 2019 on Nat Geo. The Tribeca TV festival runs September 20-23 in New York.

This Article is related to: Television and tagged Matthew Carnahan, Tribeca TV, Valley of the Boom