In just 10 minutes, show creator Jed Mercurio will lay claim to the next six hours of your life. 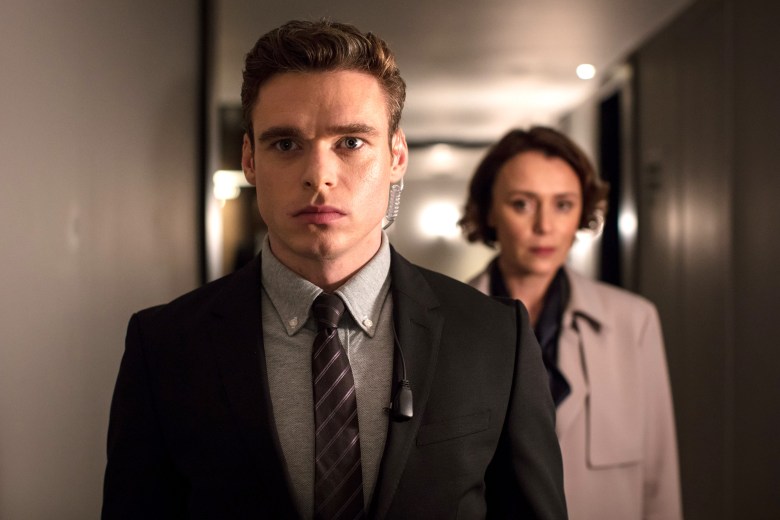 Political conspiracy thriller “Bodyguard” is Britain’s biggest TV hit in years, and it’s easy to see why. With Jed Mercurio’s suspenseful story and mesmerizing performances by Richard Madden and Keeley Hawes, it’s an intoxicating and addictive television cocktail. Ten minutes in, and viewers will want to binge all six hours of the new Netflix-distributed series that examines how the London corridors of power grapple with the increased threat of terrorism.

This is not a remake of the 1992 Whitney Houston-Kevin Costner thriller “The Bodyguard,” although it does feature a hardened private security specialist David Budd (Madden) assigned to protect a high-profile woman, who in this case is the implacable Home Secretary Julia Montague (Hawes). Both are accustomed to taking charge and forge a wary professional alliance that eventually crosses into the personal.

Madden is already an international star after playing the ill-fated Robb Stark on “Game of Thrones,” the dashing Prince Charming in Disney’s live-action “Cinderella” reboot, and the irresistible EDM deejay in Netflix’s “Ibiza.” Even so, this is his most thrilling role to date and does much to bolster his name as a possible Bond successor to Daniel Craig.

Part action hero, part brooding Heathcliff, Budd is a man whose skills for detection and defense have been honed by war. He also exhibits a remarkable humanity, such as in an early sequence involving a suicide bomber. Madden bristles with tightly reined tension, but in an instant can act with brutal efficiency or horrifying desperation to reveal cloaked PTSD. The strength of Madden’s commanding stare — at a faulty cell phone, or a quote during a news conference — invests viewers in minutiae. He puts the same barely leashed control into his speech. Ever proper, Budd loves the word “ma’am,” which would seem comical if it weren’t for his nuanced delivery that makes every monosyllabic address feel like a full, impassioned sentence. 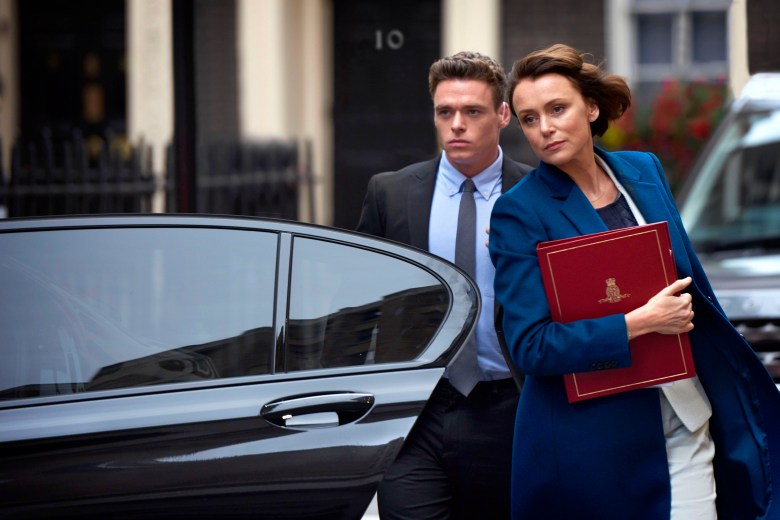 Hawes, whose extensive TV resume includes starring in Mercurio’s “Line of Duty” and the charming family drama “The Durrells in Corfu,” is more than his match as a politician whose outspoken nature and policy of increased surveillance make her a target. She plays Julia as calculated yet confident, a woman who does not suffer fools or fragile male egos. Together, Madden and Hawes are electric; if the series were just a two-hander, their chemistry would be more than enough to keep watching. Thomas Vincent (“Versailles”) directed the first half of the series, which exponentially ratchets up the couple’s relationship. Nothing seems as important as their interactions, which rarely need dialogue to smolder.

And yet, deceit, violence, government machinations, and terrorist plots dare to intrude. Those familiar with Mercurio’s acclaimed and ongoing police procedural “Line of Duty” (four seasons are currently available on Hulu) have tasted his brand of insidious, widespread corruption. Here, a broad network of government agents and other political players offer a range of suspects for the rampant malfeasance. No one can be trusted — Julia and David included.

Careening from white-knuckled action sequences to excruciating moments of drawn-out suspense, the show is relentless in creating visceral reactions through the tension. Mercurio is bold enough to kill off characters, creating real stakes that don’t guarantee anyone’s safety, and throws in plenty of plot twists to keep viewers unsteady. Part of the fun is it doesn’t really matter if the audience can figure out who is behind which plot; it’s all about the way it unravels.

It’s almost a shame that Netflix won’t release the show according to the UK’s weekly rollout. Not only does Mercurio excel at crafting clever cliffhangers that should be savored, but a break also would allow viewers the chance to digest the events, build anticipation, and perhaps ward off stress ulcers.

The series finishes with an appropriately twisty ending that even the most perceptive viewers won’t predict; in that regard, Mercurio is successful in his narrative mastery. However, the choices he makes in order to create this surprise, and how he reveals it, are problematic. This takes viewers out of the moment and weakens what should be a satisfying cap to an engrossing series.

This Article is related to: Television and tagged Bodyguard, Netflix, TV Reviews