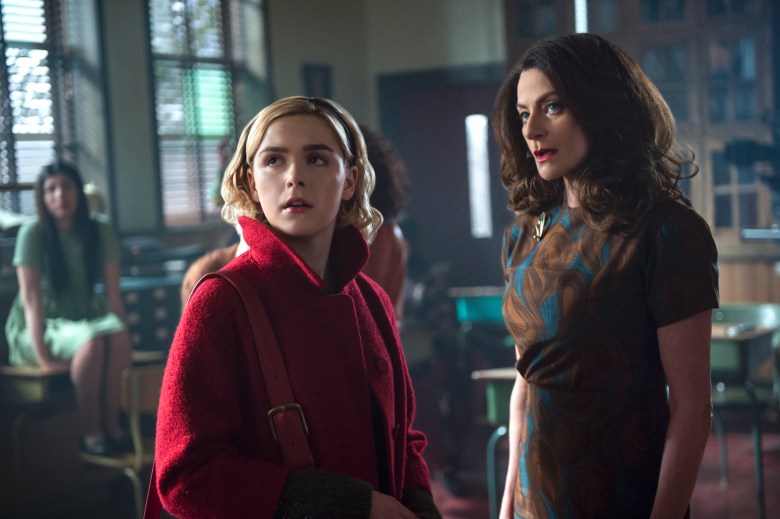 [Editor’s Note: The following contains spoilers from “Chilling Adventures of Sabrina” Season 1, including its finale. For a spoiler-free discussion, read IndieWire’s review.]

In the season finale of “Chilling Adventures of Sabrina,” Kiernan Shipka’s titular character fully embraced her witch half and signed her soul away to the devil, further complicating her already unusual relationship with death. “Without spoiling anything in Season 2, there’s a lot of mourning of her mortality,” said Shipka.

It’s a bittersweet look ahead for the character, who was reimagined by Roberto Aguirre-Sacasa from Archie Comics’ “Sabrina the Teenage Witch.” The new incarnation had been touched by death from the start; Sabrina Spellman never knew her parents because they died in an accident when she was an infant. Also, she resides in a house that doubles as a mortuary operated by her witch aunts and cousin.

“There’s a very mortal poignance that Roberto brings to the death elements of the show and comes at it from a very human perspective,” Shipka said. “It is interesting playing a character that doesn’t really grow up with those kinds of experiences. But at the same time, Sabrina is mourning the loss of her parents from the beginning. That’s a constant in her mind and her everyday life. There’s a loss there that is ever present.”

As the offspring of a mortal and a witch, Sabrina was always destined to forge her own path. Although she initially defied her coven by refusing to sign the Dark Lord’s book when the show began, her resolve crumbled when a hellish scourge threatened to claim the lives of all the firstborns in Greendale, including her friends. As a result, her already potent witch’s powers were amplified and her lifespan extended since witches age more slowly than mortals do. 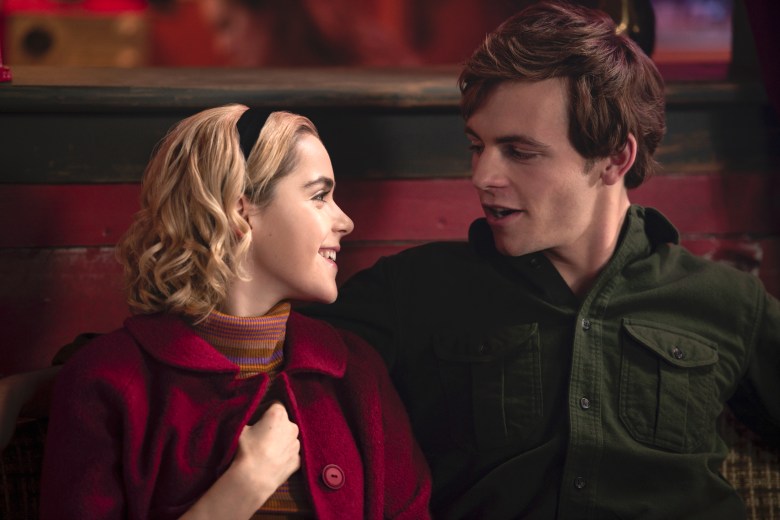 Of course, the downside is that Sabrina must obey Satan’s will, should he choose to call on her. She also sacrifices something else that the other witches and warlocks had not: the mortal half of herself. She no longer feels the urgency that shorter-lived people do, but she’ll also have to attend the Academy of Unseen Arts, leaving her mortal boyfriend Harvey (Ross Lynch) and friends behind.

Sabrina didn’t come to her fateful decision alone. She was spurred on by her teacher Mrs. Wardwell (Michelle Gomez), who revealed her true identity to one hapless mortal in the finale: “I’m the mother of demons, the dawn of doom, Satan’s concubine. I’m Lilith, dear boy, first wife to Adam, saved from despair by a fallen angel. I call myself Madam Satan in his honor.” While grooming Sabrina to choose darkness would eventually earn Madam Satan a crown and throne by the Dark Lord’s side, her actions also have a disruptive, feminist bent. “Women are taught to fear power. Own it,” she tells Sabrina.

Gomez said, “There’s a ‘bring down the patriarchy’ resonance there. And so Madam Satan stands for that female empowerment and to really encourage and push Sabrina to be the most powerful version of herself. What does that mean to the modern woman today with the choices that we have?”

Could agreeing to serve the devil be a stealth way of taking down the patriarchy from within? Madam Satan certainly doesn’t lack for ambition, and Sabrina’s Aunt Zelda (Miranda Otto) also makes a critical, game-changing decision in the finale. Of Sabrina’s two aunts, Zelda had always been a devout member of the Church of Night and even had a good relationship — an affair, actually — with the High Priest, Father Blackwood (Richard Coyle). However, when she serves as midwife to Lady Blackwood, who dies in childbirth, she claims only one twin, a son, survived.

She lied. A daughter had been born first, but Zelda stole her away “to protect the babe… She’s a girl born before her brother, and the High Priest, I fear what he would’ve done to her.” 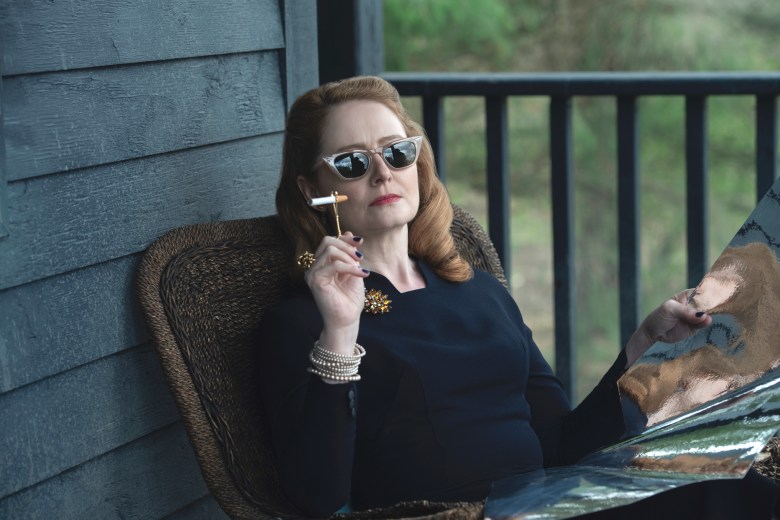 Otto said, “I think she has her own very private doubts about certain things and the way certain things go. I see her as a bit of a politician. She’s in it for the long haul, she’s playing the long game and she’s fiercely protective of Sabrina. She does really feel that, as a half witch, if she’s not in the coven, then she’s in a very dangerous position.

“So to her, the only position to take is to be within the Church and to do what you can within that. As much as Zelda berates Sabrina and is tough on her, I think she actually really admires her strength and tenacity and rebelliousness. There’s a part of her that sees Sabrina one day heading up the Church in some way.”

Season 2, which is already shooting in Vancouver, sounds like it’s ripe for revolution. Shipka dropped one hint about Sabrina’s plight: “I was in a rehearsal the other day for a scene that’s in the second season. I end up laying down, I see a bunch of people looking over me, and in the rehearsal, I was like, ‘This is a shot from “Rosemary’s Baby.” I know I’m supposed to be passed out right now, but oh my god.’ So it continues.”

This Article is related to: Television and tagged Chilling Adventures of Sabrina, Kiernan Shipka, Netflix