Jack Black's got nothing on Carly Beth. 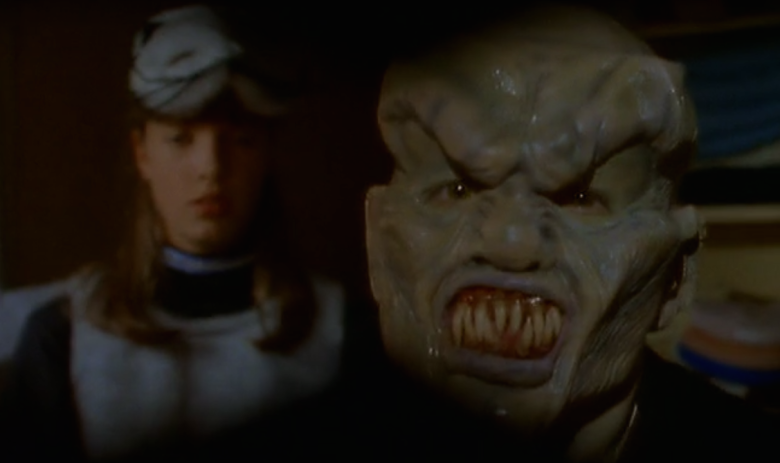 The ’90s were a blessed time for spooky-not-scary TV for kids. Following the same anthology format that resonated with viewers of “The Twilight Zone” and “Alfred Hitchcock Presents,” Nickelodeon introduced “Are You Afraid of the Dark?” to the inaugural edition of its Saturday night SNICK lineup in August of 1992. That same summer also saw the premiere of R.L. Stine’s “Goosebumps” series, whose 231 books have sold more than 400 million copies in 32 different languages and spawned a movie franchise that continues with this weekend’s “Goosebumps 2: Haunted Halloween” (is there any other kind?).

It also resulted in a largely forgotten television adaptation that, like much else of its era, lives fondly in the hearts of millennials who face an uphill battle when trying to justify their love of it to anyone else. Most episodes of the hour-long show, each of which is based on one of Stine’s books, weren’t especially scary even at the time and certainly aren’t now — which is part of the charm.

More faithful to its source material than most literary adaptations, the “Goosebumps” show (which debuted in 1995 and aired 74 episodes during its four-season run) strikes the same balance between humor and horror that made its source material such a hit.

There’s one notable exception. The scariest thing the “Goosebumps” franchise has ever produced — other than the books’ covers, many of which are truly great — is the pilot episode. Based on the eleventh book in Stine’s series, “The Haunted Mask” follows mild-mannered Carly Beth Caldwell (Kathryn Long), an 11-year-old whose acute fear for pretty much everything makes her a target for schoolyard bullies in the lead-up to Halloween.

“I don’t like being scared. I don’t like being afraid, OK? Maybe someday they’ll know how it feels,” she says of the two boys who’ve made a habit of frightening her. This comes to a head when they put a worm in her sandwich, erupting in laughter alongside the rest of their classmates after she nearly bites into it; Carly Beth leaves school in tears and destroys the “cute” duck costume her mom made her, determined to be a victim no longer.

“Last thing I wanna be on Halloween is cute,” she says of the feathered outfit. “I wanna be scary this time.” And so she does what any reasonable 11-year-old would do in such a situation: visits the creepy novelty store that seems to have sprung up on the edge of town overnight and, after being told by an enigmatic shopkeeper that the grotesque mask she wants to buy isn’t for sale, decides to run off with it. (She tries to return it when the reality of what she’s done sets in, but the door closes behind her before she can.)

At first the changes are subtle. Carly Beth’s voice is a bit raspier when she dons the mask — think Christian Bale’s Batman — and hiding her true self behind a monstrous visage brings out a confidence she never knew she had. She completes her transformation by carrying around an equally creepy mask of her own face as though it were a severed head on a pike: “Oh, it’s me,” she explains to her visibly concerned friend. “It’s who I used to be.”

Carly Beth has but one goal for All Hallows’ Eve: to scare her two main tormentors. Around the time she crosses that off her list with ease, the situation becomes complicated. Our heroine takes a little too much pleasure in her revenge, appearing to lose herself to the mask’s influence during a number of sudden outbursts, but the real horror begins when she tries to remove it. The seams have disappeared at some point during the night, fusing into Carly Beth’s skin in a way that makes it impossible to tell where she ends and the mask begins, and she has a terrifying realization when she looks into the mirror: She doesn’t even recognize her eyes.

It’s like the end of “Rosemary’s Baby” for the preteen set, a moment of utter dread as it dawns on Carly Beth that this transformation may be permanent. It doesn’t, of course — like most “Goosebumps” tales, this one has a happy ending — but the sheer terror in Carly Beth’s voice as she ponders her fate is enough to make you a believer, however briefly.

“The Haunted Mask” has developed something of a cult following in the two decades since it first aired, with video essays and general consensus pointing to it as the best episode of the “Goosebumps” series. (It was popular then, too: 14.1 million viewers tuned in to the original Fox broadcast, and more than 2.5 million copies of the VHS tape were sold the following year.) It’s clear from the first Jack Black–starring movie and its sequel that the franchise is more interested in making audiences laugh than scream, but let it be known that it still has the potential to give you, well, goosebumps.

“Goosebumps: The Haunted Mask” is available to stream on Netflix.

This Article is related to: Television and tagged Goosebumps, Goosebumps 2: Haunted Halloween