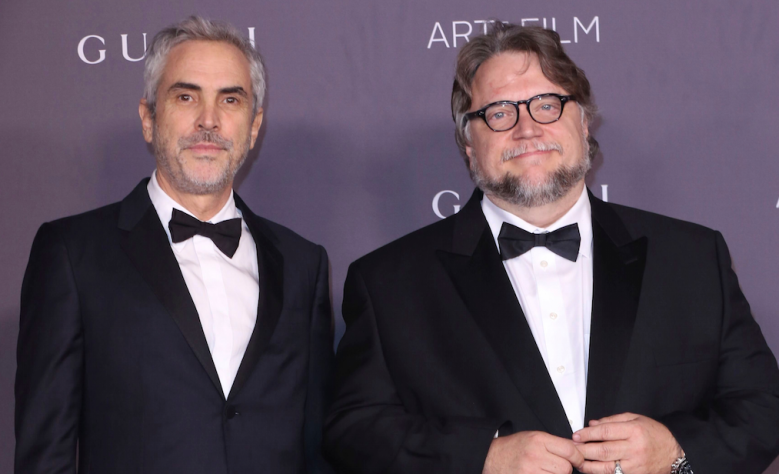 Guillermo del Toro made a surprise appearance at the 56th New York Film Festival to introduce “Roma,” the critically-acclaimed drama from his friend and fellow director Alfonso Cuarón. Del Toro served as the jury president of the Venice Film Festival earlier this year and awarded “Roma” the event’s most prestigious honor, the Golden Lion. Del Toro’s “The Shape of Water” won the same prize last year and went on to win Oscars for best picture and best director.

“‘Roma’ is, for me, the culmination of Alfonso’s career so far,” del Toro told the NYFF audience. “When I first saw the movie, I said to him, ‘This is not only your best movie, it’s one of my top five movies of all time. But don’t get big-headed: it’s number five.”

“Roma” is set in Mexico City during the 1970s and follows a year in the life of a domestic worker who cares for an upper middle-class family. Cuarón has repeatedly shared that the film is based on the memories of his own childhood growing up in Mexico City, which is part of the reason del Toro regards “Roma” so highly.

“At its highest function, cinema is memory,” del Toro said of the film’s power. “It tells us things that we remember, but never happened to us. We live them like experiences.”

“Roma” followed its Venice win with more acclaim at Telluride, Toronto, and NYFF, where its first screening earned a huge standing ovation. The film is being viewed by many as Netflix’s strongest Oscar contender and it could find itself breaking out of the foreign language race to score nominations for best picture and best director, among others. The movie is Cuarón’s first release since Oscar winner “Gravity.”

Netflix will make “Roma” available in theaters and on its streaming platform December 14.

A surprise intro at ROMA from @RealGDT! “ROMA is the culmination of @alfonsocuaron‘s career so far.” I told him, ‘This not only your best movie, it’s one of my top 5 movies of all-time. Don’t get big-headed. It’s number five.’” #NYFF pic.twitter.com/WHQmywLF4Y

“At its highest function, cinema is memory. It tells us things that we remember, but never happened to us. We live them like experiences.” – @RealGDT on the power of @ROMACuaron #NYFF pic.twitter.com/u7z36upfrF

Thank you for introducing ROMA, Memo! By all accounts, and not surprisingly, your introduction was way better than mine! @RealGDT https://t.co/edRHgQEhZ5