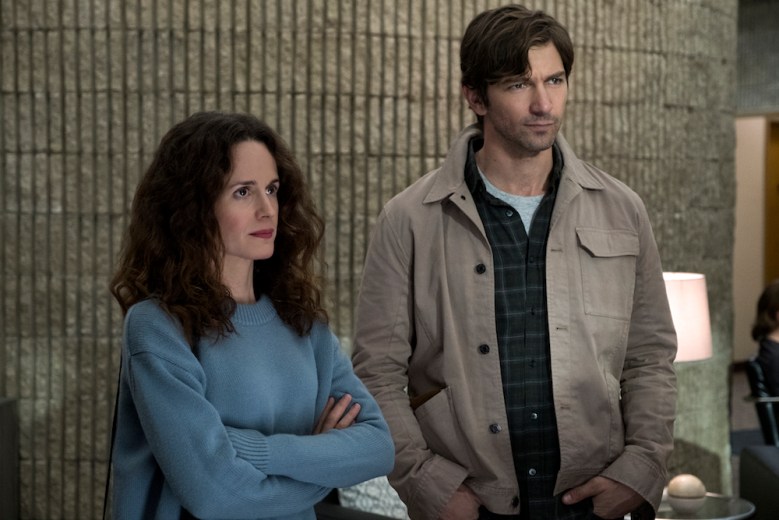 Elizabeth Reaser and Michiel Huisman in “The Haunting of Hill House”

“The Haunting of Hill House” works best when it breaks from the clichéd trappings of the haunted house genre and embraces the innovation needed to bring this story to television. On the one hand, there’s a lot of familiarity about this serialized horror show: It’s set in a humungous 100-year-old mansion filled with creaking floors, self-opening doors, and lots of ghosts; a sprawling cast endures various inexplicable events. But despite these familiar tropes, the able-bodied actors eventually draw out a provocative, emotionally resonant story; moreover, showrunner Mike Flanagan infuses enough fresh tricks to make the overall experience a treat worth savoring through Halloween.

Based on Shirley Jackson’s 1959 novel of the same name, the Netflix original series takes place over two time periods: “then” and “now,” as the title cards so simply put it. “Then” is at least a few decades ago, shortly after the Crain family moves into the titular Hill House in order to flip it. Papa bear Hugh Crain (Henry Thomas) is a bit of a man of all trades who can fix pretty much anything. His wife, Olivia (Carla Gugino), is the architect who can read plans and make them. They’ve got not three, not four, but five kids ranging between acceptable bed-wetters and “too old for that stuff.”

“Now” picks up with the children grown, the father distanced, and the mother gone. Steven (Michel Huisman), the oldest, has written a work of fiction inspired by his family’s real time at the house. Nell (Victoria Pedretti) is struggling from hallucinations and nightmares, while Luke (Oliver Jackson-Cohen) is in and out of rehab and Theo (Kate Siegel) is struggling with long-term relationships. But the most intriguing grown-up of the group is Shirley (Elizabeth Reaser), who’s married and the co-owner of a mortuary. She’s the mortician, which provides quite a few opportunities for dead bodies (or their spirits) to behave badly. 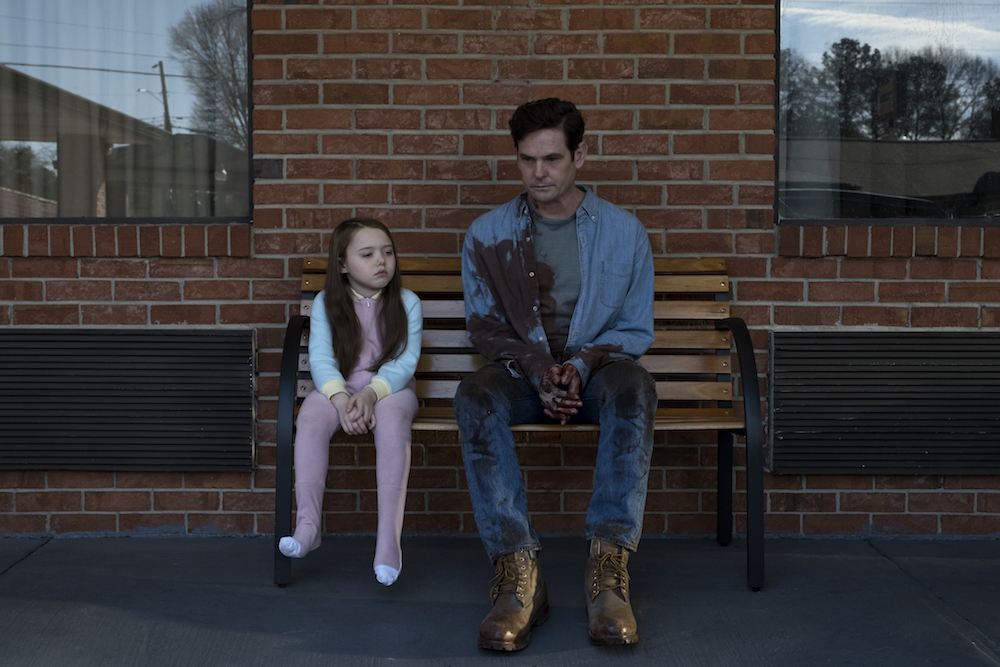 Violet Mcgraw and Henry Thomas in “The Haunting of Hill House”

What happened at the house — and what sent this tight-knit family spinning away from each other — is withheld for most of the first season. Backstory is teased slowly, as the series tries to balance out its family drama with the scares implied by its source material. Early on, while secrets are still being preserved, “The Haunting of Hill House” leans too heavily on easy jump scares and prolonged build-ups.

These familiar gimmicks can be tiresome in a two-hour movie; in a 10-hour series, they’re exhausting. An excessive number of scenes are drawn out to the same frustrating results, and each one ends the same way: After building up anticipation as long as possible, a ghost pops out, drops in, or suddenly appears in the audience’s line of sight, unbeknownst to the living. Rinse, repeat.

Thankfully, it’s not simple boredom driving viewers to skip ahead. “The Haunting of Hill House” builds characters so well that finding out their mysterious backstories is far more engrossing than watching them get freaked out. The flashback structure is also a hindrance in this regard, since it confirms who’s alive and who’s dead and deprives life-or-death scenes of their suspense. But the device is integral to the series overall, and ultimately works to its advantage. 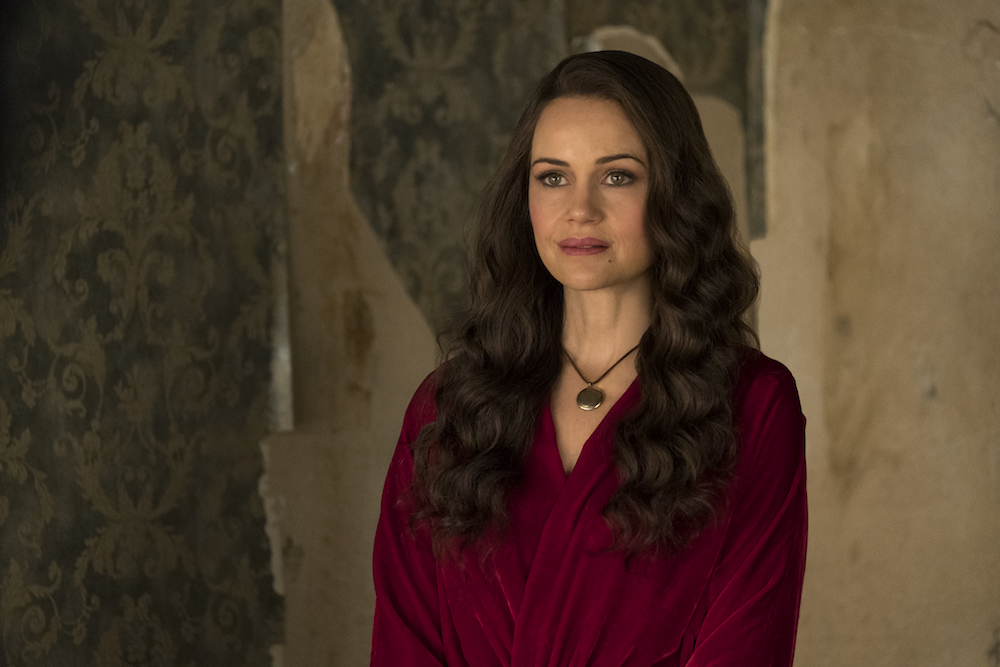 Carla Gugino in “The Haunting of Hill House”

For one, it provides answers most horror movies can’t — aka, what happens to the people who survive a haunted house? Most films don’t have time to examine the psychological consequences for the victims who escape with their lives; their lives are reward enough. But “Hill House” understands what advantage its extra time provides and shows what happens to the kids after their traumatic childhood. They have to revisit their past to find closure, so instead of their escape from the house being the climax, it’s the mystery. Viewers know they get out, but they don’t know how, they don’t know what happened, and they don’t know where they end up once they have to deal with the house all over again as adults.

Beyond an insightful screenplay structure, Flanagan — who directs every episode — finds an accessible yet eerie tone. The director of “Gerald’s Game” and festival favorite “Oculus” is currently shooting the sequel to “The Shining,” “Doctor Sleep,” and anyone anticipating that entry should find encouragement in the look and feel of “Hill House.” Flanagan doles out his best work behind the camera during two stunning back-to-back long takes to cap Episode 6. While not all that elaborate (compared to recent examples), they exhibit all of “Hill House’s” best qualities. The sheer length of the takes highlight the strong performances, while the production design (including the massive set constructed for the house itself) is top-notch from the standing sets to when they’re smashed, torn, or shattered. Even the telegraphed scares are well-timed, and there are few extra crafty surprises, too.

For better and worse, “The Haunting of Hill House” has all the trademarks of a Netflix original. It’s bloated, but ambitious; it’s exposition-heavy, but has a high enough budget to indulge beautiful creative flourishes. It’s familiar enough to appeal by comparison (for fans of tense haunted house staples like “The Conjuring,” “Hell House,” or “The Others”), but it’s different from a lot of modern television horror out there. (“American Horror Story” this is not — there’s no camp to be seen, nor do the frights focus on the grotesque or gory).

Ultimately, when “Hill House” treats its story like a movie, it suffers — and when it embraces the benefits of television, it thrives. Luckily, it is a TV show, and thus its builders knew how much story they had to tell and find a creepy groove after a few hours. Haunted house stories work for a reason: They take something comforting — the presumed safety of a private dwelling — and turn it against you. “The Haunting of Hill House” follows that pattern, but its real potential lies in breaking the mold more than reapplying it. It’s the people who haunt viewers more than the ghosts, and emphasizing the stories of the living is what makes Netflix’s horror show come alive.

“The Haunting of Hill House” is streaming now on Netflix.

This Article is related to: Television and tagged Netflix, The Haunting of Hill House, TV Reviews