Gerard Butler's lifeless submarine thriller is so dull that you'll be praying for a geostorm to show up and blow everyone off the screen. 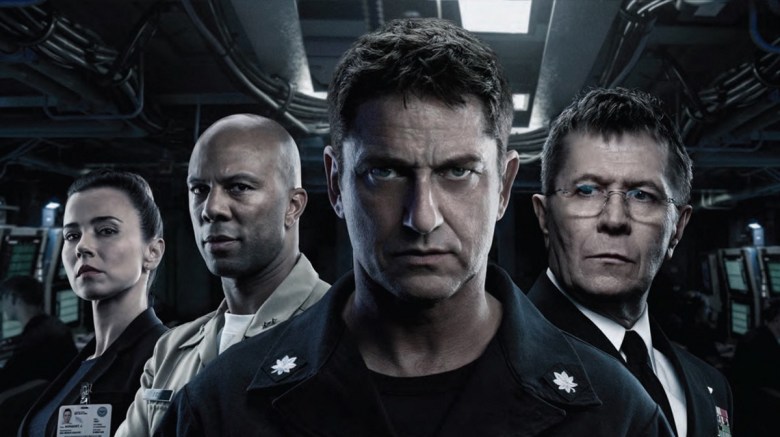 “If it doesn’t suck, we don’t do it.” That’s one of the only memorable lines of dialogue from the latest of Gerard Butler’s impressively bland action vehicles, but at this point it might as well be the inscription on a plaque that’s mounted behind his agent’s desk. Between “London Has Fallen,” “Geostorm,” and “Den of Thieves” — all real movies, this critic is tragically able to confirm — it’s beginning to seem as if the rugged Scotsman is just waiting by Nicolas Cage’s mailbox and stealing all of the most boring scripts before he can read them. On the plus side, that would leave Cage no choice but to continue starring in wildly eccentric fare like “Mandy.” On the minus side, it might result in Butler hosting a lot more press conferences at the Pentagon, where — in keeping with current custom — the actor recently fielded questions about what it’s like to pretend to serve the American people.

Truth be told, it’s hard to imagine that shooting a third-rate Tom Clancy knockoff like “Hunter Killer” has endowed Butler with any sort of authority on attack submarines; while the film’s brief fits of underwater action are undeniably tense (and seem to be informed by a well-researched degree of realism), those sequences are adrift in a ridiculous story, and torpedoed by ultra-forgettable characters. Adapted from a 2012 novel called “Firing Point,” and more than a little out of step with the carnival-esque politics of today’s global climate, the story begins with an effective sting of intrigue: A U.S. military sub is playing hide-and-seek with a Russian vessel somewhere near the Arctic Circle when the latter suddenly explodes without warning. The Americans don’t have time to figure out what happened before they’re blown out of the water as well.

Watching from the peanut gallery some 5,000 miles away in the Pentagon, hawkish Admiral Charles Donnegan (Gary Oldman, in a pre-Oscar paycheck role) and the more level-headed Rear Admiral John Fisk (Common, who can’t have spent more than six hours on that set) have no choice but to brace for World War III. When Oldman drops a couple of Alka-Seltzer tablets into a glass of water, you know shit just got real.

Enter Joe Glass (Butler), a hunter killer in his own right who’s ordered to steer a crew towards the wreckage and see what they can find. He’s introduced stalking a buck across the wilderness with a bow and arrow, but the grizzled submarine commander doesn’t have the heart to shoot the animal in front of its family. Don’t hold your breath for Joe’s merciful nature to resurface later on, as screenwriters Jamie Moss and Arne L. Schmidt appear to have forgotten about it by the next scene, when their transparent protagonist is redefined as a rogue vet who plays by his own rules. Nevertheless, that’s more than enough to make Joe the most complex character in “Hunter Killer,” the entire supporting cast of which can effectively be divided into “sweaty young sailors,” “Russian who are totally evil,” “Russians who might not be totally evil,” and Linda Cardellini (playing an NSA agent whose only lines are variations of “I’m from the NSA!”).

The plot thickens when Joe’s submarine arrives at the scene of the crime and is immediately targeted by a Russian vessel that’s hiding just beneath the ice. The why of it all is best left for audiences to discover for themselves, but rest assured that the enemy aggression has less to do with the United States than it does a Russian military coup involving a Bond villain (Michael Gor), a “Mission: Impossible” villain (the late Michael Nyqvist, who may still appear in Terrence Malick’s “Radegund”), and the weak Prime Minister caught between them (Alexander Diachenko as President Zakarin).

While there are, combined, exactly zero interesting things about any of these characters, they might inspire bored audiences to wander down some interesting mental side streets as they zone out. Chief among them: The viability of broadscale political thrillers at a time when the evening news is more captivating and absurd than anything you’d ever be able to find in the pages of an airport novel. “Hunter Killer” isn’t all that absorbing to begin with, but the spell is completely broken every time the film cuts to its female U.S. President, or its fictional Russian PM (which is made even more jarring by the fact that Indiana Jones nemesis and Putin lookalike Igor Jijikine plays one of his disloyal henchmen). This isn’t a criticism of the movie, per se, but it doesn’t lend any credence to a story that already hinges on the benevolence of world leaders, and the nefariousness of the deep state that churns beneath them. Even if Joe’s submarine is state-of-the art (it sure is a lot roomier than the claustrophobic movie subs of yore), and even if the film speaks fluent U.S. military lingo, the whole thing might as well be a period piece, or take place in an alternate universe.

And yet, given how exciting it can be whenever Joe’s submarine exchanges fire — director Donovan Marsh fails to put much of a unique visual stamp on “Hunter Killer,” but the maritime action is shot with clarity, and filled with moody shots of subs emerging from gray clouds of debris — it’s a shame the whole thing doesn’t take place underwater. On the contrary, the film devotes an entire parallel narrative to the meathead team of marines who airdrop into Russia and try to rescue the Prime Minister from the generals who are holding him hostage.

“I don’t know shit about politics,” one of them boasts while cocking his rifle. Every frame of this hoo-rah hogwash is a waste of time, as Marsh severely overestimates how much fun it might be to watch four generic beardos reenact cut-scenes from the “Goldeneye” video game. At least the sets look nice.

This turgid side-plot eventually overlaps with Joe’s storyline, but much of “Hunter Killer” feels like watching an interminable mash-up between two unrelated movies that someone bought off the rack at a gas station. If only Marsh were as determined to broker a peace between those two parts as Joe is between the film’s two warring governments, then perhaps there might be any momentum behind this waterlogged bore. Even among Gerard Butler vehicles, this one sinks right to the bottom.

Lionsgate will release “Hunter Killer” in theaters on Friday, October 26.