Hill can run, but he can't hide from his "Superbad" days — in part because they helped him find his way as a filmmaker. 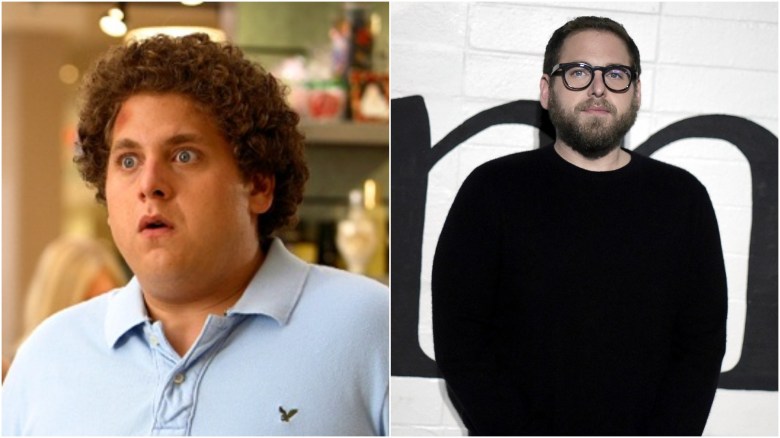 In promoting his directorial debut, “Mid90s,” a sweet, perceptive look at teen skateboarders in the titular era, Jonah Hill has spent a lot of time explaining himself. He’s touched on the 20 drafts he wrote over four years to craft a passion project that draws from the nostalgia of his youth, and why his skateboarding movie is “the anti-‘Kids,'” but more than that, a lot of people keep asking him about his comedy roots.

He’s endured this several times before, with each of his Oscar-nominated performances (in “The Wolf of Wall Street” and “Moneyball”), and it kicked off again this fall. A dramatic New York magazine cover story presented Hill in a grave black-and-white portrait, with the actor casting a provocative gaze at the camera under the dramatic headline: “Jonah Hill, filmmaker.”

Indeed. That transition comes out of careful brand management that, to date, yielded mixed results. Hill has morphed into a trim, bearded, and bespectacled movie buff who wouldn’t look out of place at Film Forum, but that hasn’t changed public memory. As he engaged in a day of interviews at “Mid90s” distributor A24’s offices in Manhattan, a publicist sat with him in the room and listened closely. “When I was an actor, I had to fight to break out of certain boxes,” he said. “If you want to be a filmmaker and you’re an actor, that’s a giant box to step out of. I don’t really let people tell me what I’m supposed to be. You can’t control people’s expectations. Every time I’m settled in one space, I kind of just bail.” 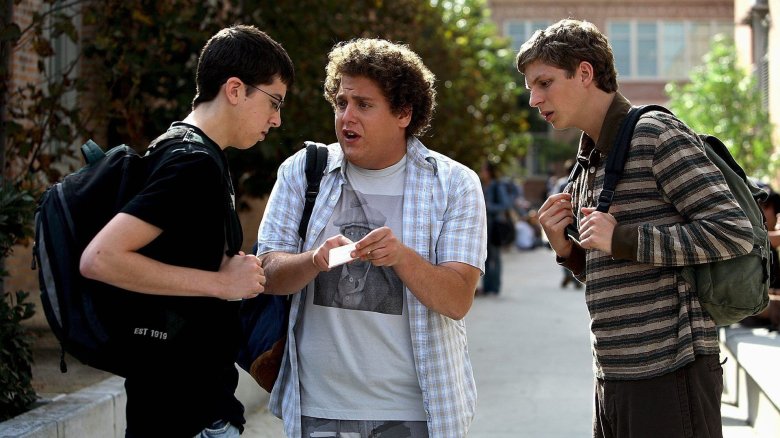 Yet no matter how many times Hill bails, he’s still remembered as Seth from “Superbad,” the pudgy, foul-mouthed wannabe party boy opposite a bumbling Michael Cera more than a decade ago. Hill can run from those early days, but he can’t hide — in part because they set him on his eventual path to become a filmmaker. Long before he scored a four-hour advisement session from Martin Scorsese or asked Ethan Coen for first-time filmmaking tips, “Superbad” director Greg Mottola noticed that Hill wanted make movies.

“Jonah has real artistic ambition, which is different from career ambition,” said Mottola, who watched an early cut of “Mid90s” and provided Hill with feedback. “He could be very successful sticking to comedy, but he wouldn’t be happy with that. I think he needs to do work that is deeply interesting and challenging to him.”

Mottola was surprised by the outcome of Hill’s directorial debut. “I knew Jonah wanted to write and direct, but I didn’t necessarily expect ‘Mid90s,’” he said. “I really admire it a lot. The performances Jonah got from those kids are fantastic, and I love the you-are-there naturalism to it, the way things play out with the rhythms of real life. I think that tone is what surprised me the most. It takes a lot of nerve to commit to that kind of realism.” 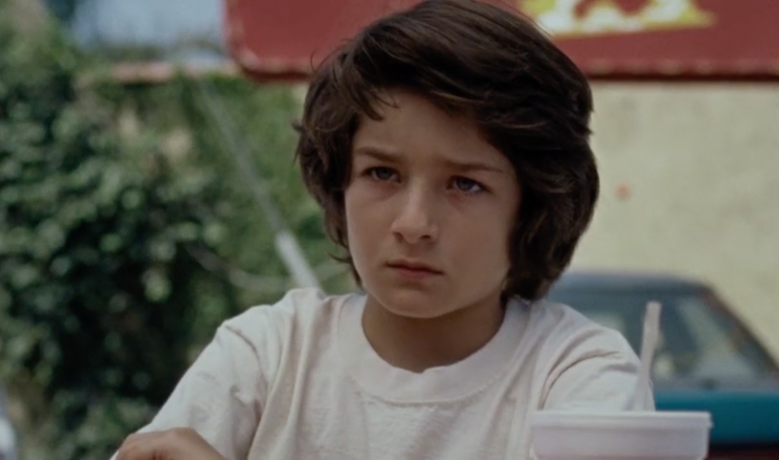 Hill’s “Superbad” experience set the stage for “Mid90s” in several ways, some more visible than others: He first met his assistant director, Scott Robertson, on the set of that production. Working with Mottola provided Hill with one of the experiences he references when he has said, in several interviews, that “having an acting career is like a front-row seat in film school.”

The movies also share thematic details: They both revolve around a klutzy, hormone-stricken kid flubbing his way into a hip older crowd with awkward results that oscillate from comedy to poignance at unexpected moments. And like “Mid90s,” the movie pushes beyond formula with performances that elevate the genre through sheer credibility.

Watching “Superbad” through 2018 eyes, Hill’s performance is alive in ways that often aren’t appreciated alongside cheerful memories of McLovin taking a joyride in a cop car. No matter its goofier connotations, “Superbad” remains a vibrant cinematic embodiment of the party-boy genre that stemmed from Mottola’s roots beyond the studio arena — his breakout, the ensemble dramedy “Daytrippers,” won Slamdance — and that relationship helped establish a template for the young Hill to consider his own filmmaking ambition with “Mid90s.”

“The movie’s very funny, of course, but similar to Jonah’s performance in ‘Superbad,’ we see this boy stumbling through the clueless world of male bravado, desperately longing for admiration,” Mottola said. “But the thing of real value that he finds is a more intimate kind of acceptance, the kind he can’t get from his family life.” Mottola saw the link between two movies in “brash, crude, outrageous personalities that cover for wounded and tender hearts.”

Hill came of age as a cinephile in the period his movie takes place, and many of his influences stem from the eruption of American filmmaking that were taking place beyond Hollywood. He spent a lot of time browsing Blockbuster Video and cable channels in his youth, where he fell for the complex cringe-comedy of Todd Solondz’s “Welcome to the Dollhouse” and John Waters’ “Pecker.” Even as his profile expanded, he kept his eye on projects beyond the studio world. He recognizes that most people will see “Mid90s” as an homage to “Kids,” but asked his cast of non-professional actors to watch Shane Meadows’ “This Is England” to prepare for the shoot.

“I only showed it to them to show them how naturalistic child performances could be in the film,” he said. “I wanted them to feel safe and understanding to give that naturalistic of a performance so they don’t have to quote-unquote act, or be super gestural, and I love how Shane Meadows got those performances out of those kids.”

Hill has the right idea “Mid90s” calling “an anti-‘Kids,’” but it may be more accurate to call it an optimistic remix. Hill consulted with “Kids” screenwriter Harmony Korine on the project, and gave Korine a fleeting cameo as one of the many anonymous suitors who passes through Stevie’s house to visit his single mother (Kathryn Waterston). “My experience with skateboarding was so much more positive than ‘Kids,’” Hill said. “There’s so much love there.”

His movie bears that out: While the ensemble of “Kids” scream and party their way through a gritty New York scene that ultimately sees several characters contract AIDS, the older skaters in “Mid90s” become Stevie’s warm-hearted gurus on the bumpy road to young adulthood. “People are just lazy,” Hill said of the constant “Kids” comparisons.

Hill emailed Scott Rudin’s production office out of the blue in 2015 with his first draft of the script. “Sometimes, you meet someone about a script and they just disappear,” said Rudin’s producing partner, Eli Bush. “With Jonah, you’d tell him something, and he’d come back with a new draft. We talked to him all the time. As someone who had another career, it was clear he’d cleared the deck and wanted to work his ass off.”

Bush emphasized thath Hill’s blossoming storytelling sensibilities were hidden in plain sight. “I think he’s made gradual contributions to things over the years,” Bush said, noting that while Hill anchored the box-office hit “21 Jump Street” with co-star Channing Tatum, Hill also had a story and producing credit on the movie. “People underestimate what he brought to that,” Bush said.

And Hill does acknowledge his comedy roots, if only to place them in context. He cited Mike Nichols and Barry Levinson as his heroes. “These are people who started in comedy and went on to have amazing filmmaking careers,” he said. “You only get one shot at a first film. If you look at their first films, they really just come from a meaningful, personal place. So that’s why I just took the time to understand my own voice and make sure it meant something to me.”

So far, that determination has paid off. Critics have been respectful, if not outright reverential, toward “Mid90s,” and the movie scored a solid opening in four theaters. It’s a far cry from the scale of a studio release, or the outrageous enthusiasm of an overnight breakout, and that may be the exactly what a first-time filmmaker needs to evade outsized expectations for whatever he might do next. Hill hasn’t figured that out yet, though clearly the auteur-in-training role sits better with him than fronting for other people’s projects.

For the most part, he avoided the promotional circuit for Netflix’s “Maniac.” (Netflix’s Cary Fukunaga-directed sci-fi thriller, where he co-stars alongside Emma Stone, hit the streaming platform a month before “Mid90s” came out.) Aside from a few voiceover gigs, his next move remains unclear. He’s been watching a lot of documentaries (most recently, the Gilda Radner portrait “Love, Gilda” and “Three Identical Strangers”) but has yet to figure out what a sophomore feature might look like.

Put on the spot, he dodged the question on cue. “I don’t know what’s next,” he said. “I just hope anything I do can get across the feelings and tone that I can make.” His collaborators are waiting for word.

“I know he’s got stuff in mind,” said Bush. “He’s been writing and thinking.” Bush emphasized Hill’s calculation. “Jonah is the opposite of the underdog, because of his success at a young age, but he became who is because he works hard, he’s really smart, and he’s really ambitious,” he said. “There’s something about working with people who are young and experienced is very interesting — but there’s zero rhyme or reason to it.”

“Mid90s” is now playing in New York and Los Angeles. It expands to national markets this week.

This Article is related to: Film and tagged A24, Jonah Hill, Mid90s, Superbad