The Amazon alternate reality drama plays with big ideas, but in a dangerous way. 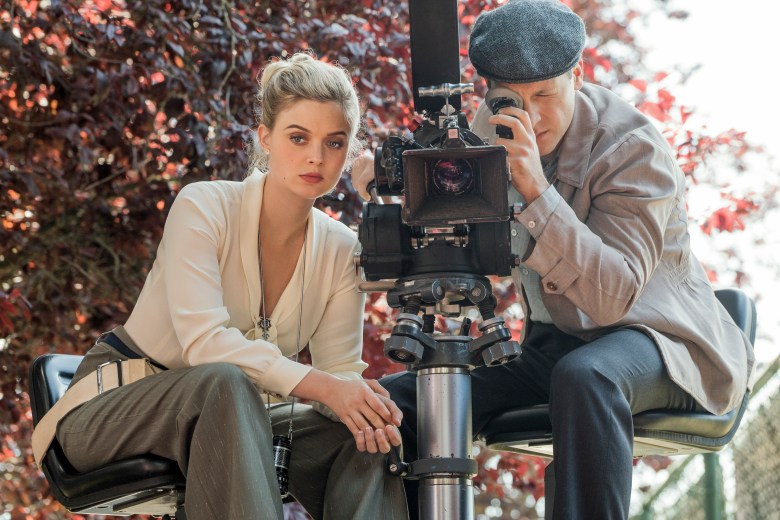 From the beginning, “The Man in the High Castle” has always been a bummer of a show. A series about an alternate reality in which the Axis won World War II, it presents a bleak and grey society guided by hatred, and in its third season, the series continues to explore not only the “what if,” but also a far bigger idea: there are other alternate realities in the world, ones that offer more hope than the one ruled by fascism.

As established by past seasons, “The Man in the High Castle” is set in a version of the 1960s ruled by Nazis and the still-brutal Japanese Empire, where the dream of American liberty is all but dead. Being Jewish is punishable by death, censorship is a way of life, and the only real sign of hope lies with the mysterious film reels hoarded by the titular dude in a high palace, known as Hawthorne Abendsen (Stephen Root). Our hero Juliana Crain (Alexa Davalos) wants to use these reels to understand, perhaps even escape from, this current reality — but shifting through these worlds isn’t so easy, as her sometimes-ally Trade Minister Nobusuke Tagomi (Cary-Hiroyuki Tagawa), is all too aware.

The show has had an unpredictable release strategy since its January 2015 premiere; original showrunner Frank Spotnitz left the series midway through Season 2, leaving the series without an “official” showrunner, and the new season didn’t end up airing until December 2016 (notably after the 2016 election). For Season 3, Eric Overmeyer was named as official showrunner, and these 10 episodes feel far more centered as a whole, with the same impeccable production values as ever. 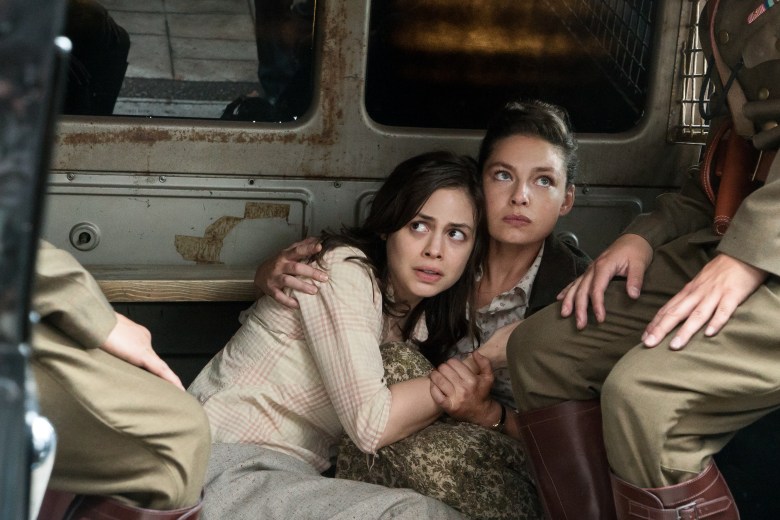 However, now that the show has a clearer voice, what it’s saying is troubling. The power of iconography has always been powerful for “The Man in the High Castle.” It’s explicit in not just in Julianna’s use of the newsreels from other realms, but in continued appearances of Nicole Dörmer (Bella Heathcote), who was introduced last season as the next coming of Leni Riefenstahl and in Season 3 is fully committed to spreading the Reich’s narratives, even while living a lifestyle that falls outside Party-approved lines.

This is a hard time for a show like “The Man in the High Castle” to be releasing a new season. It’s a show about a universe where, if a person who doesn’t adhere to the “good and pure Aryan way of life,” they are casually eliminated as a matter of due course by the authorities. That doesn’t feel like sci-fi, doesn’t feel like an alternate reality; the only part outside the bounds of today is that these prejudices are explicit, not implicit. Those who hate feel empowered to say it out loud, and in “High Castle,” they’re protected by government law. 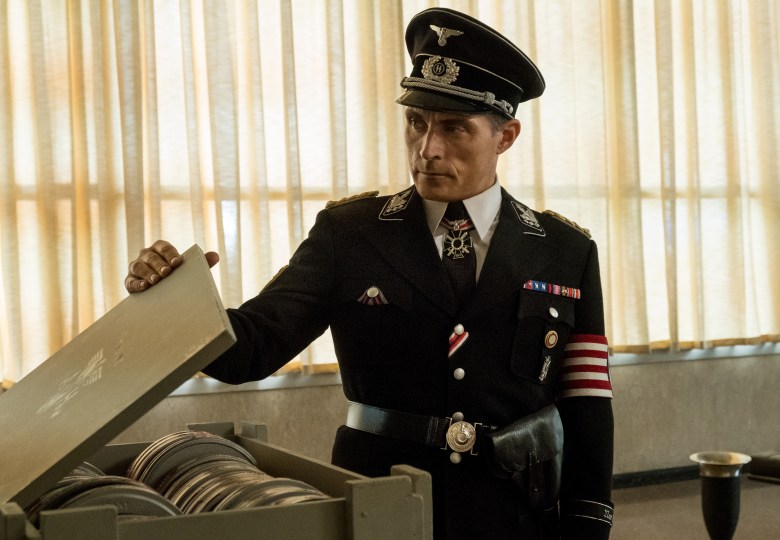 More than one episode features previously sympathetic characters delivering speeches about the virtues of fascism, about the necessity of purging the weak and inferior for the greater glory of society. These scenes don’t happen in a vacuum; there are other characters who react against these concepts, even if in the most subtle of ways.

It’s not that “High Castle” would benefit from a more optimistic tone. This is a portrait of a thoroughly defeated society; maybe even for the victors, which is perhaps the show’s best critique against fascism. There’s a lot of lip service to the glories of the Reich, but in many ways the show reminds us that a suppressed person is never happy.

This reflects only a few of the storylines; “High Castle” has always been an ensemble with a lot going on, and Season 3 is almost impossibly sprawling. (Speaking of alternate universes, it’s possible to imagine a version of this show pared down just a few degrees that would be significantly more accessible.)

But perhaps one of the consequences would be losing the much-increased presence of LGBTQ characters (albeit ones living in fear and secrecy). At least two separate couples have storylines that make sense within this world order, and prove truly powerful. 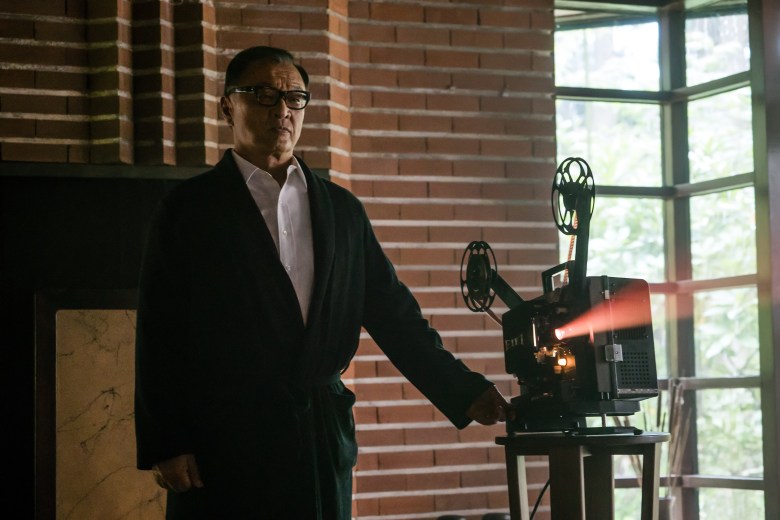 This cast has always proven itself serviceable, with Tagawa, Heathcote, and Davalos always proving impressive, and new addition Jason O’Mara makes the most of an interesting arc. Rufus Sewell particularly deserves consideration, as the ongoing journey of rising American Reich officer John Smith is one of the show’s backbones. The heartbreaking dilemma presented to Smith in Season 2 — kill his genetically inferior son Thomas per Reich law, or be labeled a traitor — was one of the season’s most compelling aspects, and its repercussions in Season 3 offer up the sort of fascinating family drama not seen elsewhere.

In general, “High Castle” presents ideas never seen in other shows. The premise requires some engagement with sci-fi tropes, and it’s to this season’s credit that the crazy, almost Terry Gilliam-esque aspects of shifting through realities amplify with some spectacularly realized moments. The only issue is that they feel out of line with the gritty world previously presented; any viewer of Syfy’s “12 Monkeys” has watched people blip in and out of various realities, but “High Castle” has always presented itself with an extra level of realism. Nazis aren’t cartoon characters; they are killing children in front of us.

In Season 3 there are moments of joy, moments of hope, but in the long run it’s a show about unchecked hatred that doesn’t offer much in the way of solutions, because maybe it knows there aren’t any. It doesn’t destroy the idea that action is ineffective. It even offers its characters some moments of triumph. But it also doesn’t pretend that the path to rebellion is easy, and that average people are able to find it.

The best hope it offers, in this season, is literally escape to another reality. This is not a good show for the hopeless, who often turn to TV for that very thing.

This Article is related to: Television and tagged Amazon, The Man In The High Castle, TV Reviews