Sacha Gervasi's firsthand account of the "Fantasy Island" star's tragic life is another antihero story without anything relevant to say. 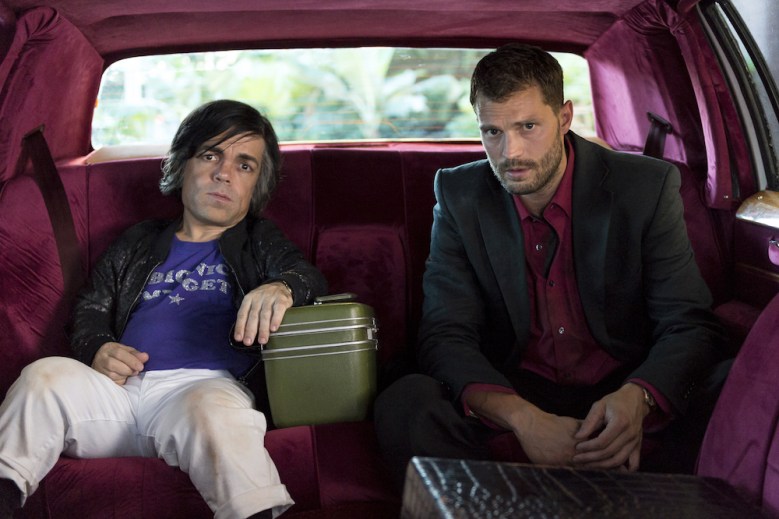 Peter Dinklage and Jamie Dornan in “My Dinner With Hervé”

Hervé Villechaize, the artist best known for playing Nick Nack in “The Man With the Golden Gun” and Tattoo on the TV show “Fantasy Island,” may have been a decent man. With just a rudimentary bit of research, one can see that Villechaize worked extensively with troubled children, helping abuse victims cope with tragedy and speaking with depressed teenagers about suicide. Certainly as a performer, the famous dwarf knew how to entertain the masses, even going so far as to play Oscar the Grouch on “Sesame Street.”

To its credit, “My Dinner With Hervé” doesn’t embellish these details to create an overly rosy interpretation of a troubled man. But to its pressing detriment, the new HBO biopic downplays any empathetic characteristics whatsoever, to the point where viewers may wonder why this actor was notable at all. Sure, he was famous for a spell, but in a movie that damns celebrity as much as it glorifies it, his notoriety can’t be the only reason to watch.

Sacha Gervasi’s film never reconciles that question. A messy story forced to fit inside a familiar biopic template, Gervasi and Dinklage’s long-in-the-works passion project doesn’t connect the dots between action and consequence. People do bad things and don’t learn from them, or they do learn, but it’s unclear how. Instead of coherence, let alone fun, the film offers up a few spot-on recreations of Villechaize’s most famous scenes (and co-stars) while aimlessly telling two stories connected by one fateful dinner. 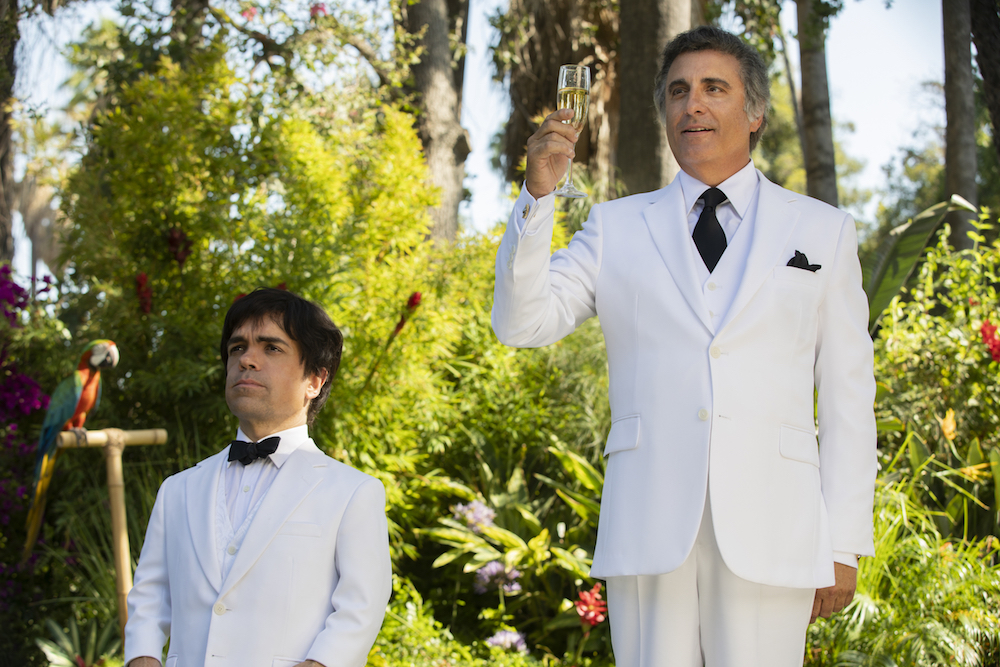 Peter Dinklage and Andy Garcia in “My Dinner with Herve”

There’s Hervé, of course, but then there’s also Danny Tate, a fictionalized reporter who serves as a stand-in for Gervasi himself (who interviewed Villechaize shortly before his death). From the brief, blunt introduction given to Tate, it’s clear from his jittery demeanor and intermittent heat sweats he’s a recovering alcoholic, just as it’s obvious he’s a man of the ’90s by his unforgivably baggy suits and horrific choice in ties. Though it’s made known he did something bad enough to a) put himself on the wagon, and b) lose his wife and child, “My Dinner With Hervé” holds back what he did until near the end of the movie. [Spoiler alert: It’s the most obvious explanation you can think of.]

His drinking also nearly costs him his job, but his ball-busting editor gives him one final shot at redemption: Get on a plane to Los Angeles and interview Gore Vidal. His titular dinner with Hervé is an afterthought — a fun “where they are now” piece timed to the 20th anniversary of the actor’s onscreen battle with Bond.

From there, the film adopts your classic “as told to” story structure. Hervé tells Danny about his life, and his flashbacks are intermittently interrupted by random, real-time shenanigans — like dropping by a strip club or commandeering a limousine. One problem with cutting back-and-forth like this is there’s not enough separation between who Hervé was then and who he is today. In the past, you’ll see him chase his terrified wife through their yard, gun in hand. In the present, he’s crumpling up $10 bills and tossing them gleefully at naked dancers. Before, he’d show up to set in a drunken stupor and cost his “Fantasy Island” crew (including an angelic Ricardo Montalbán, played by Andy Garcia) hours of daylight and thousands of dollars. Now, he’s double-fisting drinks in the hope Danny hops off the wagon and joins him, ruining his sobriety and costing him any shot of reuniting with his family, not to mention keeping his job. 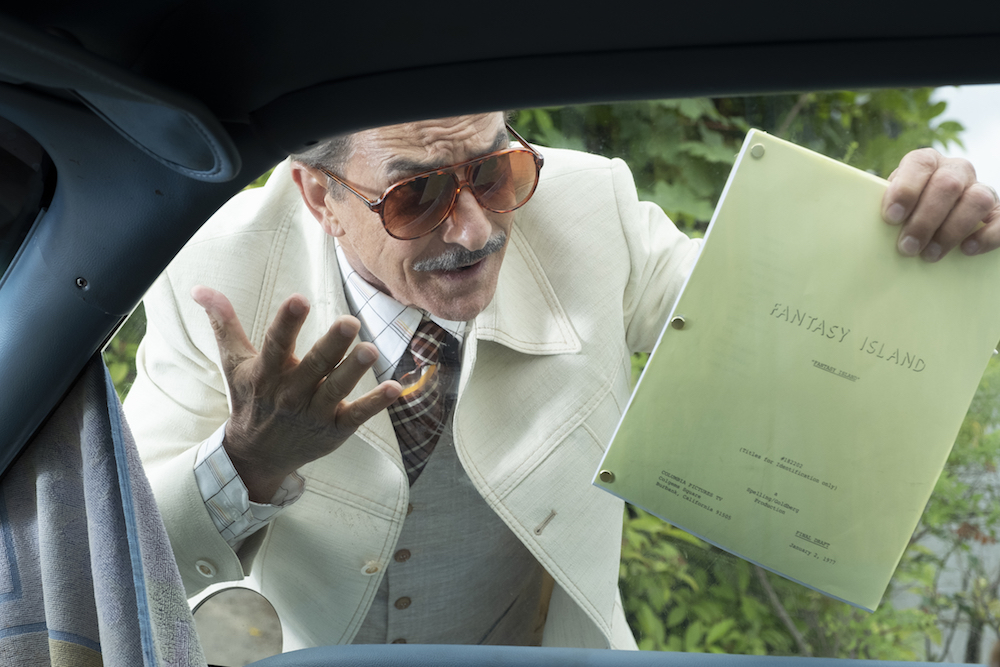 David Strathairn in “My Dinner With Hervé”

“My Dinner With Hervé” expects empathy far more than it earns it. Despite a disturbing childhood — where Hervé’s father put him through life-risking surgeries in the vain hope adult organs would help him grow taller — any sympathy for the lead runs out when his rare challenges are pushed aside for another toxic celebrity story; it wasn’t his parents who screwed him up, it was Hollywood! Only later do the two sympathy sources connect, and by then it’s too little, too late. Worse yet, after Hervé is intended to have his come-to-Jesus moment, he throws it all away so he can…sound…cool?

It’s unclear what, exactly, motivates Hervé’s final line, but it’s certainly operating on the same fuzzy wavelength as Danny’s incentives. Sure, he wants his family back, but much of his behavior can’t be blamed on the alcohol or the withdrawals. At best, he’s a blank slate the audience may have a hard time ignoring. At worst, he’s a bossy ex-boyfriend and a pretty bad reporter whose realization of as much feels unearned, and thus, impermanent.

Dornan exudes more range than he has in the past, but that’s like praising a sleeping cat for stretching — there’s still not a lot demanded from him. Dinklage, meanwhile, deserves praise for consistently capturing a tricky accent and grounding a pretty nasty character in enough charisma to make him tolerable. Not even a “Station Agent”–level turn could turn this harsh look at Villechaize empathetic, but Dinklage does what he can amid many tonal problems, some of the most nonsensical dialogue outside of congressional hearings, and Gervasi’s flat framings. (There’s not a lot of formal courageousness here, and shots that include a writer typing the title of the movie at the end of the movie show Gervasi isn’t trying to forge a fresh style.)

“My Dinner With Hervé” exists because two people shared a passion for the story they either lived through (Gervasi) or were inspired by (Dinklage). Unfortunately, so little of whatever sparked their persistent interest makes it to the screen. What’s left are two dudes with varying degrees of moral disrepair shouting at each other across the Hollywood Hills. That’s not enough to hold up an entire feature, or even a good dinner conversation.

This Article is related to: Television and tagged HBO, My Dinner With Hervé, TV Reviews