Roseanne Barr had earlier spoiled the details behind how "Roseanne" would be killed — and it turns out she was right. 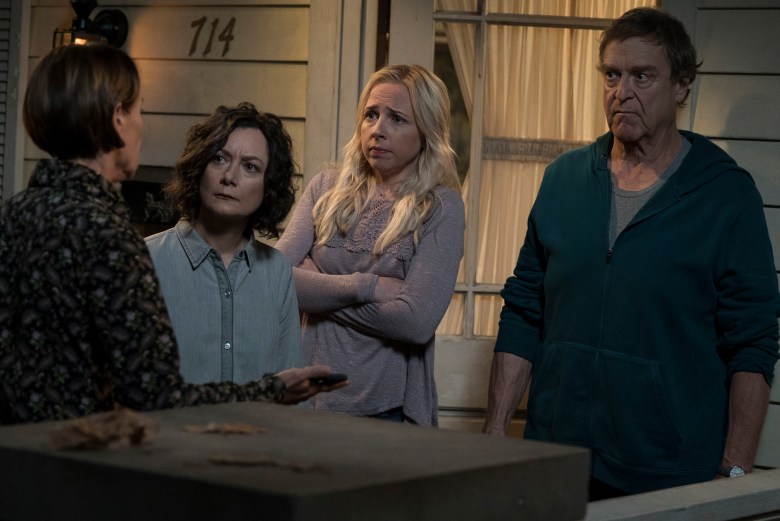 [Warning: If you can’t tell by the headline above, spoilers follow.]

It can finally be shared: As revealed in the first episode of ABC’s “The Conners,” Roseanne Conner died from an overdose of opioids. Of course, the news didn’t come as a surprise to anyone who follows social media, as disgraced star Roseanne Barr herself revealed the storyline on YouTube during an interview in September.

ABC hid the character’s fate, utilizing it as a marketing hook to convince viewers to tune into “The Conners” premiere Tuesday night. But even before Barr revealed how her character would die, star John Goodman had already let slip, in a late August interview with the Sunday Times, that Roseanne Conner’s absence would be explained by killing her off.

The death isn’t out of step with the direction “Roseanne” headed this spring. The revival series had begun to tackle the nation’s opioid crisis by showing Roseanne collecting and hiding others’ medicines, and taking more than what was prescribed for her. In the season finale, Roseanne was about to undergo knee surgery.

Barr wasn’t thrilled with the storyline (unsurprisingly, given her unhappiness over being fired): “It wasn’t enough to [fire me], they had to so cruelly insult the people who loved that family and that show,” she said on the YouTube video.

“The Conners” opens three weeks after Roseanne’s funeral. In the kitchen, as they eat casseroles dropped off by their neighbors, Darlene (Sara Gilbert) thanks Aunt Jackie (Laurie Metcalf) for pitching in around the house.

“Roseanne would want me to step in and watch over the family,” Jackie says — to which her 92-year-old mother Beverly (Estelle Parsons) replies, “No, it would kill her! But she’s already dead, so carry on.”

D.J.’s wife Geena (Maya Lynne Robinson) then pops up, on a five-day family leave, and their daughter Mary (Jayden Rose) reveals the cause of Roseanne’s death: “If you don’t eat right, your heart can attack you like Granny Rose!”

But that was a misdirect: The coroner’s office reveals, via Roseanne’s autopsy, that it wasn’t a heart attack at all: She overdosed on opioids. 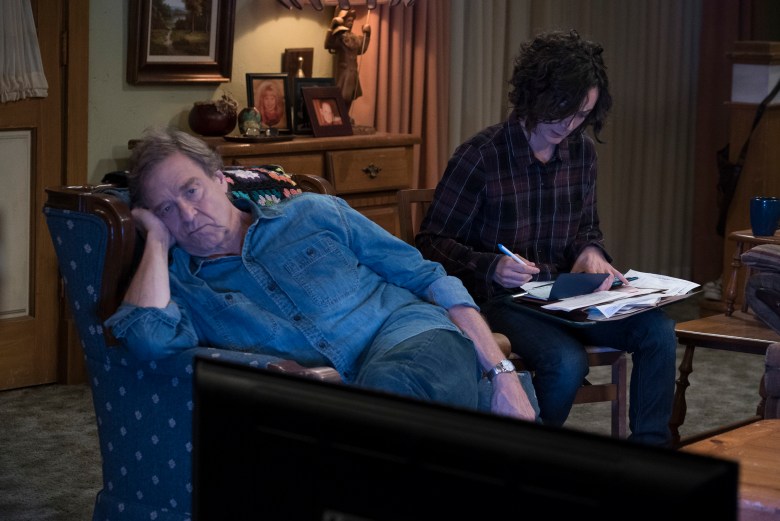 “That’s not possible,” Dan (Goodman) says. “We knew she had a problem. She was only on pain pills two days after surgery. Then it was just ibuprofen.”

The coroner’s office, however, believes that Roseanne took additional pills before bed, and with her health issues, it was enough to stop her breathing.

“It doesn’t make any sense. I got her knees fixed, I flushed all her pills,” Dan says. Becky (Lecy Goranson), however, reveals that she found pills in her mom’s closet — not even prescribed to her.

The pills are actually prescribed to Marcy Bellinger (guest star Mary Steenburgen), and Dan retaliates by driving around town with a sign on his truck blaming her for Roseanne’s death. Later, Marcy comes to the Conners’ house and pleads for him to take the sign down.

“I have to live with this for the rest of my life, is that enough for you?” she asks. “No one can afford their meds, so we all have each other. Rosey needed painkillers, I had some, so I gave them to her… you can judge, but Roseanne called me. She said she needed those pain pills to go back to work.”

Their anger toward Marcy subsides, however, when they discover Roseanne had been hiding more pills from multiple people around the house.

“I wish I had known,” Darlene says. Replies Dan (echoing the sentiment toward the real Roseanne Barr, who had been warned to stay off social media before writing the racist Twitter post that got her fired): “It wouldn’t have mattered, she was going to do what she was going to do. She never listened to a damn person in her life.”

The episode ended with the new “Conners” opening, which parrots the familiar “Roseanne” opening of the family gathering around the kitchen table. This time, however, it’s Dan and Darlene at the center, and Roseanne nowhere in sight.

Meanwhile, ABC has shifted the run order for the “Conners” episodes. “Tangled Up in the Blue,” which features the return of David (Johnny Galecki) and his girlfriend Blue (guest star Juliette Lewis), plus introduces Darlene’s new love interest (Justin Long), will now air as Episode 2 next Tuesday, Oct. 23. (The show was originally slated as episode 4, to run in November.)

Roseanne is also briefly mentioned in that episode, but as life goes on, so do the Conners.