The "SNL" writers fail to make the best use of the "Crazy Rich Asians" star's talents. 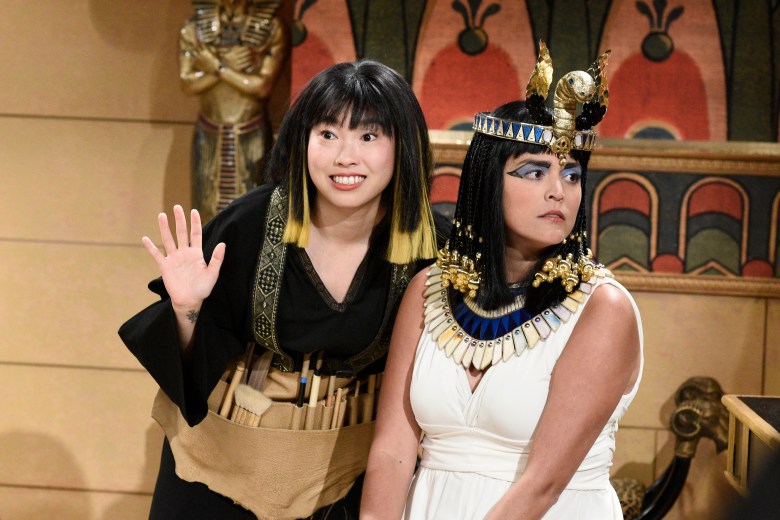 Would you look at that? “Saturday Night Live” is trying its hand with a first-time host, and one who’s not quite a household name yet. It seems like only yesterday Awkwafina was being featured on Comedy Central’s storytelling/singing series, “The Comedy Jam.” In fact, it was actually last year (on the same season as a post-“SNL” Jon Rudnitsky), and she sang Linkin Park’s “In The End” with Chester Bennington.

While not lacking in the jokes department, Awkwafina has one of the sweetest, most earnest opening monologues in recent memory. Her story about waiting outside of 30 Rock — as she didn’t have “SNL” tickets — in 2000 because her idol Lucy Liu was hosting really tugged on the heartstrings, especially since it’s even more painful that it took 18 years for another female Asian-American host to show up.

It’s an honest moment, one that makes you excited to see how Awkwafina’s voice will be heard throughout the episode. And then the rest of the episode happens. At least we get a “too late to dress as a bottle of water”’ joke out of it.

It’s nearly impossible to find anything close to whole episodes of certain “SNL” episodes of certain eras — at least, legally — even more so when these episodes originally have sketches with music clearance issues. With that, you’d probably either forget or never know about certain sketches, which makes it easier to just do them over again years after the fact. Like 14 years after the fact, if you can remember Christina Aguilera’s 2004 hosting gig. This is essentially a weaker, more recent version of that sketch, going for a less legally difficult music situation (surely it’s easier to get the rights to the Family Feud theme — especially when you do so many sketches featuring it already —than it is to get the rights to Lisa Stanfield’s “Been Around The World”). It even reuses the wack hood name joke too, with the only major difference here being that only one dance crew is bad (despite the fact they win), instead of both. The bad dancing is funny, but again, it was funnier the first time (which Kenan was also a part of, by the way).

The baby shower sketch is something that “SNL” has done plenty of times before, but you wouldn’t be able to tell the way it all goes down. The sketch itself can’t seem to decide who the terrible characters are, and that really hurts it. Is it Cecily Strong’s Carrie, who can’t seem to find any inner strength? Is it her friends, who laugh at the idea of her having a boyfriend, despite her having the “best personality” and being the “cutest one”? Is it Awkwafina’s DiDi, who comes into a stranger’s house with plate-less pizza but does her best to make the terrible friends treat Carrie better? There’s an intense lack of focus in this episode, and this sketch is the ultimate example of that. (There’s also just some weird camera work.)

While there’s probably a more fun sketch in uncovering the lives of Awkwafina and Kenan’s hype people for Ted Cruz — the moment of deflation at that reveal really is a beautiful moment though — this sketch is more about piling on the general lameness that is Ted Cruz. Even when he just tries so hard and people are actively trying to support him—just so lame. And so awkward, which is the name of the game for this sketch.

“The Pumpkin Patch” can also be described as “awkward,” but really just… How do you handle a sketch about sex with pumpkins on top of all the constant sexual assault talk in the world and this show? A sketch like this should be a reprieve from real world insanity, but instead it weirdly piles on to it. It also makes an “American Pie” reference in 2018, despite the teens who are currently discovering “SNL” and watching episodes like this not even being alive when that movie came out (1999).

Heidi Gardner’s “Thanks, Cricket Wireless.” takes this sketch from perfectly enjoyable to legitimately funny. The idea that President Trump’s emergency alerts will become just more tweets is easy, but the final, unexpected punchline makes the sketch. Cricket Wireless never hurt anyone, and yet a solid burn towards it feels so good.

Honestly, while not a sketch, Weekend Update actually does the closest it can to killing it this week. This is the combination of the returning Don Jr. and Eric Trump, Pete Davidson’s words on Kanye’s whole thing last week, and even the duo of Michael Che and Colin Jost getting shit done. Last week’s review observed the disconnect between Che/Jost being popular and the actual lack of appreciation from the live audience when it comes to their jokes, but this week, there’s a consistent quality throughout Weekend Update, not just from the guest characters; Che and Jost do a good job and work with as close to biting commentary as they can possibly imagine. The lack of a female voice is still glaring — especially with only the male guests this week — but at least they make it count.

Honestly, this would’ve been the “Cleopatra” sketch, up until the show chose to go with the New York Film Festival sketch to end the night. These sketches — with Kate McKinnon’s veteran actress Debette Goldry — essentially exemplify the problem with having a sketch specifically used to highlight just one performer. There’s nothing inherently wrong with that, but the key to making that kind of stuff work is to at least give everyone else to do. Cecily’s Marion Cotillard and Heidi Gardner’s Allison Janney almost seem like they might get anything to work with, but no, they’re both straight women for McKinnon’s Debette, to the point it’s a wonder why they need to even be characters. (Could they not just play themselves?) And then there’s Awkwafina, as Sandra Oh, where the biggest amount of effort is in the wig… and it’s still not up to Sandra Oh hair standards. The closest this sketch comes to anyone but McKinnon providing — or even attempting — laughs simply comes from McKinnon’s decision to keep on holding Awkwafina’s hand as she rants.

The best joke in this sketch comes before the sketch even truly starts, with the History Channel listings of “World War I,” followed by “World War II: Lost in New York.” The only thing that would’ve made it funnier was if it was “Back in the Habit” instead. There’s a very good sketch idea buried deep in this — the vanity of the ancient royal Egyptians mashed-up with obnoxious 21st-century speak — but it comes out with very poor, clunky execution. It’s perfectly normal to ask “What is happening?” during an “SNL” sketch… but the hope is that you can end up accepting it, not double down and ask “Why is this happening?” These questions fill this entire episode.

This is really more about being “Most Male Performer,” since Kenan Thompson seemingly appears in nearly every sketch this episode. He also (understandably, just look at his face) causes Leslie Jones to break during the “So YOu’re Willing to Date a Magician” sketch, whereas Pete Davidson disqualified himself from getting this week’s recognition—despite a great Weekend Update segment—by breaking immediately into that sketch over his own words that weren’t even all that funny. Never go full Fallon, dude.

Not an Honorable Mention, but it’s worth noting: As a musical guest, Travis Scott gets points solely for not holding the cast hostage at the end of the night—and the show runs short/on time enough that it’s able to air all of the pleasant goodnight this week—as well as his participation in the “Late Night Battle” (the dance sketch).

This is also a case of “Most Female Performer,” especially when this episode ends with that “Film Panel” sketch.

As much as the whole locker room portrayal of the Kavanaugh appointment is quite apt given the subject matter, it’s clear that the show just wants to get this over with, even before it ends. Consider the fact that this cold open is less than six minutes, while last week’s was 13 minutes long. Then again, the only “celebrity” in this cold open — based on “SNL” and its live audience’s “woo!” standards — is Kate McKinnon, so there’s no reason to drag things out. People were afraid that “SNL” would have another tone-deaf “keep holding on” moment like the “Hallelujah” cold open, but instead, they decided to go through this whole unpleasantness as quickly as possible before only tackling it again during the news portion of the show. (Consider how much of the premiere was Kavanaugh-adjacent to this week’s episode.)

The crowd’s laughter for most of this episode is so forced that it feels obligatory — like they know they have to laugh because it’s “SNL,” even though they can’t find the joke. The pacing truly doesn’t help throughout the whole episode, but pacing can only do so much.

As a host, Awkwafina peaks when she’s literally just being herself, giving her opening monologue about her family, her life, and what it means to be hosting this show. Her personality gets to show there in a way it never does for the rest of the episode. (Also: A reminder that “SNL” audiences love to see famous people so much, they “woo!” when the actual guest of the episode enters a sketch, even though it makes absolutely no sense.) Last week, even with weak material, Adam Driver was still able to give some memorable performances; that’s not the case for Awkwafina at all. And at this level, maybe all the blame can’t be shouldered on the material. If you were not familiar with Awkwafina before this, it’s hard to say you’d get a proper handle on who she is, after this. That’s also the case if you’re familiar with her too, to be perfectly honest.

And that honesty in the monologue? The honestly that shows you how important representation is? It’s essentially chipped away with the sketches in this episode, as there are frequent reminders just how little representation really exists in “SNL.” That’s clear in the Egypt sketch — which, again, has the premise of a solid sketch but none of the execution — with white people as Egyptians (even if you want to say Cecily’s playing the Liz Taylor Cleopatra, come on) and “Film Panel” sketch — with Awkwafina’s “Sandra Oh.” As someone who was in both “Crazy Rich Asians” and “Ocean’s 8,” it’s strange that there is zero attempt to do an “SNL” take on either. The former makes sense, in the form of a lack of Asian performers on the show (and the question is if Lorne Michaels would even outsource any Asian actors, as who knows if he even knows more that exist besides Lucy Liu and now Awkwafina and Sandra Oh) but the latter does not. A heist sketch seems like an easy “SNL” concept, even if it’s not a slam dunk. It certainly makes more sense for this episode than a parade of different types of magicians.