Yes — "Sign my titties" is a Willam Belli original. 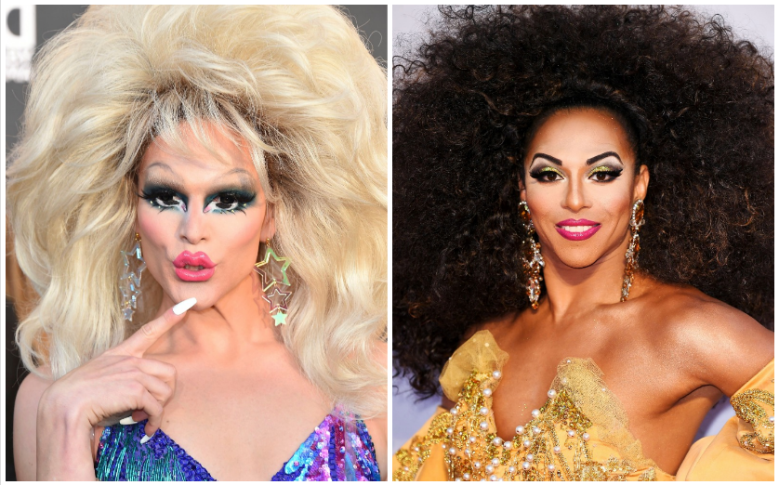 The first act of “A Star Is Born” plays a bit like the gay film “Weekend,” Andrew Haigh’s intimate romance which follows two guys over the course of two days. When famed country rocker Jackson Maine (Bradley Cooper), fresh out of whiskey, rolls into the nearest bar for a drink, he becomes immediately enamored with Ally (Lady Gaga), whose killer pipes earned her a coveted spot on the drag show line-up. Overseen by a charismatic emcee, played by “RuPaul’s Drag Race” favorite D.J. “Shangela” Pierce, as well as a ditzy blonde queen named Emerald (Willam Belli). It’s a glittering and gay way to open a movie, and one would expect nothing less from a Lady Gaga-headlining version of this Hollywood classic.

Much has been made of Cooper’s method directing, (he reportedly wiped Lady Gaga’s make-up off during her audition), and his commitment to naturalism extended to the drag bar scenes as well. “He said, ‘You know, you guys know this world. I’ve done my research but you guys know. So feel free to take it there. And if I need to pull you back, I will,” Pierce told IndieWire during a recent phone interview. “It lent a certain authenticity to the role that really pops in the film … we stepped into it and were able to add a little extra spice and flavor.”

Spice and flavor is what drag queens do best, and Pierce and Belli are some of the best in the game. Belli, a prolific TV actor before appearing on the fourth season of “Drag Race,” improvised one of the film’s funniest moments. “I had four or five lines in the script. I don’t think any of them are actually in the movie,” he said. When Jackson enters the dressing room after the show to visit Ally, Emerald excitedly asks him to sign her breast plate (but she doesn’t call it that). The line gets a huge laugh, and there’s even a callback to it later in the movie.

“I ran off set, grabbed a Sharpie from somebody and was like, ‘I hope this wipes off between every take,’ and it did. I was like, ‘the improv gods love me.’ Shit, I lucked out,” Belli said. A seasoned professional, he was shocked and delighted when so many of his jokes made it into the final cut. “You film and you’re like, ‘Oh, I hope a couple of my jokes made it in,’ because [Cooper] let it be collaborative and stuff. And, not only does he let a couple in, he let a few really good chuckles in. I was like, ‘God damn, man.’ He took care of me.”

Cooper and the creative team were so jazzed on Pierce and Belli, they re-shaped the scene to give them more dialogue. Pierce wasn’t even going to audition, since the original casting breakdown called for a Marilyn Monroe impersonator. “Honey, you know no matter how much time I spend, I’ll never look spot on like Marilyn Monroe,” said Pierce, who is African-American. A request from Gaga, who knew Pierce from her 2013 “Applause” video, quickly changed his mind.

“I got an email from Lady Gaga’s camp that said, ‘Hey, LG heard’ … You know, Lady Gaga, ‘Heard that you didn’t come in for the audition and she really wanted to see you for this role. She feels like you’d be a great fit in the film.’ So, honey, if LG asked, I found the nearest blonde wig and white dress and I hit it!”

Gaga has long been an ardent supporter of the LGBTQ community, and the love is mutual. Pierce, who described himself as “a fan first and a co-star second,” said he was pleased the film felt so inclusive. “Not only just inclusive, but it’s inclusive in a way that it’s respectful and authentic. It feels like a slice of life. Not like a punch line.”

“A Star Is Born” is currently in theaters nationwide.

This Article is related to: Film and tagged A Star Is Born, Bradley Cooper, Shangela, Willam Belli