Yorgos Lanthimos' dryly funny historical feature is all about power, and that means literally wearing the pants in a strange time. 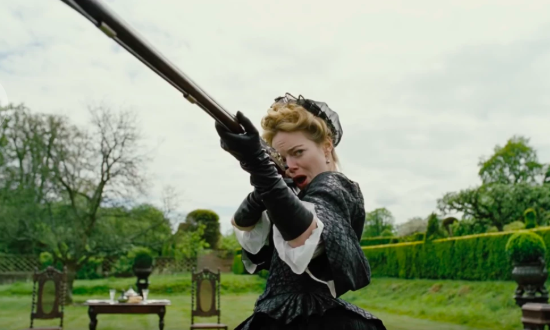 The following essay was produced as part of the 2018 NYFF Critics Academy, a workshop for aspiring film critics that took place during the 56th edition of the New York Film Festival.

Yorgos Lanthimos’ latest feature “The Favourite” is a delicious and biting look at the intrigue of the British Court during Queen Anne’s reign, and the fight between Sarah Churchill and Abigail Masham for her favour. The dryly funny film centers on a trio of women navigating their place in a power-driven world, and the film follows its central characters as they find increasingly absurd and inventive ways to explore and subvert the gender roles of the time.

Queen Anne (Olivia Colman) functions as both the literal and symbolic center of the power the other two women covet. What Sarah (Rachel Weisz) and Abigail (Emma Stone) are actually fighting for as they jostle for her favour is in fact political influence and the ability to determine their own lives. Anne’s position as the head of state allows her unprecedented reach and control, despite the film’s depiction of her as both a dilettante and a dolt. Sarah and Abigail offer differing sides of the same coin; aligning oneself with and then usurping power. Sarah has wrested political control from Anne by earning her favour through their sexual relationship, but now has to do what it takes to keep it. Abigail must do whatever is necessary to ensure that she will no longer be subjected to the whims of lesser men.

When we meet these historical figures turned farcical caricatures, Sarah is firmly entrenched as Anne’s favourite and Abigail has come to court after years of abuse, hoping to find a place to live and work. Things quickly devolve when Abigail starts insinuating herself into Anne and Sarah’s relationship, with an eye to edging Sarah out and securing a place for herself beside the queen. As both women manipulate Anne to their own ends, we see how they lean into and away from their prescribed gender roles as needed.

The men of the film are largely incidental to the plot. Nicholas Hoult’s Robert Harley exists mainly as comic relief and conditional ally to Abigail in his quest to have the Queen bow to his political goals and Joe Alwyn’s Samuel Masham is a dizzy little pervert who is only relevant as Abigail decides she will use him to restore her station to what it once was.

Boorish as she is, Queen Anne is the one that represents traditional and stereotypical aspects of masculinity. While her gout leaves her in pain for much of the film, she spends the rest of the time whining, complaining, and indulging her most fanciful whims, including a repulsive scene in which she gorges herself on an elaborate cake, throws it up into a bucket then returns to bingeing in earnest. The political aspects of her roles are left largely in Sarah’s hands to do as she sees fit, a fact understood and acknowledged by the men of Anne’s government. Anne spends her days caring for her 17 rabbits (one for each dead child) and yelling at her servants. She behaves much like a particularly ill-equipped man, while the woman in the wings with the real power keeps things from falling apart.

The two women sway Anne to their opposing sides with various sexual favours, but quickly learn that Anne uses sex as a tool of manipulation in the same ways we now consider inappropriate, allowing both Sarah and Abigail to perform sexual favours in exchange for political clout. She enjoys the game they play to gain her attention and delights in their struggle to please her, and this queer love triangle can be viewed through the lens of power with Anne at the apex.

Sarah and Abigail also use their frequent pigeon shooting outings in the same way men often do: to size each other up and display dominance. It’s during one of these fraught sporting events that Sarah tries to remind Abigail of her place in the court, and it’s also where Abigail slyly threatens to disclose Sarah’s sexual relationship with Anne. Even while literally wielding phallic symbols of death and dominance, they choose to use words to keep each other in line. Women’s weapons are most effective.

It’s curious to note then that Sarah always wear trousers during these outings, while Abigail does not. The trousers put her in the power position as she occupies the domain of men, and it’s no coincidence that she’s wearing them when Sarah resorts to poison, another woman’s weapon in order to dispense of her. It’s telling too that she returns to her ladylike frocks when she returns to beg Anne for forgiveness; an act of subjugation. Her performed gender roles shift depending on which woman she is dealing with.

Throughout the film, Sarah uses her clothing to explore and denote her masculinity; a signpost for those around her that she is not to be fucked with. But she is also adept at morphing into the figure the situation necessitates; a confident leader keeping usurpers in line, or a mewling damsel laid prostrate in service of another’s ego.

Both Sarah and Abigail acknowledged the limits of their time but transgressed their expected roles in order to determine the course of their own lives. Limited by their gender, they were not unaware of the disparate distributions of power. But rather than exist in a constant state of open rebellion, they sought instead to bring those functions into the realms of their own influence, bending the stifling expectations of the time to their own favour.

Fox Searchlight opens “The Favourite” in theaters on November 23.

This Article is related to: Film and tagged The Favourite, Yorgos Lanthimos