Ruben Fleischer's Sony tentpole is dividing critics online, with some bashing the movie as a "complete failure." 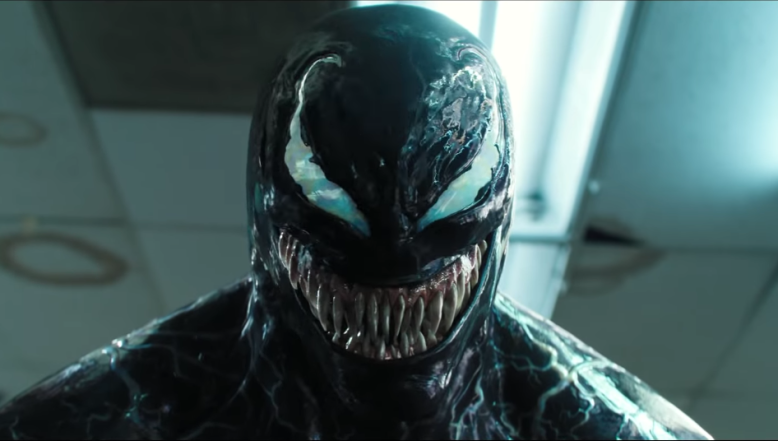 Sony lifted the social media embargo on “Venom” following the superhero tentpole’s Los Angeles world premiere, but the first reactions from film critics are hardly glowing across the board. The movie, starring Tom Hardy in the title role, is being met with a polarizing response online. First reactions range from some critics enjoying the film’s humor to others calling it “clunky” and a “complete failure.”

“Venom” is directed by Ruben Fleischer, best known for helming “Zombieland” and “Gangster Squad.” The plot centers around Hardy’s Eddie Brock, a journalist who becomes infected with an alien symbiote that inhabits his body and gives him superpowers. Riz Ahmed co-stars as Carlton Drake, the leader of a shady corporation that experiments with the human body’s capacity for symbiotes. Jenny Slate, Michelle Williams, and Reid Scott also star.

“Significant chunks of ‘Venom’ don’t work at all, but there is some serious charm to the Eddie/Venom relationship,” Collider’s Perry Nemiroff wrote after the film. “Not sure I had the intended reactions to some scenes but fun is fun, even when it’s totally ridiculous, right? It’s too bad they didn’t go for the R rating though.”

The biggest consensus among critics is that the script from Jeff Pinkner, Scott Rosenberg, and Kelly Marcel never manages to find a balance between the film’s gritty side and more comedic leanings. IGN’s Tom Jorgensen calls the script “a tonal mess that feels 15 years old, ignoring the storytelling strides that the superhero genre has made in recent years.”

Sony opens “Venom” nationwide this Friday, October 5. Check out a handful of first reactions below.

#Venom is like a buddy comedy in which one of the buddies has to prevent the other from biting people’s heads off, which is another way of saying I liked it.

Significant chunks of #Venom don’t work *at all* but there is some serious charm to the Eddie/Venom relationship. Not sure I had the intended reactions to some scenes but fun is fun – even when it’s totally ridiculous, right? It’s too bad they didn’t go for the R rating though.

Comic fans will like #Venom, as it pulls directly from the comics in many places. Tater tot fans will also like Venom. It’s certainly clunky & not as fluid as some recent Marvel movies, but it’s funny, intentional or not. Don’t take it too seriously, and stay through the credits pic.twitter.com/Llzvtv0fLL

I’m *fascinated* with VENOM. The cast seems to all know they’re in a darker superhero movie, except Tom Hardy who is basically remaking Jim Carrey’s Liar Liar. I kinda loved watching this movie, in a Rocky Horror type of way. At one point Tom Hardy and Venom make out.

Tom Hardy as Eddie Brock and #Venom has some really entertaining moments. A clunky script without nuance bogs the #Venom down, preventing it from choosing between being gritty, funny, or something unique.

#Venom wasn’t as bad as everyone was saying it was going to be. Tom Hardy is and always will be a great actor, and I laughed a lot — but I’m not sure whether that was intentional or not. Post-credit scene is 🔥

Sorry to say that #Venom is pretty much a complete failure – a tonal mess that feels 15 years old, ignoring the storytelling strides that the superhero genre has made in recent years.

A few fun Venom-centric moments aside, it has nearly nothing to offer. Don’t get your hopes up.

#Venom was surprisingly funny! I had a freaking great time watching it. Despite some problems, it did right by its main character, Eddie Brock/Venom. People forget that he’s always had a weird sense of humor in the comics, and that humor is fully on display in the movie! pic.twitter.com/20ufNrbGU4

Action-sequences and Eddie and Venom’s odd relationship are the highlights of #Venom but if Sony wants to move forward with a universe, it needs to just keep the few parts that work and scrap the large portion which does t.

Social embargo for #Venom is up. I talk about this a lot in my review but this is a movie that somehow slipped through a wormhole from 2004. That’s my biggest take. It’s a movie that spilled from the pre-MCU era through a crack in time and space.

It’s…not a complete disaster? At least I was never mad watching it? But it is an excruciatingly surreal experience. The humor, the story beats, everything right down to the Eminem theme song feels like it emerged Kimmy Schmidt style from a sealed off early 00s bunker.

This Article is related to: Film and tagged Sony, Tom Hardy, Venom