DNEG prepared for the final battle between Venom and Riot by tapping their inner symbiote, and the result was sheer "Looney Tunes." 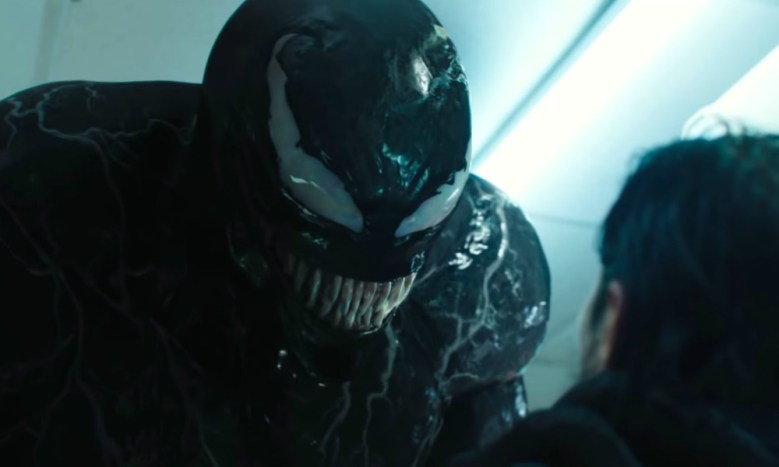 The hilarious Jekyll and Hyde relationship between Tom Hardy and his alien parasite in “Venom” proved a fun, if complicated, VFX challenge for DNEG. They not only had to animate Hardy’s slimy superhero but also his opponent, the larger, more powerful, sharp-edged Riot. And the final battle on the rocket launch platform turns the Marvel comic book adaptation into “Looney Tunes”-like mayhem.

“We needed to get across that Venom is the underdog,” said production VFX supervisor Paul Franklin of DNEG. “He has this slick, smooth, oily, black, look, which distinguishes him from Riot, who’s got this brutal metallic look. But while Venom is 7’6″ and weighs 500 pounds and has large claws, Riot is a foot taller and weights nearly twice as much, and has massive, slashing talons. And so Riot took on a rougher, more extreme, almost reptilian look.”

Read More:‘Venom’ Director Reveals How He Avoided R Rating, Says He Shot Film to Be PG-13 to Not ‘Exclude Any Fans’

First, DNEG had to nail the look of the symbiote, a glob-like amoeba creature that can move in any direction and extend tentacles. “They don’t have a defined body shape, but we wanted them to have a defined characteristic,” Franklin said. “We wanted them to feel predatory and threatening. We looked at slime molds, jelly fish, and time-lapse photography of amoeba. The animation team developed a rig for this blob to move along and shape-shift, and the visual effects team ran soft tissue simulations over the surface of the animation rig. And that gave it an interesting abstract quality and something to build on.”

After the parasite attacks Hardy (who voiced his comical alter-ego) and grows inside him, he slowly takes over, and during a fight in his apartment, sprouts tentacles. This was part of a transformation that was done as a hybrid of live-action and VFX. The remainder of the humanoid Venom was fully animated and required a complex series of rigs for the face and body (which ran through a massive muscle simulation). Venom can move fast, leap onto the side of buildings, and break through walls.

“The face has an exaggerated, graphic look but it wasn’t defined in the comics,” said Franklin. “We distilled the essential elements that were relevant to a Venom that could exist in a real, photographic world. But we needed to come up with a rules-based system for a consistent 3D model. In the comics, he could hyper-extend his jaw, he possessed a large tongue, and huge teeth that varied in length.”

DNEG’s model was also flexible. They could scale Venom’s head depending on the pose, make his teeth longer and shorter, and unhinge the jaw and open like a trap door. “And then, of course, we have the tongue, which was a key characteristic of Venom,” added Franklin. “But it was too comical to have it out all the time and posed a real problem to have him talk over it. So we had a complex rig that allowed us to animate this lashing tongue, and we could retract it and hide it completely inside his mouth. Used the tongue to punctuate certain moments.

“But we had to sell his emotion through his eyes. He has these killer whale eyes that are plastered onto the skull and wrap around his face. We realized early on that with Venom not having pupils, that made it hard to indicate where he’s looking. We found that we had to drive the eye shapes harder than we might’ve otherwise with a pupil inside.”

Riot contained a similar rig with complex facial controls (his head is defined by jigsaw plates) but with less effects layers than Venom. There was no rippling goo on his face. But Riot had custom rigs and an effects set to control and display his arsenal of edged weapons. This allowed him to whip out a knife, a blade, an axe, or a giant wrecking ball with spikes. But these were just one-offs.

Director Ruben Fleischer (“Zombieland”) kept the final fight between Venom and Riot  on the launch platform in a constant state of flux, which allowed great input by Franklin, the team at DNEG, and The Third Floor previs group.

“After we put it all together, we tried to elevate this with a fighting gag on the gantry,” said Franklin. “First, Riot attacking Venom with the axe and Venom grabbing Riot with his tentacles. Riot stomping Venom into the deck came in a second animation pass from DNEG.

“We took advantage of their liquid symbiotic characteristic, so we had this idea that Venom tries to possess Riot’s host, Drake [Riz Ahmed], and merges with Riot’s body, and so you have a swirling mass of symbiotic flesh, with the two humans revealed through the whirlpool. And you have two sets of fights, and it was informed by the early experiments with the raw symbiotes, and so we captured that quality and put it into the fight there.”

This Article is related to: Film and tagged Marvel, Tom Hardy, Top of the Line, Venom, VFX