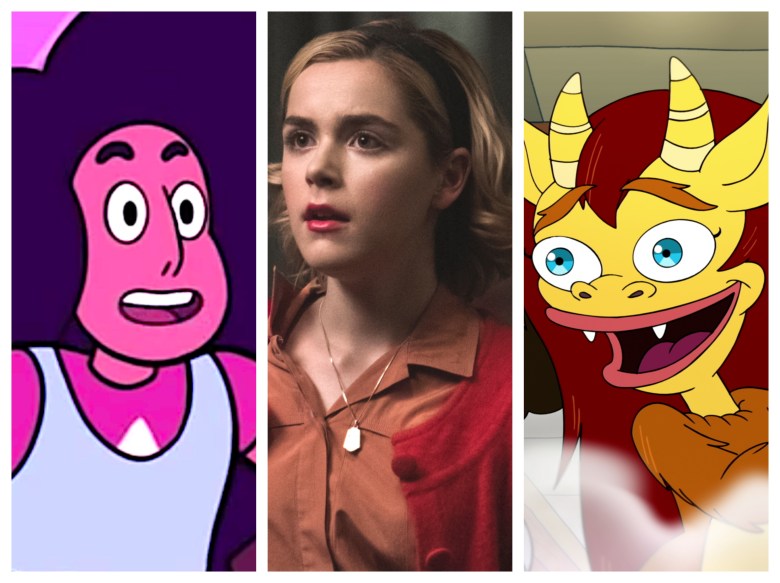 When did family-friendly TV grow a social conscience? Whether it’s the more youth-skewing “Steven Universe” and “Andi Mack,” or edgier teen offerings like “Big Mouth” and “Chilling Adventures of Sabrina,” shows aimed at adolescents are taking up the mantle to account for social wrongs ranging from sexism and racism to body-shaming and school safety.

Television has a long, if spotty, history of addressing social issues on primetime; Norman Lear was a master of this on “Good Times,” “All in the Family,” and “Maude.” However, this wasn’t the stuff of TV for kids unless they were watching Very Special Episodes, ABC Afterschool Specials, or PBS programs like “Mister Rogers’ Neighborhood” or “Sesame Street.”

Today, it’s become the norm for mainstream children’s programming to tackle representation, body positivity, and gun violence — touchy topics that once would never have made it out of development. “One Day at a Time” high schooler Elena (Isabella Gomez) is outspoken about gender identity and the importance of voting. Even “Fresh Off the Boat,” an ABC sitcom set in the 1990s, found a way to protest gender conformity.

Not only is the new star of “Doctor Who” a woman (Jodie Whittaker), she’s proven to be the most progressive Time Lord to ever man the time-traveling TARDIS. In her debut, Thirteen is positioned as a hero with an explicit ethical calling: “I’m the Doctor, sorting out fair play throughout the universe.” In the episode “Rosa,” her companions have a rude awakening in 1950s Alabama where they’re treated with prejudice and hostility. Their task is to ensure that Rosa Parks refuses to give up her seat on the bus so that the resulting boycott can kick off the Civil Rights Movement. In case the message isn’t clear, one antagonistic alien observes, “Tiny actions change the world.”

The call for characters and storylines that more accurately portray the world means more ethnic diversity, girls as protagonists, and more characters who don’t solely define themselves along conventional definitions of gender or sexuality. It’s an inclusive landscape that casts marginalized groups as everyday heroes.

“We are in is the very beginning of a majority-millennial parenting,” said Gould, who serves as Disney’s senior VP  Consumer Insights and Programming Strategy. “Even in the last five years [millennials] have been much more public about their own thoughts and concerns. They’re out on the streets making their voices heard for whatever cause they’re looking to change, and have been credited with making significant change in many fields. And now as parents, guess what? They’re doing the same thing and they’re telling their kids it’s OK to be who they are and to celebrate every piece of them. It’s a significant shift from a Gen-X parent who was much more focused … on making sure their child was happy. It feels like the millennial parent is much more focused on the wholeness of their child.”

Gould said that in a research study Disney conducted two years ago, it received feedback that kids wanted to see more inclusivity in the types of families depicted and in intersectionality, the many ways that kids identify themselves. “What it signaled to us is that childhood had shifted because the world had shifted,” she said. “They live in a different place than we do. We heard them asking for their lives to be reflected through media and were looking for ways for that to happen for characters and stories.”

Like Disney’s popular teen sitcom “Andi Mack,” which features a person of Asian descent as its protagonist, “Star Wars Resistance” features Japanese-American actor Christopher Sean as Kazuda “Kaz” Xiono, the first-ever Asian lead in the “Star Wars” franchise. “Kaz and his teammates are not flawless, but they’re doing their best,” said “Star Wars Resistance” executive producer Justin Ridge. “And I’m excited that our characters are represented in a wide array of colors, shapes, and sizes.” 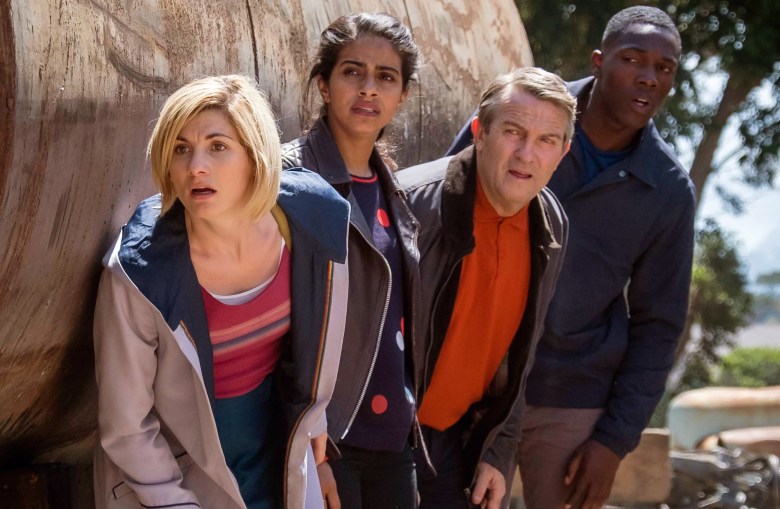 The new “Doctor Who” also gave us Mandip Gill as police officer Yaz, a role that the actress said was unavailable to South Asian actors when she was growing up. “There were Asian people acting, but not doing what I’m doing,” she said. “There wasn’t an Asian girl in sci-fi that was non-stereotypical and was doing a job that she loves, a job that people might frown upon in Asian culture. Girls are not supposed to do that; you’re meant to be a doctor or whatnot.”

People with disabilities, another underrepresented group, also found voice on “Doctor Who:” Ryan (Tosin Cole) has dyspraxia, a neurological disorder that affects coordination. “Sesame Street” introduced Julia, a muppet who is on the autism spectrum, and “Andi Mack” has addressed kids with learning disabilities and anxiety.

Netflix animated series “Big Mouth” takes the most embarrassing parts of puberty and celebrates them with unflinching hilarity. Season 2 dedicates one episode to girls learning to be comfortable with their bodies after a trip to the Korean spa where all the women walk around nude.

And while many family shows have introduced youth coming-out stories, “Steven Universe” has been on the forefront of portraying LGBTQ characters without context or explanation. Nonbinary Gems share romantic relationships, Fluorite is in a polyamorous relationship, and Stevonnie is literally the fusion of a boy and a girl and carries characteristics of both genders.

“My intention was to tell the truth. The show is, at its core, about growing up with my younger brother Steven, and the fantasy stories we loved and drew as kids,” said “Steven Universe” creator Rebecca Sugar. “I wanted to mix the reality of my childhood with those fantasy stories. I was a bisexual kid and a non-binary kid, and I was very anxious in my own skin. But I could always be myself around my brother, and I could always lose myself in cartoons. My intention with the show was to try to flip the script when it came to that feeling, for me and for my crew. I wanted a chance for us to find ourselves in cartoons.”

TV messaging aside, the world can present a reality of bigotry and injustice. This is where shows that appeal to older children begin to instill a sense of outrage and resistance. On “Sabrina,” its title character is half-witch, half-mortal, which gives her a unique insight into the benefits and inequities of both worlds. Although the show deals with Satanic themes, series creator Roberto Aguirre-Sacasa, who is also showrunner for The CW’s “Riverdale,” sees Sabrina (Kiernan Shipka) as a heroine who will fight the patriarchy, human or devil alike. (In one episode, Baxter High teens create a female support group to take on toxic masculinity and band together to protest banned books.)

“I think Sabrina is a wonderful role model for young people,” he said. “I think that her core personality — in terms of defending the underdogs, in terms of questioning authority, in terms of wanting to have control of her destiny and her body, and her beliefs — that’s pretty universal.

“All of the best horror movies and horror narratives, they’re always about something other than the monster. There’s always a social issue that’s being explored or a social message that’s being unpacked,” he said. “With ‘Sabrina,’ it felt like we were doing a show about witches, which has to be about women’s empowerment and women’s sexuality and the battlegrounds around those things. One of the great narratives of witches is the oppression of witches. And that’s translated to the oppression of minorities or the oppression of underdogs.”

Gould pointed out that most kids have access to some sort of device, and that means access to information. “The world is different, and they are having these conversations and debates at school and at home, with family members and with friends,” she said. “We feel very strongly that it’s important for us to give them characters and stories that are dealing with the same kind of things that they’re dealing with and help them lead their own conversations.” 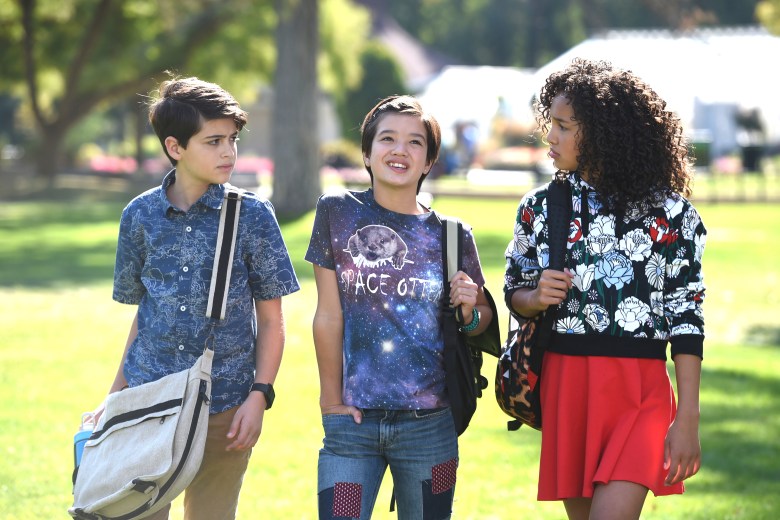 “Andi Mack” writer Elena Song said she chose to broach the subject of gun safety in two upcoming episodes after a tragic death in her family. “Near the end of Season 2, I was in the ‘Andi Mack’ writers’ room when my brother called and told me that my 15-year-old nephew Ethan was accidentally shot in the head and had died,” she said. “He had been playing at his friend’s house with unlocked guns that belonged to his friend’s father, and they didn’t realize one of them was loaded.”

Series creator Terri Minsky said the aftermath of the Parkland shooting also made her reevaluate what her viewers could handle. “A generation of young people had changed. Students not much older than our average viewer age were inspiring, they were powerful, they were leaders, and they weren’t afraid to be vocal about real issues that mattered to them. “For Season 3, I felt like I couldn’t just write about the things I usually do, like the everyday awkwardness of growing up as a teenage girl. There are bigger things consuming kids and their families now, and I wanted to represent them.”

Consultants from The Brady Center to Prevent Gun Violence and Hollywood, Health & Society reviewed both episodes to ensure that the topic of gun safety was presented in a realistic and accurate manner. Actors Joshua Rush and Luke Mullen also appear in a PSA following the episodes.

In the end, these TV creatives are products of today’s fractured society, and they’re doing their part to effect change through education. Sugar said they already heard encouraging feedback about their messaging.

“I often hear from viewers who say [‘Steven Universe’] helped them understand themselves, or gave them the strength to come out to friends and family, or gave them the tools to manage anxiety,” they said. “I love meeting parents who connect with their kids via the show, and siblings who watch it together. I am reminded that people want to be close with each other, and care about each other.”

This Article is related to: Television and tagged Big Mouth, Chilling Adventures of Sabrina, Doctor Who