Never has the image of a bouncing turkey butt been so poignant. 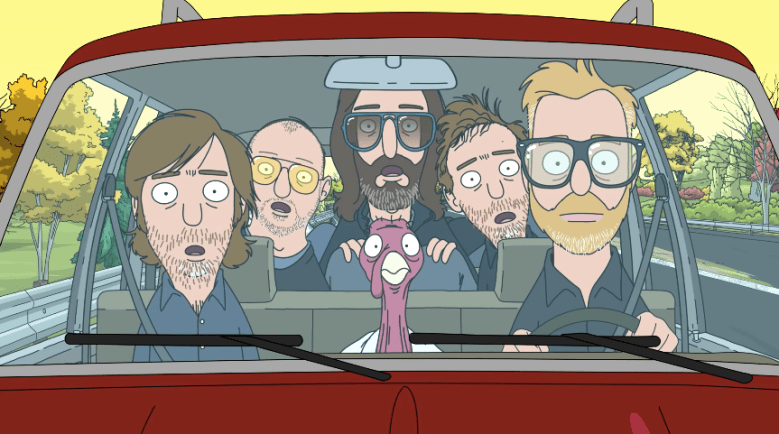 After making the best song of 2017, The National could have taken a break. But like football, cozy sweaters, and tiptoeing around the current political landscape of the nation, some Thanksgiving traditions demand to be followed.

As part of its ongoing annual contribution to the “Bob’s Burgers” expanded universe holiday celebration, The National offered up another song for the occasion. Adding to past installments like their cover of Linda Belcher’s “Kill the Turkey” and last year’s ode to one of the show’s secret MVPs “Give It to Teddy,” 2018 saw the band put together a ballad called “Save the Bird.”

Apropos of the title, both the song and the accompanying video describes the group’s effort to spare the life of a single turkey. Matt Berninger — the perfect baritone voice for an occasionally solemn day of thanks — headlines a sedan filled with various band members, including the brass section, which hasn’t sounded quite like this since the end of “Fake Empire.”

Yes, the chorus of animated heads popping into frame in unison in a high-pitched voice might take a little time to get used to. But once it’s clear what the song is building toward, it gets less and less silly. Regardless of your meat-eating proclivities, try not to get at least a teeny bit emotional watching the turkey bound away into a neverending field. It’s so floppy!

(For more emotional tracks from National band members, the Big Red Machine album from earlier this year is pretty great. No songs about poultry or pleas directed at showrunners of long-running animated series, but “I Won’t Run From It” is about as good as a song from 2018 is going to get.)

This Article is related to: Television and tagged Bob's Burgers, Thanksgiving, The National