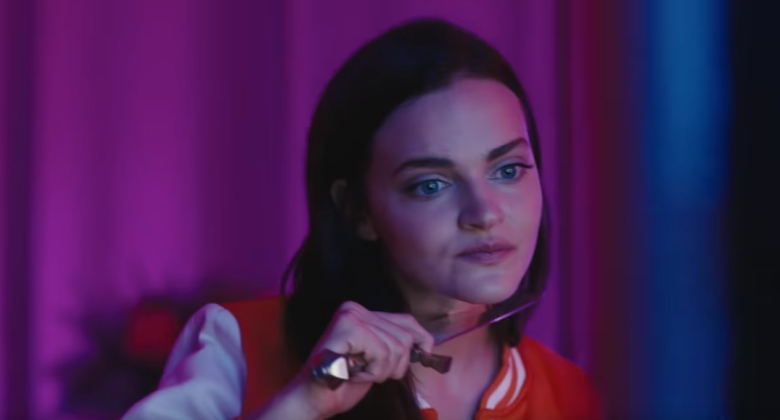 If horror is a reflection of the deepest societal fears of its time, “Cam” has dug into one of the 21st century’s most Kafka-esque problems — getting locked out of your account.

Produced by Jason Blum’s Blumhouse Entertainment and heading to Netflix, “Cam” stars Madeline Brewer (“The Handmaid’s Tale”) as a cam girl whose internet persona is hacked by an eerie doppelgänger. As the newly released trailer shows, she performs nightly on her web cam for anonymous voyeurs, pushing the envelope further in order to climb the rankings. After taking it so far as to slit her own throat on camera, she is locked out of her account and discovers a woman with her exact face dancing on the other side of the screen for her fans.

“Cam” received rave reviews as it made the rounds of the top genre festivals this year, including Austin’s Fantastic Fest and Montreal’s Fantasia Film Festival. In his B+ review out of Fantasia Festival, IndieWire’s David Ehrlich described “Cam” as a “Lynchian horror movie” and an “eerie mind-fuck about our online personas.”

As Alice/Lola, Brewer has shed the white bonnet and red robes of her star-making Hulu series, but the unhinged sweetness that makes Brewer’s Janine one of the series’ best characters is still there. With “Cam,” Brewer is poised to make a break from television to film, proving she is more than a character actress and more than capable of taking the lead.

“Cam” also stars Patch Darragh, whom Netflix viewers may recognize from the short-lived “Everything Sucks!,” as well as “Big Love” star Melora Walters. It is the feature directorial debut of Daniel Goldhaber, from a script by former cam girl Isa Mazzei. Goldhaber, Mazzei and producer Isabelle Link-Levy share story credit.

“Cam” arrives on Netflix on November 16. Check out the intoxicating trailer below.

This Article is related to: Film and tagged Blumhouse, cam, Madeline Brewer, Netflix