Trump can't even come up with his own original self-promotion ideas. 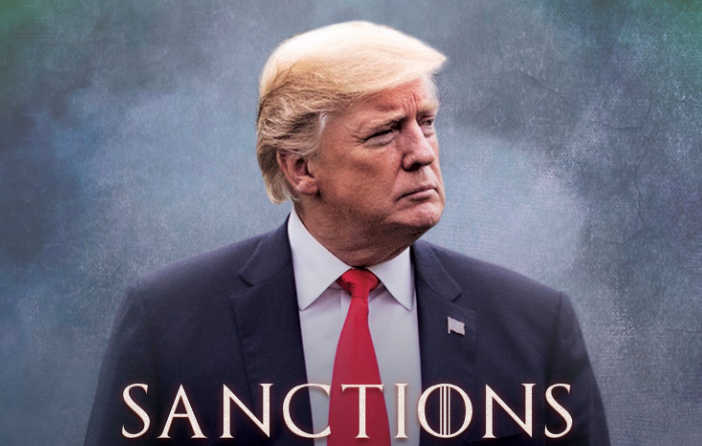 Donald Trump is hoping to get people excited for his upcoming Iran sections by promoting them on social media using “Game of Thrones” marketing. The president posted a photo to his 55 million Twitter followers featuring an image of himself with the caption, “Sanctions Are Coming. November 5.” Not only is the text a rip off of the famous “Winter Is Coming” tagline from “Thrones,” but the font is the exact same one used by the HBO fantasy series.

Unfortunately for Trump, nobody in the “Game of Thrones” family is a fan of his. Author George R.R. Martin went viral last year for telling Esquire Trump reminded him one of the most despicable characters in “Thrones” history. “I think Joffrey is now the king in America,” Martin said. “And he’s grown up just as petulant and irrational as he was when he was 13 in the books.”

Kit Harington, who plays Jon Snow, similarly shaded Trump in the same interview. “I believe in experts…Mr. Donald Trump — I wouldn’t call him ‘President,’ I’ll call him ‘Mister,’” the actor said. “I think this man at the head of your country is a con artist.”

Additionally, a writer on “Game of Thrones” reacted to Martin’s viral Joffrey comparison by saying, “People keep writing that his election is ‘just like “Game of Thrones.”’ Fuck you. Even Joffrey spoke in articulate sentences. I prefer Westeros, where politics makes sense.”

Trump is expected to reinstate sanctions against Iran on November 5. The sanctions were previously lifted by President Barack Obama during the 2015 nuclear deal. The White House says the sanctions will be “the toughest sanctions regime ever imposed on Iran.”

HBO reacted to the photo by saying, “We were not aware of this messaging and would prefer our trademark not be misappropriated for political purposes.” Maisie Williams added, “Not today,” in her own Twitter post.

“Thrones” will return for its eighth and final season on HBO sometime in 2019.

This Article is related to: Television and tagged Donald Trump, Game of Thrones