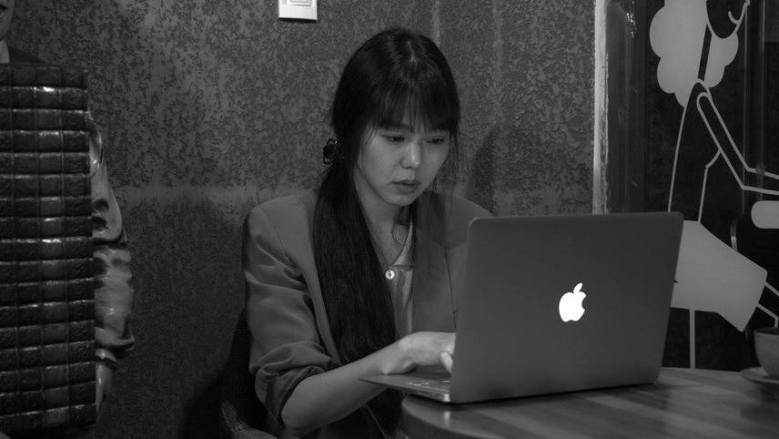 The following essay was produced as part of the 2018 NYFF Critics Academy, a workshop for aspiring film critics that took place during the 56th edition of the New York Film Festival.
A nondescript woman named Areum (Kim Min-hee) sinks into her laptop at a café table as nearby patrons air their personal resentments in fearless public confrontation. A young couple’s offhand hostility spins into jarring accusations of complicity in a mutual friend’s suicide; an out-of-work actor begs his acquaintance for housing, desperately insisting that he can pay rent. Conversations escalate with jarring speed as Areum’s attention floats across the café, eavesdropping—or maybe daydreaming?—to furnish an unseen writing project.

One man chides Areum for staring, but just as fast as he can offer himself a seat at her table, he feebly attempts to reverse the equation: He suggests that she, a self-proclaimed non-writer, should let him study her for ten days, in the name of artistic collaboration. No, thanks. Her non-existent boyfriend wouldn’t like that very much, and neither would she. Later, at lunch with her brother and his new fiancée, Areum questions how the two could possibly know each other well enough to consider marriage. But considering the personal revelations she overhears throughout the film, it’s no surprise that — in the hermetic universe that Hong Sang-soo has created for this film — secrets are disclosed with unsettling ease, and that tendency fosters a quick and uncanny intimacy. As well it should, in a film running only 66 minutes.

Most of the writing about “Grass” that’s surfaced since its premiere at this year’s Berlin International Film Festival has fixated on that detail. The film’s abbreviated runtime, along with Hong’s impressively rapid output— “Grass” is the fourth film he’s released in the past 12 months — dominate the critical conversation, as though they’re details that must be disclaimed before the analysis of its dense philosophical marrow can commence. Short-form hot-takes on Letterboxd call the film everything from “exceptionally, almost insultingly lazy,” to “a sketch that probably could have easily been left out of [Hong’s] oeuvre.” Longer reviews, though consistently more generous, often mention the film’s compactness off the hop. At worst, the film’s quick runtime seems to be a source of disappointment; at best, it’s briefly noted before digging into other matters, presumably those of “substance.” Even the film’s treatment by Berlinale programmers, who “downgraded” it out of the narrative main-slate (which featured his  “Nobody’s Daughter Haewon” in 2013 and “On The Beach At Night Alone” in 2017) and into the more avant-garde Forum lineup, suggests some charged recognition of its challengingly modest length.

But might “Grass’” shortness be a virtue unto itself? As an aesthetic choice, it fits with the theme that emerges as we wander through Areum’s day: The film is as ephemeral as the interactions we witness, gesturing towards something more — something unknowable — and always residing outside of what is given. But even further, it gestures towards a possible escape from the notions of completeness and self-contained narrative, standards inherited from classical cinema that too often go unquestioned, even in indie works like Hong’s.

Let’s assume, for a moment, that Hong’s harsher critics are right—that there’s something inadequate about “Grass” as an individual film; that it’s lazy or incomplete; a sketch that failed to materialize into a satisfying final product. These complaints evaporate when we begin to treat the film as one node in a broader network—an episode or amuse-bouche — rather than a fully-formed standalone object. As “Grass” demonstrates, the metric of a film’s “completion” is a tricky thing: does it need a three-act structure, satisfying narrative resolution, or triumphant hero’s return? Can a film, as a necessarily incomplete representation of a particular onscreen world, ever really be “done enough?” Once we begin to question these underlying assumptions, the critiques begin to unravel. The conventions that govern a film’s acceptable runtime and self-sufficiency are just as constructed—and, thus, just as compelling to break—as those that govern its narrative structure.

In 2016, the Met Breuer inaugurated its then-brand-new space with “Unfinished: Thoughts Left Visible.” The exhibition centered around the question of what it means for an artwork to be incomplete, whether unintentionally or through a a calculated non finito. Some of the works on view resided in a third, even more controversial category: objects that were deemed finished by their maker, but not so by public reception. Some, like Robert Smithson’s “Mirrors and Shelly Sand, 1969-70,” were “unfinished” in the sense that their use of volatile materials left them constantly decomposing, reversing their completion as soon as it is proclaimed. Another sculpture in the show, Louise Bourgeois’ “Untitled (No. 2), 1996,” detailed a tangle of dismembered hands carved into the corner of an otherwise unrefined block of pink marble. The character of its rough surface, unfinished in the most literal sense, is central to the sculpture’s resonance for me: Artistic mastery is always suggestive of some meaning left undetermined—some previously unexplored direction to ponder on the train ride home.

Hong’s working style recalls the calculated roughness of Bourgeois’ sculpture: the relative brevity of many of his films (with “Grass” and “Claire’s Camera” serving as recent examples) is complemented by an ample, theoretically-dense oeuvre, inviting diverse interpretations of the relationships between works. In leaving something visibly unresolved, both foreground the virtue of unrestricted meaning, of leaving something to the imagination. While the curiosity that this open-endedness elicits might be allayed through a deep-dive into Hong’s expansive and often self-referential canon, the precise connections between works are never confirmed as definite answers. In this sense, his films are just as generative for first-time viewers as for career fans.

How might we as moviegoers—film buffs, Hong completists, confused dads who have stumbled into the midst of all this—benefit from relieving ourselves of the expectation that a slight film is a deficient one? Already, in the trend towards “slow cinema” that’s taking hold in global independent film, we can see an embrace of different narrative structures—in this case, stretched out rather than abbreviated—creeping towards the mainstream. Perhaps, celebrating Hong’s slight, frequent forays could be the logical converse—another structural choice that rejects the received wisdom about what constitutes a finished film; another thoughtful alternative to the two-hour sequential epic. Like a couple discussing private matters a little too loudly and within public earshot—accepting our attention, stopping just short of begging for it.

The Cinema Guild will release “Grass” in theaters in 2019.

This Article is related to: Film and tagged Critics Academy, Hong Sang-soo, NYFF 2018