The series finale of "House of Cards" is dividing fans. Here's why executive producers Frank Pugliese and Melissa James Gibson ended the show this way. 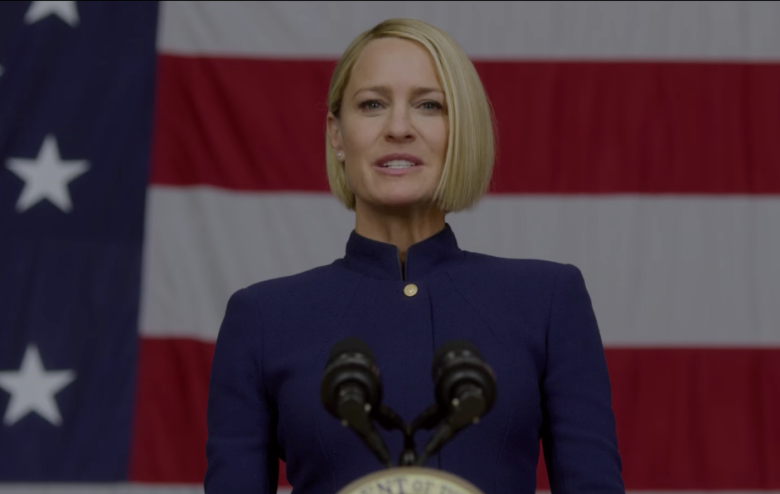 “House of Cards” has finally come to an end, but fans aren’t exactly thrilled with how the series concluded. In the series finale, Doug Stamper (Michael Kelly) revealed he was the one who murdered Francis Underwood (Kevin Spacey) in an attempt to protect his legacy. Stamper had previously discovered Frank was going to kill Claire Underwood (Robin Wright). The final moments of the series depict Claire murdering Doug, and the series ends with Claire holding Doug’s dead body.

“It was a little bit of a bookend to where the series started with Francis mercy-killing the dog and then looking at us and embarking on that relationship with us,” Gibson said. “And you know, there’s that final look of Claire’s at the end. There’s been sort of a switching of faith, in a way, I mean, obviously she’s been ascendant ever since the end of Season 5. But hopefully it speaks to the journey and the various prices that have been paid, sort of the cost of all this ambition and relentlessness.”

Gibson and Pugliese continued by saying it only felt right to end the series with the violent conflict between Doug and Claire. “Claire enters this season, quite literally declaring independence from Francis and really trying to embark on her way,” the producer said. “Whereas Doug Stamper, all season, he is so inextricably tied to Frances Underwood’s legacy because his identity is so intertwined. And it just created a really useful conflict, storytelling-wise.”

“The question for the ending was just Doug saying, ‘I’m the better wife because I’m the one who killed Francis and protected his legacy,'” added Pugliese. “While at the same time, is Claire releasing Doug of his pain and giving him a sort of a mercy killing? Or is she taking care of a problem? Again, all questions.”

The producers revealed the series’ final scene was shot on the last day of production, and Gibson referred to filming the scene as “emotional.” “Robin was directing with her big pregnant belly, running back and forth,” she said. “It was really intense and emotional, and everyone was so focused and so wanting to make sure we ended it correctly.”

When “House of Cards” cuts to black, Claire has murdered Doug and the country is on the brink of a nuclear war, which is two major cliffhangers to leave open-ended with no plans of the series continuing. Pugliese said that as the writers were coming up with the perfect way to end the series, leaving things ambiguous was the only way that felt right.

“If anything is open-ended about the ending, it’s because it’s the right ending for the story,” Pugliese said.

The final season of “House of Cards” is now streaming on Netflix.

This Article is related to: Television and tagged House Of Cards, Netflix, Robin Wright