Netflix's ambitious motion-capture-filled feature offers a darker look at the classic Rudyard Kipling tale, but even eye-popping effects work can't save it.

Few Hollywood talents have done more for the art of motion-capture performance than actor and filmmaker Andy Serkis, whose work in such films as the “Planet of the Apes” series and the latest “Star Wars” efforts always beg the question: Should mo-cap get more respect? If anyone is going to smash the wall that separates traditional performance and the work done by actors tasked with effects-heavy work, it’s Serkis. Which is why it was only fitting that the long-time actor would make his directorial debut on the mo-cap-heavy “Mowgli: Legend of the Jungle,” a passion project that adds a darker touch to Rudyard Kipling’s beloved classic “The Jungle Book.”

While Serkis’ film was originally meant to open in 2016, pitting it against Jon Favreau’s own “The Jungle Book,” it was eventually pushed to 2018, allowing Serkis’ film the chance to further refine the kind of technology meant to believably morph Benedict Cumberbatch into a nefarious tiger. In the interim, Favreau’s film went on to make nearly a billion dollars, Serkis debuted his live-action drama “Breathe,” and Warner Bros. sold off its “Mowgli” rights to Netflix. None of these developments served “Mowgli” very well.

Bolstered by often-stunning motion-capture work, the ambitious “Mowgli” offers a more dramatic take on Kipling’s story than has been put on screen for a child-skewing audience. The result falls into a strange in-between territory — not entirely appealing to either kids or to adults, while essential characters are either accomplished effects work or dismal renderings. Early sequences in Mowgli’s adopted jungle home are thrilling and immersive, while later jaunts into the civilized world are flat and filled with imagery all but guaranteed to chill audiences for years to come. For every scene of dazzling wonder, there’s another of outsized horror; for every big cat who looks ready to jump off the screen, there’s a wolf that appears bizarrely unfinished. There is little middle ground.

For all its untraditional aims, “Mowgli” follows a well-worn path, focusing on a young orphan (Rohan Chand, holding his own even against the best mo-capped performances) who is left to die in the jungle, only to be saved by a well-meaning pack of wolves. Mowgli grows up cherishing his home and his family, and is taught and protected by both Baloo the bear (Serkis) and Bagheera the black panther (Christian Bale), but the evil tiger Shere Khan (Benedict Cumberbatch) is hellbent on destroying Mowgli and his pack. Kipling’s original stories were always filled with darker tones, unafraid of death and bloody infighting, though Disney-fied versions of the tales permanently toned them down for kiddie consumption. 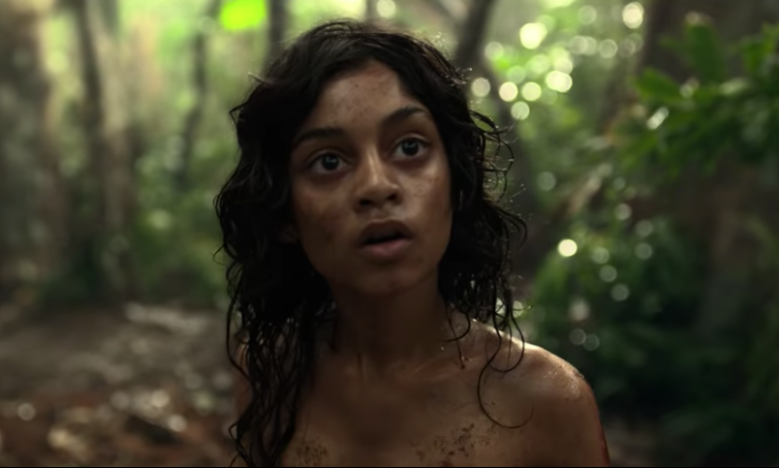 “Mowgli: Legend of the Jungle”

Serkis initially creates a compelling bridge between Kipling’s original vision and the narrative ascribed by pop culture: Mowgli’s early years are happy but fraught, and the reality of his differences are never far from anyone’s mind. For one thing, he’s a human child attempting to live with a group of wild animals that aren’t all entirely sold on his importance to the group; on the other hand, it’s the wolves that look the worst of Serkis’ many mo-capped creations. Naomie Harris provides a gentle performance as Mowgli’s wolf-mom Nisha, and Peter Mullan’s pack leader Akela is distinguished, but each wolf looks silly and unfinished when put alongside stunning supporting stars like Baloo and Bagheera.

Eventually, the disconnect between the artistic wonder of those characters and the rest of Mowgli’s family only distracts. From scene to scene, “Mowgli” is eye-popping and undercooked.

The narrative suffers a similar fate. By the time Mowgli is forced back into civilization, the jungle has crumbled into madness and political machinations (you know, for the kids) and the shell-shocked youngster is trapped in a cage, screaming for his family. It’s heartbreaking, but at least it’s somewhat understandable. Once Matthew Rhys stomps into frame as a guarded big-game hunter, “Mowgli” abandons all sense of wonder and opts for a dark weirdness that will likely turn off audience members of all ages, while scarring a few of them along the way (a scene involving the jungle’s monkey population is revolting, and a later revelation involving one of Mowgli’s cub friends is one of the more horrifying things put to screen this year). The plot points that push Mowgli into his biggest revelations are hammy and obvious, punctuated by big shocks that are unearned and jarring simply for the sake of turning the narrative.

Mowgli is meant to live in two worlds, a “man-cub” fighting to be himself amongst creatures not used to such dichotomies, but “Mowgli” can never find the happy medium between any of its warring factions. Too dark for kids, too tame for adults. Stunning effects, occasionally wretched motion-capture. The technology may be there, but that doesn’t mean it’s been utilized to its full, feeling powers. It’s a coming-of-age story unable to push forward in all the ways that really matter.

Netflix will release “Mowgli: Legend of the Jungle” in limited theaters on November 29, with a global streaming launch set for December 7.

This Article is related to: Film and tagged Andy Serkis, Mowgli: Legend of the Jungle, Netflix, Reviews