George R.R. Martin's novella trudges to the small screen as a pitch-black sci-fi mystery holding all its tedious secrets out of sight. 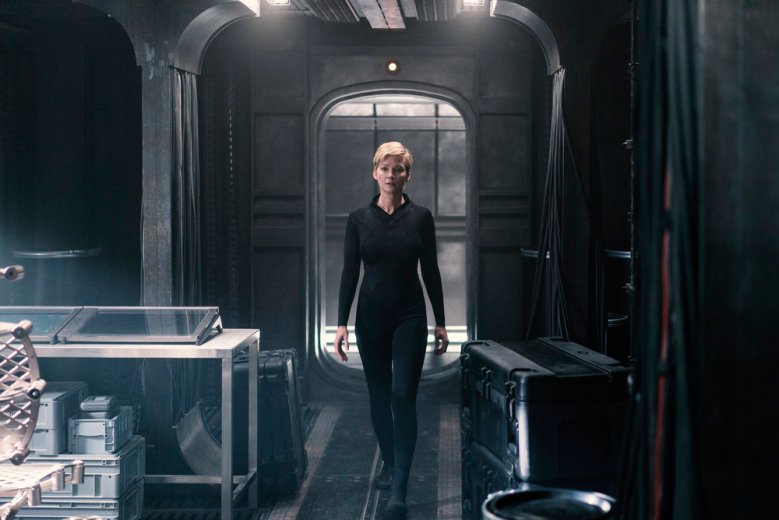 Not that far into “Nightflyers,” Syfy’s bleak adaptation of George RR Martin’s bleak 1980 sci-fi novella, a large mechanical spider starts shooting up the crew with searing red laser beams. You see, the technology onboard the eponymous spaceship, the Nightflyer, is malfunctioning. It malfunctions a lot, and no one knows why. Well, someone might know, but despite an “accident” involving glass that makes John McClane’s barefoot jog look pleasant and creepy ghosts trolling passengers in the hallways, well, no one’s saying what’s up.

The mysterious destructive force plaguing the characters also ends up leveling the series. So much information is held back in Jeff Buhler’s 10-episode first season, and so many strange things keep happening (with unreasonably calm reactions from the people onboard), that “Nightflyers” quickly pivots from an intriguing foray into hard sci-fi to a confounding slog through the most boring blackness of space. How they manage to dull a story that includes a two-foot tall robot spider with red lasers shooting out of its eyes — a spider, mind you, with pretty great, albeit unintentional, comic timing — is through earnest, unceasing, and quite wearying self-seriousness.

“Nightflyers” is set in the far reaches of space, tracking a group of colonists who’ve abandoned an Earth on fire. Their home planet (and ours) is burning up, and the brevity of this explanation for their departure — as if everyone watching already knows such a fate is inevitable because, you know, it pretty much is — is as close as the show gets to making a political statement. It’s far more concerned with the group of scientists hitching a ride so they can make first contact with alien life. That such an important endeavor sounds like a mission deserving its own spaceship could also be perceived as a political statement, since Dr. Karl D’Branin (Eoin Macken) requested funding and got turned down by skeptics who don’t believe in scientific facts. But now we’re giving the robot spider show a little too much credit. 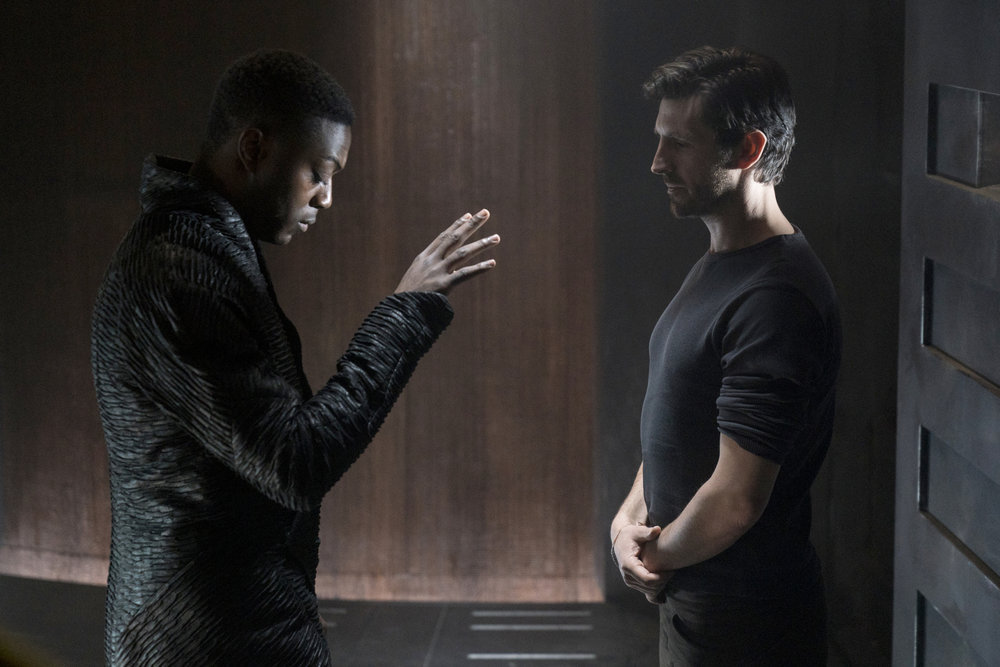 Karl and his co-horts, including Dr. Agatha Matheson (Gretchen Mol), a xenobiologist named Rowan (Angus Sampson), and Lommie (Maya Eshet), a cyberneticist who can talk to computers by plugging a cord into her arm, need to be on this ship because this is the ship that’s haunted. Holding court as the creepy caretaker is, of course, the captain; a presumably handsome gentleman named Roy Eris (David Ajala), and we have to presume he’s handsome because he refuses to leave his private quarters and only appears in digital holograms — like any rational human being might, if they knew their spaceship was haunted.

Of course, he uses his knowledge of the ship to spy on everyone onboard, including Melanthia Jhirl (Jodie Turner-Smith), who knows he’s watching her bone down with other crew members, seems to like it, and may or may not start an earnest romantic relationship with the Cap’n to reward his perverted voyeurism. In case it’s not already clear, there’s a lot going on in “Nightflyers.” Much of this review could’ve been dedicated to the dwindling importance of Thale (Sam Strike), a telepath brought onboard by Dr. Karl to help communicate with the aliens, but his bloated notoriety at the start best mimics the show’s own misguided sense of grandiosity. He’s another character you’ve seen before — same powers, same arc, same generic bad-boy-with-a-heart-of-gold — made interesting for the fleeting moments when you don’t know who he is or what he can do.

“Nightflyers” is the kind of sci-fi show that wants to be different from all the other sci-fi shows, even though nothing besides said desire separates it from the pack. Sure there’s extra blood, extra darkness, and extra effects (which are quite good, honestly — even the spider robot), but the series is dependent on not telling the audience what’s going on in order to trick them into thinking something radical is happening. You might get confused and then credit the show for being too advanced to keep up with, but really it’s just not providing necessary plot points. “Nightflyers” doesn’t so much have a tone as it suffers from seasonal affective disorder. With so many shadows cast over the cold decor of your less-than-homey space vessel, all the bad things that happen feel worse and are made to feel more significant by the blaring vocal cues and horrified faces of a game cast.

But the relentless weight proves crushing long before you find out there’s nothing to crush. Not scary enough to be good horror and too simple-minded to be grand sci-fi, “Nightflyers” is just another schlocky TV show pretending to be more than it is. What’s sad is if it accepted its limitations, only then could it have fun within the genres it’s trying to eclipse. Only then would the robot spiders really win.

“Nightflyers” premieres Sunday, December 2 at 10 p.m. on Syfy. All 10 episodes will be made available at that time on streaming and digital platforms.

This Article is related to: Television and tagged Nightflyers, Reviews, Syfy