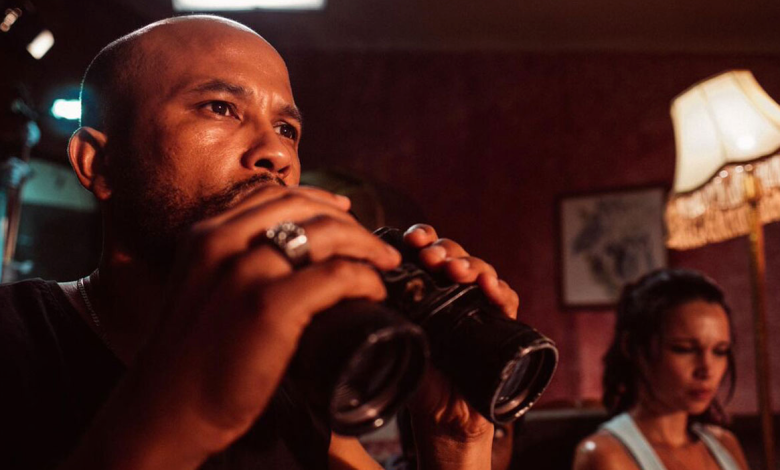 In “Number 37,” South African writer-director Nosipho Dumisa takes the basic set-up of one of her favorite films, Alfred Hitchcock’s “Rear Window,” and gives the scenario a fresh setting: the poverty-stricken, crime-ridden region of a Cape Town enclave, far removed from the original movie’s upscale Greenwich Village locale. The result is the impressive debut feature “Number 37″ — a grittier spin on the voyeuristic thriller, anchored by a strong performance by star Irshaad Ally, as well as a socially relevant message.

A devourer of cinema from childhood, Dumisa grew up in a small town not unlike the setting of her film, and never imagined a career as a filmmaker. “We’ve had universities that offered media courses and so forth, but actual film schools are still a relatively new concept in South Africa, maybe 20 years old,” Dumisa said. “So I never really conceived of an idea of an industry behind the making of films. I just knew I loved movies.”

Initially, she explored a career as an actress — but a film school application error accidentally enrolled her in the writing and directing program at AFDA, The School for the Creative Economy in Cape Town. She decided to just go with it — and the rest, as they say, is history.

Based on her 2014 short film of the same name, “Number 37” follows a small-time crook who becomes wheelchair-bound in a drug deal gone wrong. His concerned girlfriend gives him a pair of binoculars to keep him occupied during his homebound days with limited mobility. One day, while idly surveying his block, he accidentally witnesses a murder. With a loan shark breathing down his neck, he decides to blackmail the killer — a plan that goes horribly awry, putting himself and those he loves in harms way.

While her childhood years were spent watching movies, it wasn’t until film school that Dumisa learned of the great filmmakers, including Hitchcock, recalling “Rear Window” as “this wonderful thriller that we studied at school and absolutely loved.” After watching David Fincher’s “Seven,” she finally realized what kind of filmmaker she wanted to be. “I love what telling a story via genre cinema can allow you to do,” said Dumisa. “You can entertain while still teaching the audience something, without really preaching.”

Post-film school, realizing that there weren’t many opportunities for young women, Dumisa teamed up with friends to launch Gambit Films, under which they produced several shorts. “We were just trying to get our name out there,” the filmmaker said. They were eventually encouraged to enter a short film competition run by a local TV broadcaster.

On short notice, the team had just one day to come up with an idea for a story. It was then that they recalled Hitchcock’s genius. “As we were talking through ideas, we remembered the film we all loved so much, and thought, we can do something with ‘Rear Window’,” Dumisa said. “So our approach was: Hitchcock built a set for his film, but we’ve got these real buildings in the Cape Flats that have so much historical relevance, and what’s happening there now,” she said, referring to an expansive region described as “apartheid’s dumping ground” that, from the 1950s, the apartheid government forcibly designated as home to the non-white population.

“Cape Town is known around the world as one of the most beautiful cities, but what is not realized is that the majority, mostly people of color, are living in the worst conditions, and there’s very little being done about it,” Dumisa said. “These people were moved to these areas against their will, and over time, became stuck there, and crime due to poverty became rampant.”

Forty years later, apartheid officially ended. “Politically apartheid ended, but nothing really changed economically because the people never really left the Flats and the situation has only gotten worse,” said the filmmaker. “I don’t come from there, but I look at Cape Town and I’m appalled by how divided it is. Once you’re inside the city, it’s so easy to forget, because it’s kind of built in a way that almost guarantees you don’t see the poverty around you. So there was no way I was going to set this film in any other place than where I felt there are lots of injustices that the world is still not paying attention to.”

And so the filmmaker and her team took the “Rear Window” premise and shaped a narrative around the Cape Flats, creating a riveting, contained thriller that has something to say about the literal and metaphorical lack of mobility of its residents. The short film was a local hit for Gambit Films. “And it was then that we knew that this was going to be the basis of our first feature,” Dumisa said.

She initially wrote the feature screenplay for “Number 37” in English, believing it would make the film more commercially viable, especially internationally. “But as I started really getting into location scouting and casting, adamant that I wanted actors from within the world the film is set, I recognized that making it in English would ring completely false,” she said.

The language that the film’s characters speak is a very specific dialect of Afrikaans, an official language of South Africa, with its own conflicting political history, and is derived from the form of Dutch that was brought by settlers in the 17th century. “It’s a dialect that you won’t really find anywhere else around South Africa,” Dumisa said. “It’s very specific to this subculture in the Cape Flats. And for a long time, this subculture wasn’t really allowed to use this dialect in media, so it is significant here because I could’ve asked the actors to speak in any other language, but it would’ve been inauthentic.”

Unlike most comparable films directed by first-time feature filmmakers across the African continent, financing came together with ease. The local success of the short film led to a pre-sale from South African broadcaster M-Net, providing an early chunk of the budget. The rest came from the Department of Trade and Industry, as well as the filmmaker’s production company, and American sales company, XYZ Films, known for its focus on genre films like Panos Cosmatos’ outré revenge thriller, “Mandy.”

Dumisa sits comfortable within a South African new wave of young filmmakers making bold statements with international appeal. “South Africa continues to go through a lot of change, and as a young group of filmmakers, we are changing with it,” she said, citing the western “Five Fingers for Marseilles” as another example. “I think it’s because these are the films we grew up with, and thematically, we’re disrupting a system. For a long time, South African films were very political. And we’re saying, we can be political, but we can also entertain.”

An auspicious feature debut for the 29-year-old, “Number 37” made its world premiere to critical acclaim at the 2018 South by Southwest Film Festival, and screened at the Fantasia Film Festival where Dumisa won the Cheval Noir Best Director prize.

The filmmaker said she hoped to direct an English-language film, aiming for broader appeal, and has already started to develop several ideas, including a U.S.-set crime thriller. “It tackles issues of injustice and privilege, which are themes that always interest me,” she said. “We hope to get that going soon.”

“Number 37” is now available from Dark Star Pictures on VOD.