The Starz drama doesn't shy away from the realities of 1700s American society, but it makes for an uneasy mix. 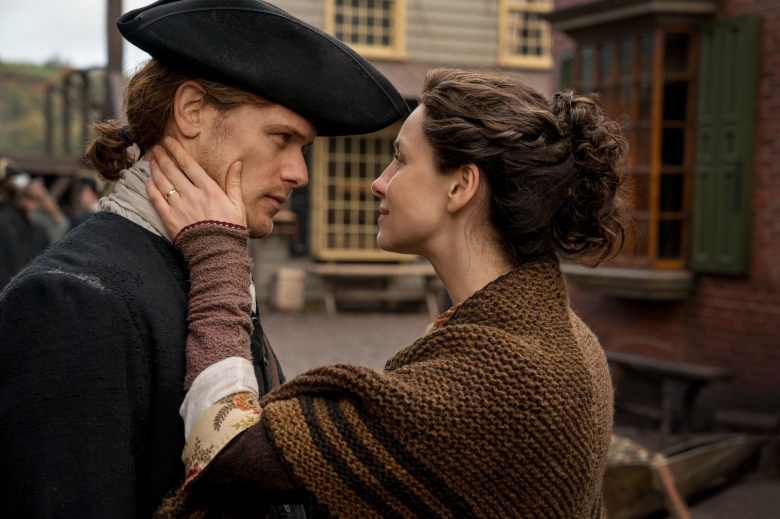 As always, the new season of “Outlander” opens with a charming musical reminder that the times, they have changed for TV’s most chronologically complicated, too often charming, love story. Over the first three seasons of the Starz series, the show has journeyed from 1940s England to 1700s Scotland and France, to 20th century Boston and back to the 1700s again — but now the familiar tune of “The Skye Boat Song” is accompanied by an awfully American banjo.

The twist with Season 4, as promised at the end of Season 3, is that Jamie (Sam Heughan) and Claire (Caitriona Balfe) have found themselves literally shipwrecked in America in 1767. Their circumstances might be bleak, but it’s also an opportunity to build a new life together in a new land — quite a romantic concept for the pair, who have been separated for decades and are looking to rebuild not just a home, but their life together.

After Season 3’s long separation for the characters, Season 4 represents a refocusing on the Jamie and Claire relationship, and while the characters are now far older than when an accidental trip through time dropped Claire into the middle of a Highlander rebellion and into Jamie’s arms, their passion is not lacking — Balfe and Heughan have been playing these characters for so long that their chemistry now feels as natural as breathing, and the show knows how to lay in just the right amount of tenderness without things getting overly sappy.

The show’s production values maintain their usual level of quality from past seasons, especially when it comes to the wardrobe design — but this season does feel different. As lovely as it is to see the two characters back together and truly bonded after surviving literal decades of struggle and hardship, Season 4 of the show has no shortage of ugliness and brutality, due to the complications of this time period, especially when it comes to the issue of slavery. The central characters of “Outlander” might be English and Scottish, but this is an American showrunner adapting an American author’s books for an American network. And since even before “Gone With the Wind,” American film and television has struggled to make sense of how to tell period stories about pre-1865 society without acknowledging the brutal aspects of that society.

The issue of legal slavery is a big factor here — while it came up in Season 3, as a woman of the 20th century Claire’s modern ethics thus are an even bigger source of conflict this season. In addition, the show’s frontier setting puts another awful blight of American history on display; the treatment of Native Americans in the American colonies at this time isn’t anywhere near the brutality of future decades — instead, the conflict between white settlers and the indigenous people of the land is escalating towards that awful state of affairs.

To its credit, “Outlander” doesn’t shy away from dealing with these issues, but flounders a bit in trying to ensure that yes, the white people of this era may be filled with racism and prejudice, but Jamie and Claire are different — an attitude that at times leaves the show vulnerable to the “white savior” cliche that does the storytelling no favors. 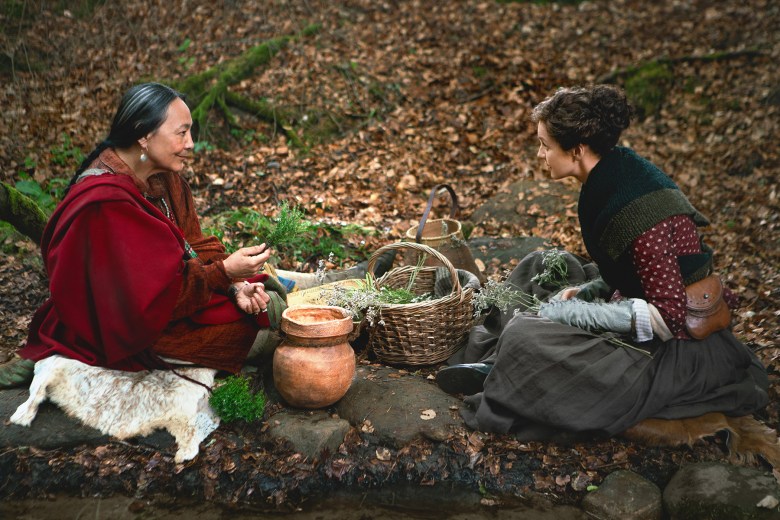 It’s a popular joke amongst female “Outlander” fans (just one recent example: Lin-Manuel Miranda’s wife) to wish that they, like Claire, could travel back in time to the 1700s and find their own Jamie Fraser. But what this joke brushes over is the basic facts of daily life in the 1700s. It’s a way of life that in some ways is simpler than modern times, but the reality is that even if you’re lucky enough to be a white person of privilege, you’re still living for fewer decades with fewer teeth, in a society where those not lucky enough to be white people of privilege are far worse off.

In all its varying eras and locations, “Outlander” has never been squeamish about the grime and misery that accompanies life in these time periods, as well as the prejudices engrained in these societies. But that has always existed, to a degree, in a complicated symbiosis with the dreamy idealized romance at the center of the story in seasons past, and now, because American history is far uglier than we sometimes want to remember, Season 4 amplifies this issue.

“Outlander” is a show full of improbable plot twists, going all the way back to Claire’s original trip through time courtesy of some magic Scottish rocks. But perhaps the trickiest one for the show to make believable was her decision, in Season 3, to go back a second time. That said, for viewers it was pretty obvious why a progressive educated woman would abandon modern life (including her daughter) for the trials of the 1700s — Claire’s enduring love for Jamie, after all, was never in doubt.

After watching six episodes of the season, what remains to be seen is how that love measures up to the complicated reality in which the Frasers have landed, and if the show can ultimately do justice to both the darkness and the light of this tale.

This Article is related to: Television and tagged Outlander, Starz, TV Reviews