Exclusive: The "American History X" director has released an incendiary call to action. 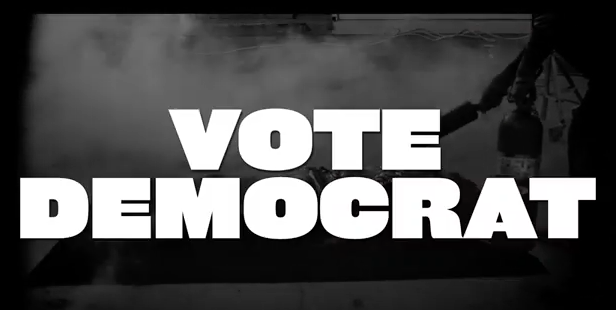 Filmmaker Tony Kaye has always taken an incendiary approach to exposing the nation’s most disturbing problems, from the traumatizing act of anti-Semitism that opened “American History X” to his eye-opening abortion rights documentary “Lake of Fire.” While Kaye has maintained a lower profile in recent years, he continued to churn out a range of multimedia work, and the looming midterm elections have given him the opportunity to deliver bite-sized call to action.

Kaye’s new minute-long advertisement has provided exclusively to IndieWire and is currently being shared by a handful of volunteers canvassing in the state. It features Deven McNair, a professional stuntwoman, being set on fire while delivering an angry call to action. “This year, it’s more than an election. It’s an emergency,” she says. “Things are getting out of control. Republicans are giving billionaires a trillion-dollar tax cut.”

She also calls out the threats to “healthcare, medicare, and social security,” and belts out “Fire the bums!” As she falls to the ground with flames smoldering across her back, she concludes, “If you’re not burned up, you should be!” The advertisement ends with a plea to “Vote Democrat,” followed by a quote from Mark Twain. McNair is a stuntwoman “who has not worked two years,” Kaye said, “because stuntmen take away stuntwomen’s jobs by dressing as women.”

Watch the political advertisement below.

Kaye recently made headlines by announcing plans for his next film, “2nd Born,” which will reportedly feature an actual robot in the lead role. But for now, he’s focused on the midterms, and has distributed the video to colleagues who are canvassing in Texas for Senate candidate Beto O’Rourke. The advertisement was financed by Creative Management Partners co-founder Tim Case.

This Article is related to: Television and tagged Election, Midterms, Tony Kaye