Season 9, Episode 5 bids farewell to its lead character. Then, it gets weird. 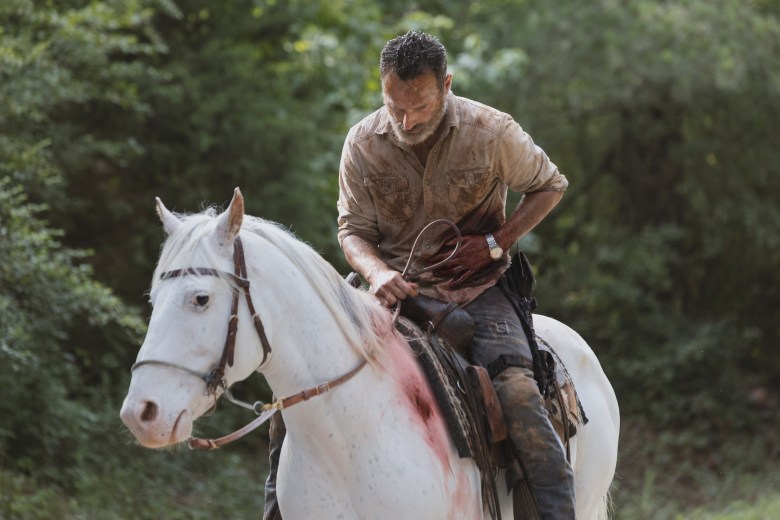 [Editor’s note: Spoilers follow for “The Walking Dead” Season 9, Episode 5, “What Comes After.”]

This Week On “The Walking Dead”

Writing Rick Grimes off “The Walking Dead” is not an enviable task. From the show’s opening moments, Rick Grimes has been our eyes as we watched the world slide into zombie hell. Sure, the show became an ensemble before the end of its short first season, but through all the years Rick has been the constant; he’s the character everyone else orbits around, the one who leads, the one guy you know won’t be killed each episode (no matter how much of a drag that becomes). But now, here we are, with Rick’s much publicized departure. How does the show handle it?

What episode writers Scott M. Gimple and Matthew Negrete have settled on for Rick’s exit is “noble sacrifice punctuated by ‘Christmas Carol’-esque visitations from past cast members,” which wins no points for originality but at least isn’t an epic miscalculation. “What Comes After,” at least before things take a serious turn for the bonkers, is a perfectly acceptable, if somewhat, cliché-ridden hour of television, with some extremely welcome returns.

But let’s get the non-Rick stuff out of the way first. Maggie finally arrives at Alexandria, determined to beat Negan to death with a crowbar. Michonne confronts her but can’t find the words to talk Maggie out of her revenge. It’s a solid scene and it’s good to see Danai Gurira in a scene this season where she isn’t thinking about government or being scared of the concept of baseball bats. 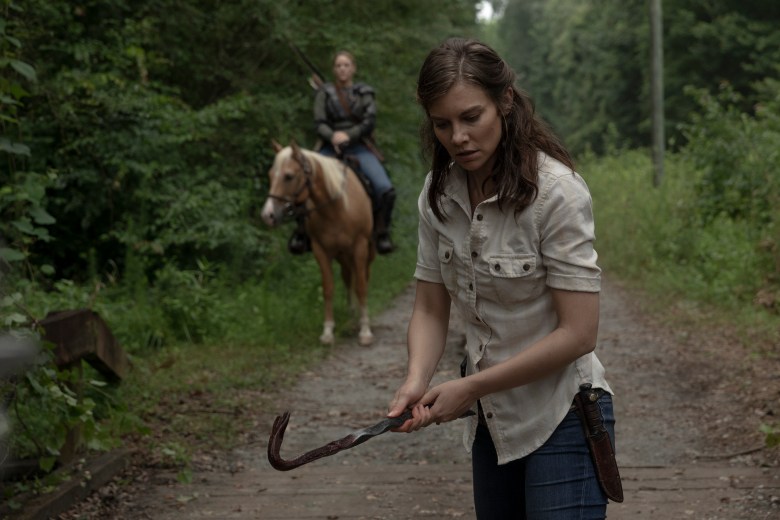 Maggie confronts Negan and while at first he seems like his old, swaggering self, it’s clear that he’s trying to goad Maggie into killing him, because he can’t do it himself. As Negan begs and blubbers before her, Maggie loses any interest in killing Negan, not because revenge doesn’t solve anything, but because keeping him alive is the more apt punishment. It’s the correct decision for Maggie’s character, and while Negan shows his true pathetic colors a little quickly, the episode obviously has other fish to fry.

Rick Grimes: This Is Your Life

As Rick, impaled, slowly leads the massive zombie herd away from the society he’s worked so hard to build, he periodically hallucinates major figures from his past, starting with his old partner Shane, played by Jon Bernthal, who wants to take credit for the viciousness Rick has demonstrated in the past. Bernthal, who stars in Netflix’s surprisingly strong “Punisher” series, is a phenomenal actor, and even this brief appearance as Rick’s violent id gives the episode a welcome jolt of energy.

Much more melancholy is the appearance of actor Scott Wilson as Hershel, who shows up to tell Rick he’s on the right path. Wilson passed away at the beginning of October, adding more pathos to what was already a pretty sweet scene. Hershel was always a calm and moral center on the show, and Wilson brings those qualities to his return.

The special guest parade concludes with Sonequa Martin-Green returning as Sasha, in a role that 10,000% should have gone to Steven Yeun, but since Yeun appears to be emphatically done with all things “Walking Dead,” Martin-Green is a perfectly acceptable substitute.

Sasha, standing on the corpses of everyone Rick has ever loved, emphasizes that death is a part of life, and everyone who has died has simply paved the way for those who come after. Cue “The Circle of Life.” It’s hokey, and this and Rick’s later realization that his real family was the friends he made along the way tips the cliché scale from “acceptable” to “that’s too much, man,” but surely the show has earned a little schmaltz at this point. Considering everything these characters have been through, I’ll happily take the cast singing “Kumbaya” over smashing each other’s heads open and feasting on the goo inside. 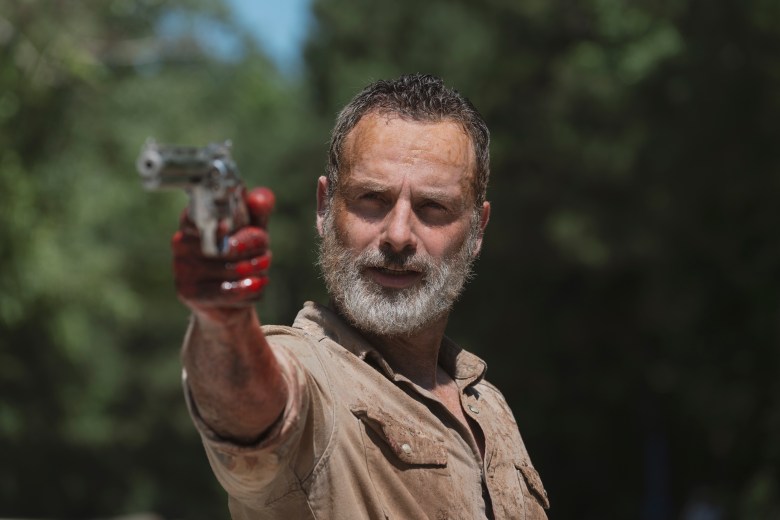 Finally, Rick blows himself and his precious bridge to smithereens, sending the zombie horde into the river to be washed out to sea. The rest of the cast has arrived to see his final sacrifice so that the Legend of Rick Grimes will echo forever into the future. Which would be all well and good, but the episode isn’t over yet.

Rick, defying all the laws of God and man, doesn’t die in the explosion. His body gets swept down the river with the zombies, only to wash ashore right where Anne is awaiting her mysterious helicopter pickup. She tosses him on board and tells him he’s going to live. That’s nuts enough on its own, but “What Comes After” has one major trick left up its sleeve.

After Rick’s helicopter vanishes over the horizon, the scene fades and we’re suddenly with a new group of survivors (including Dan Fogler!) surrounded by zombies. A mysterious sniper clears them a path, and the group discovers their savior is a samurai sword-toting, sheriff’s hat-wearing, young girl named Judith Grimes, many years older than she was earlier in the episode. Cue a collective “Whaaaaaaaaat???” from the audience.

Yup, it’s another time jump, only one that’s several orders of magnitude bigger than the one between Seasons 8 and 9 — these final Rick episodes were all just a prelude to the real story Season 9 was planning on telling. On the one hand, it’s exciting. This brazen a shift in the status quo opens up a myriad of possibilities. On the other hand, it makes the last few episodes a sort of purgatory, a storytelling trifle that, it turns out, was just setting up an even bigger shift in the series. The tighter plotting so far this season has been welcome, but it was all a means to an end. Still, after the last few years, the show seriously needed a shot in the arm, and this qualifies. The real question is if the show can maintain that excitement once the shock of the change has worn off. 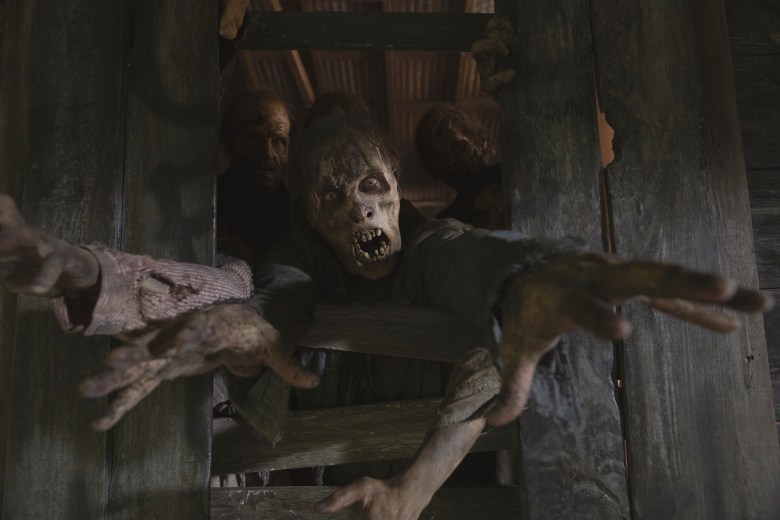 It’s hard to guess how the fanbase will react. If you’re on the fence about the show at this point, this seems like a choice that would either make you excited for the future or swear off the show forever. Is this “The Walking Dead’s” jump the shark moment? Only time will tell.

So yes, Rick lives, because all media properties these days must be multimedia expanded universes. It’s been announced that Andrew Lincoln will star in a series of Rick Grimes movies, on a platform to be determined. These films will presumably answer a number of questions, like “What’s up with all that A and B talk?” and “What did Rick Grimes do to deserve this endless life of misery where he is repeatedly separated from all those he loves the most?” And most importantly, “At what point does a beloved franchise achieve oversaturation?”

Also, does this make all the “Rick Grimes’s final episodes” advertising a tad disingenuous? The creators would say that they played fair, and they really have no intention of putting Rick back on “The Walking Dead” proper, but that’s admittedly a tough pill to swallow. One constant of media is that plans often change. Still, the super fans will no doubt be pleased to get more of Rick in any way they can, and his fate in “What Comes After” has potential. Rick’s gone for now, but in true comic book fashion, he’ll be back.

This Article is related to: Television and tagged Reviews, The Walking Dead, TV Episode Reviews